Like some other users I have problems with nvidia drivers and the new Manjaro update.
I was so lucky that I can boot the system as always, mhwd don´t show any nvidia drivers installed, but I can use my previously installed drivers 430xx which for some reason are installed from AUR repositories by Manjaro Kernel Manager.
So the situation right now is: I have aparently no drivers installed, but I have nvidia utils installed from AUR and I can see that I´m using nvidia drivers 430xx right now, but some applications don´t detect it (I need opencl in some apps and they show me a “no gpu acceleration available”) warning.
I currently have this packages installed related to nvidia: 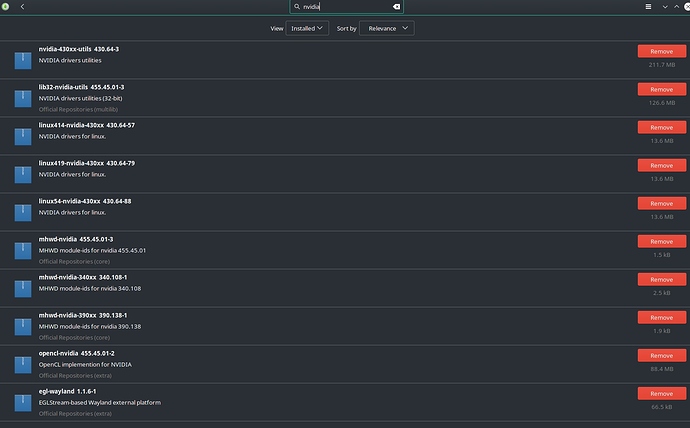 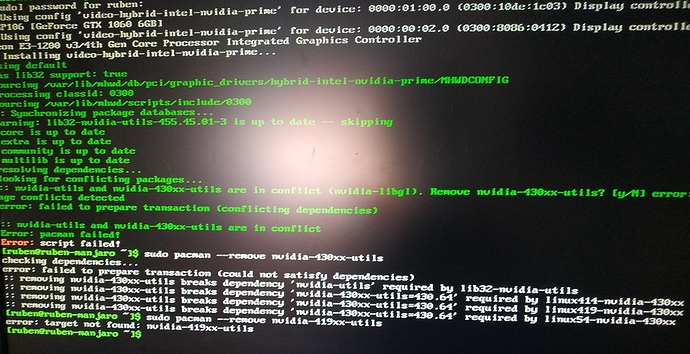 I just, as in not 10 minutes ago, had this exact same thing. The installation and packages for nvidia have changed, quite onviously.

In my case, and I’d suspect your case something similar would be necessary, I had to remove the conflicting packages so that the nvidia utils packages can be removed, and then replaced by nvidia-utils:

After which, I reinstalled the driver with mhwd:

Or so I think.

Anyway, that’s the gist of it, if not the exact steps.

I hope this helps.

But as I said I can´t remove any nvidia-utils packages without uninstalling linux-nvidia packages, which are the kernels and would leave me with no system I think.

I had that worry myself.
But I took a chance and it seems as long as you don’t reboot between removing and installing packages, I was OK, so you should be as well. At least in theory.

had that worry myself.
But I took a chance and it seems as long as you don’t reboot between removing and installing packages,

Oh nevermind, it worked. I could not use

sudo mhwd -i video-nvidia
so I used
sudo mhwd -a pci nonfree 0300
and it installed me nvidia-prime, which I don´t need because I´m not using a laptop but it´s ok, it works.
Thank you so much.

Oh nevermind, it worked. I could not use

It should have been:

But I’m glad you managed!

did you also updated your kernel that you chose

in my case i have linux59-nvidia but there is what appears to be a new 59 in the repos.

Now that you mention it, it does seem familiar. I can’t remember specifically, but it DOES look very familiar…

Sorry that’s all I can give with honesty.

also,why didn’t you install the

als,why didn’t you install the

Because it conflicted with the nvidia-utils package. I’m guessing that’s the new ‘name’ for the package. Or something.

not sure I will update my laptop with hybrid nvidia for a while.

Edits: everything with more than two steps I consider a huge hassle

I had the same issue and black screen.

You removed nvidia and installed the umbrella ‘latest kernel’ package …
So … uhm … you didnt have a good working kernel?
And you dont need or want nvidia?

Seems more to me that you took a chainsaw to your situation and it happens to boot … likely by using generic fallback drivers.

(which honestly is surprising on a 1080 … I didnt think nouveau worked … maybe more likely is you have an optimus or dual-gpu setup ? - meaning the nvidia-only driver should not have been used, but now that its gone you are relying on the [intel?] iGPU)

yes, I think it is a simple fallback solution. But it does work.
Next steps are straightforward: remove old (if any) conflicted nvidia driver. In my case (Ti1080):

Nouveau works but “no acceleration”

did you also updated your kernel that you chose

Sorry, saw it just now.
Yes, I decided to upgrade my kernel while I was at it.