Another stable branch update with some usual updates for you. 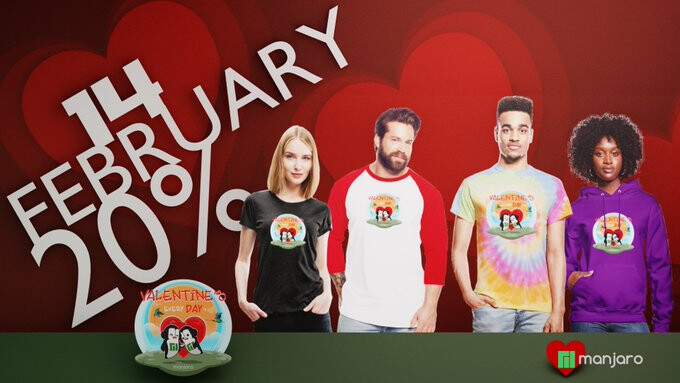 Don’t miss out on 20% discount on all of our #Merch! Visit the store today!

Checkout our latest spin of Cutefish!

A detailed list of all package changes may be found here.

Just finished the Upgrade on Manjaro XFCE and everything went smooth so far. But now Pamac shows me that there would be an upgrade of qt5-styleplugins to version 5.0.0.20170311 in the AUR. I also did not originally install this package from the AUR, as I understand, it was installed automatically and my possibly be a system relevant component of qt5 (The dependencies are qt5-base and gtk2). Could you guys correct that? Many thanks!

qt5-styleplugins was dropped from the repos as part of dropping GTK 2 packages. GTK 2 has reached its end of life: GTK 4.0 – GTK Development Blog. You may continue using it from the AUR if you wish.

Small issue noticed right away with my conky… it appears that the font line spacing has increased, so my conky is vertically longer than normal. Here is my conky font config:

Noticed fonts were touched in this update, but makes me wonder… was there always an issue that is now corrected, or was an issue introduced, or do we have some extra controls somewhere where I can change the line spacing?

Running with the idea that this is a correction to learn to work with… I have resolved it in conky by:

How can I remove GTK2? As far as I can see in Pamac, GTK2 has been installed automatically in version 2.24.33-2 (legacy) and has dependencies to viewnior, gimp, hexchat, to the AUR package anydesk-bin and others. What should optimally be removed?

You can wait and see if your programs will update to GTK 3 /4 or find a replacement program that is.

That’s due to the recent changes to the linux-firmware package. Note these are warnings, not errors. You only need those firmwares if you have Mellanox Spectrum switches, Marvell devices, Qualcomm SoCs, Cavium LiquidIO server adapters, QLogic devices and Broadcom NetXtreme II 10Gb ethernet adapters. if you have that hardware you can install linux-firmware-qlogic to get rid of those warnings. If you do not have that hardware you can safely ignore those warnings.

Please can you advise how I can check whether qlogic devices are fitted to my laptop. For example is there a simple option for mhwd or hwinfo to do this?

I’ve been using steam-manjaro and AFAIK it doesn’t depend on gtk2 so long as you don’t install two optional dependencies:

I’m pretty sure steam-manjaro was pre-installed for me in KDE Plasma, the above two options are not selected/installed, and I’ve had a great steam experience since July 2021.

I was able to uninstall qt5-styleplugins without any problems, it just has been in the orphans. But after I deleted this, the Kvantum manager was also removed. I didn’t install it myself, it was pre-installed when I set up my Manjaro a few years ago. Is this how it is intended in Manjaro Xfce?

Kvantum was installed as a dependency of one of the dropped themes. You can always reinstall Kvantum if you would still like to use it.

What is the release number for this?

After the update I started experiencing screen tearing. restarting fixed it

Either way, you can check with

“The solution is in /usr/share/fontconfig/conf.avail/60-Latin.conf edit to move DejaVu Serif, DejaVu Sans, DejaVu Sans Mono to the top of each block”

Again, this update has gone smoothly for me. As other users have reported before me, I only noticed that the default monospaced font has changed from DejaVu Sans Mono to Noto Sans Mono with the fontconfig update. However, I don’t consider this change to be a problem so far, as I haven’t been able to see it causing any issues, and I think I actually like it.

After the last update I can no longer log into my system (KDE). At first it affected only the log in screen (sddm) and I managed to log into TTY.
After choosing “other” and typing my username into the field, password was also accepted.
Sadly I was stupid enough to reboot my system once more and now cannot log in with either method.

Before the reboot i tried to change my password with passwd but received the following error:

I would like to attempt to roll back my system via timeshift.

Am i correct in the assumption that the process for this would be to:
boot from live cd,
chroot into the system,
mount md0 (the raid10 array that holds the system backups (rsync)),
then issue sudo timeshift --restore?

Thanks for your help. Please also feel free to split this off to correct support category.
Cheers Beer!

Update:
After restoring last nights snapshot and dealing with some grub problem which in turn forced me to update the system while reinstalling grub, things are back to normal for now.
Still no idea what may have caused the inital password problem however.

Quick question, after the update I’ve got some interesting danglers…

I consider these vital packages, so I’m wonderiing whether this is intentional?

P.S. I use the minimal install, if that’s relevant.