Sleep on lid close is not suspending system

For the last week(ish) iv started to notice that when i get up in the mornings and open my laptops lid that the computer has been on (awake) all night.

I have been keeping an eye on it and it sometimes sleeps properly on lid close but other times when i close the lid the system remains on, the screen remains lit (kinda) and my Bluetooth headphones keep disconnecting and reconnecting for as long as i leave it.

On opening the lid it is all still running, although some things are down and have to be reconnected like the network manager and plasma.

It looks like its not just the lid that causes the problem it also happens when i use the menu / sleep.

Darn, Just got up and my computer has been awake all night again. I dont know where to start or what to do.

Two years is been fine but i think it was the last update, maybe the previous one, thats caused it.

This is the issue:

Some software or hardware addition prevents the system from going to sleep. This used to happen with Spotify if Bluetooth headphones were used, but that was corrected a while ago.

So the only advice I can give is:

Thank you for taking a look at the logs for me.

I have not recently added any hardware. I can try to eliminate software although its a very intermittent fault and not something i can keep checking and checking as it takes a little while to sleep/wake so it’s going to be a long and drawn out process

Im not even sure how i might close some things like how would i “close” the bluetooth, wifi or the audio on my system, i dont know they have just always been there.

EDIT:- ok i do see a switch on the GUI for the wifi and bluetooth to turn them on/off. I assume that will be enough to test them.

I was hoping there might be a way to use journalctl with a specified filter that would help point to what is causing the suspend to get “stuck”?

Im not even sure how i might close some things like how would i “close” the bluetooth, wifi or the audio on my system

Turn on air plane mode, that takes care of both WiFi and Bluetooth: 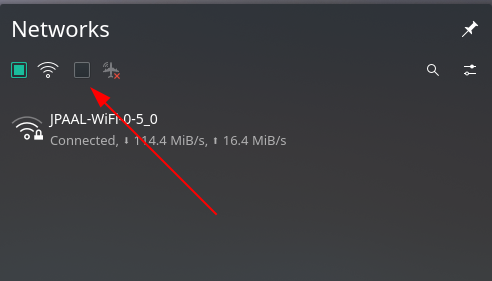 I was hoping there might be a way to use journalctl with a specified filter that would help point to what is causing the suspend to get “stuck”?

So there was nothing in mind regarding this comment? i mean the system is quite aware there is something that is “hanging” and forcing sleep to resume again, is there no way to get the logs to tell us what that is exactly?

Ok, This bug is way too intermittent to debug by a process of elimination. It was 3 days before i did it again and then it did it several times in a row & now its not doing it again.

I did get a slim chance to try turning a couple of things off. I found that when i switched off firefox (which was on youtube with a video window open (but not playing)) It seemed to allow it to sleep again, although it may just have been a coincidence.

More interesting i have found several urls of importance, the main one is here
https://01.org/blogs/rzhang/2015/best-practice-debug-linux-suspend/hibernate-issues

I have been trying to follow but its going to take another few weeks of learning as its mostly way over my head.

Anyhow, i have currently set my kernel back to 54 (the last LTS), it will take a week or so to see if its going to help or not.

I am likely to have many questions about the site i linked above though.

Where do i put these “arguments” ?

e.g. Adding the initcall_debug boot option to the kernel cmdline will trace initcalls and the driver pm callbacks during boot, suspend, and resume

Where do look for their output? (will it be in the journalctl somewhere?).

I shall keep plodding onwards.

This [HowTo] I wrote shows you how to change kernel parameters:

As I see too many people using a hard power off during freezes, I’m creating this small tutorial on how to turn off your computer when everything is frozen. Whenever you see someone saying they had to “Power Off” or “Hard Reset” their system without mentioning they had to REISUB their system, send them here!

(and it’s a good to have that activated anyway). The bit where the kernel parameter gets changed is:

where the kernel parameter being changed is kernel.sysrq=1 so just substitute yours for that one (I don’t know, but it’ll probably be initcall_debug=1, check the article)

Its all just to much. I wanted help to make things a little easier not twice as much techno babble as before. Appreciate the help though.

Regarding the argument itself, it was just an example. The link i gave list many many for debugging this problem but this is just the first one. It does not say to use an “=1” anywhere?

Adding the initcall_debug boot option to the kernel cmdline will trace initcalls and the driver pm callbacks during boot, suspend, and resume. It is useful to check if any specified driver/component fails. Make sure to always enable it when debugging STI/STR/HTD related issues. In general, positive results mean the callback has no error/warning and returns 0 in a reasonable time. This is demonstrated in the following:

Negative results means the callback either contains some error/warning, or it takes an unreasonable long time to complete.

After adding it (or any of the others) you still didnt say where i should look for their output?

I wanted help to make things a little easier not twice as much techno babble as before.

Suspend issues are difficult in any OS. (including Windows)

Yup, you can do that too. I just thought the command would make your life easier.

After adding it (or any of the others) you still didnt say where i should look for their output?

The following are a few good starting points:

Sorry for making you read even more, but I can’t give you a silver bullet to make this work on your system with your hardware with all of your applications as I don’t have access to your system… (It would take me some thorough investigation too…)

Yea sorry, i didn’t mean to sound harsh its just im banging my head against a wall of “i don’t understand” for the last week and im still nowhere really.

I did manage to get a relevant app to work (i think its working, not 100%sure). This is my system doing a sleep/wake cycle. I just need to try and run it while its failing which is no easy thing and then try and understand what its telling me, its pretty though.
https://i.imgur.com/prz6xgP.png

So can i just use /etc/sysctl.d/99-sysctl.conf ? Mine is empty atm so can i just append a load of switches/arguments (whatever they are called).

So if i just make it like this is it ok?

and then save it I don’t need to do an update-grub just reboot (i assume) and all these 3 arguments will be active? How will i test that they are actually active and ready to capture my next sleep failure as that could be days away and i dont want to miss it?

So can i just use /etc/sysctl.d/99-sysctl.conf ? Mine is empty atm so can i just append a load of switches/arguments (whatever they are called).

How will i test that they are actually active

look at the different messages you’re getting during boot:

The first command will give you the first 25 lines of the previous boot whereas the second command of the current boot. You should see the parameters applied.

ready to capture my next sleep failure as that could be days away and i dont want to miss it?

As I said earlier:

P.S. I think you should read this to have a laugh or 2:

Remember when you installed your very first Windows, added bells and whistles and then couldn’t see the trees for the wood any more and had to re-install? Well, you’re in the same situation now: You’re a N00b again! Embrace it!

Right now you’re thinking: Why is this so much more difficult than Windows?

Whereas in 6 months time you’ll be like: Why can’t I make Windows jump through

OK, so here are the main differences: …

because I can feel your pain…

As I said earlier:

Yea but its not just a case of sending it to sleep, i can do that all day long. Iv even got a bash script to sleep/wake on constant rotation on/off/on/off… no. Its a case of catching it when it decides that on a random particular sleep it’s going to fail and stay awake. It only does it on occasion, I can not force it i just have to wait for it to happen.

P.S. I think you should read this to have a laugh or 2:

Yep very funny & interesting. I wish i had the time, iv been away from windows for 2.5 years now. I know quite a lot but my memory is not what it used to be and if i don’t use something for a good while i WILL forget it. I try to keep organized cherrytree notes of every problem iv had and how i fixed it in the end but its never enough.

Iv been trying all night but i dont think this is working.

But when i reboot i catch a glimpse of the red error that I found in the kernel logs that says :-

I looked at the head of this boot but i dont see anything, although i dont really know what im looking for.

Is it working or is it not working, i have no idea:(
Iv searched everywhere and i can not see exactly where or how to use these arguments?

iv tried initcall_debug=1 (even though i have searched just about everywhere and nowhere do i see an “=1” in any examples or description) but lets try it anyhow.

ok iv rebooted, now how do i know if its working?

So it dont look like it is “initcall_debug=1” either?

I’m not familiar with these specific kernel parameters, but in my experience you need to turn on debugging options while compiling the kernel and that’s not a road you want to go down.

Release candidate 2 for the 5.9 kernel has been released, so you could try that, but that’s beta software and for something that’s happening every couple of weeks I wouldn’t go down that road…

I’m re-iterating what I said before:

If it happens, look at which piece of

Iv finally managed to get the kernel options working but now i have another problem.

I want to do the stress test because its a very intermittent fault and i can’t reproduce it to order.

on the instruction site it says :-

rtcwake is a tool that can be used to enter a system sleep state (suspend/hibernate) until a specified wakeup time. And you can easily use it to perform suspend/hibernate stress tests. For example, you can use this simple script to run 1000 STR cycles easily

But when i create a shell script and run it it refuses to see the -s argument and throws an error:-

but I can run sudo rtcwake –m mem –s 30 just fine in the terminal?

But when i create a shell script and run it it refuses to see the -s argument and throws an error:-

Check if the - is really a - and not some copy/pasted – (which is a whole other character). Edit your bash script, and enter it manually via keyboard.