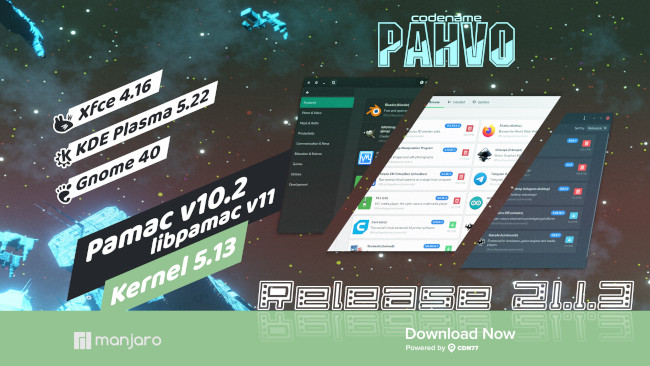 Since we released Ornara earlier this year all our developer teams worked hard to get the next release of Manjaro out there. We call it Pahvo.

This release features major improvements to Calamares, including filesystem selection for automatic partitioning and enhanced support for btrfs. For btrfs installations, the default subvolume layout has been improved for easier rollbacks and less wasted space on snapshots. Additionally, swapfiles on btrfs filesystem are now supported.

The Gnome edition has received a major rework the update to Gnome 40. The default layout has been redesigned to follow more closely upstream defaults, with some adjustments to reduce the pointer travel for users who prefer using mouse with gnome.

For users that preferred the old vertical desktop layout, we have the Manjaro legacy layout, which mimics the previous gnome defaults. We made sure that all the layouts shipped with gnome-layout-switcher still work after the transition to Gnome 40.

Firefox now comes with the gnome-desktop style theme enabled by default for more consistent look with the desktop, but this can be toggled with one click from gnome-layout-switcher for users preferring the native Firefox look.

Plasma has become more pleasurable to use through improvements to the design and greater smoothness and consistency in transparencies, blurs, icons, and animations. Moving things to accessible locations, offering hints and visual cues, and creating new settings allows you to customize your work environment to make it fit perfectly to your needs. Following the true KDE spirit, the push for a more stable and attractive desktop does not mean you have to renounce control over how you want it to look or behave. Plasma 5.22, as always, packs all the flexibility and tools for customization you have come to expect and love, and some more to boot.

Meanwhile, the push to move Plasma in its entirety to Wayland (the display protocol of the future) continues in full swing. By using Wayland behind the scenes, Plasma is able to include features and bug fixes not possible to implement on X11, offering you a better experience and more stability. We also revisited a set of applications installed by default. Removed Konversation and replaced Cantata with Elisa. Additionally we provide Plasma browser integration support for desktop out of the box so now you need only one browser plugin.

Kernel 5.13 is used for this release, such as the latest drivers available to date. With 5.4 LTS-Kernel minimal-ISOs we offer additional support for older hardware. We also updated Pamac to 10.2 series, which brings support for libpamac 11.1, a new gtk UI, now by default the GUI is optimized for the desktop and we introduce a version, optimized for mobile (launched with pamac-manager --mobile).

We hope you enjoy this release and let us know what you think of Pahvo.

The manjaro.org/get-manjaro page still points to 21.1.2.

Please ship with kernel 5.14 from next release.

You can simple install it: sudo mhwd-kernel -i linux514

It’s still too early to do so.
And as @pheiduck suggested, what’s the issue to install 5.14 post-install afterwards?

You can simple install it: sudo mhwd-kernel -i linux514

It is unable to use 5.14 on LiveCD if not to build that LiveCD by yourself (Building your custom Manjaro ISO via Github Actions CI - YouTube).

Why not to make an ISO w/ included several kernel versions:
5.4,
5.10 (default)
5.13 as current stable
5.14 as feature-rich (for example for btrfs installations)
?
This make users to be able to choose a kernel version during LiveCD boot up.

It’s still too early to do so.

Why to have only the one kernel for all? Why to restrict ability to choose it? Why not to have several included?
You will use your 5.13, me and @Computer_Email23 will use 5.14 during installation.

And as @pheiduck suggested, what’s the issue to install 5.14 post-install afterwards?

One of the points is:

The Btrfs code base is stable. However, new features are still under development. Every effort is made to ensure that it remains stable and fast at each and every commit. This rapid pace of development means that the filesystem improves noticeably with every new Linux release so it’s highly recommended that users run the most modern kernel possible.

Why not to make an ISO w/ included several kernel versions

This make users to be able to choose a kernel version during LiveCD boot up.

It’s not because an iso would be bloated with 4 (!) kernels that users would have the ability to choose it like that. It would require a development modification of LiveCD boot up or Calamares to achieve that.
Unless overloading every Manjaro user new install with four kernels…

Some new users are already lost with the choice of free or proprietary drivers at boot. Adding a list of kernels to pick is not really beginner friendly in my opinion.

Why to have only the one kernel for all?

Because it works for the majority without anything to do.

Why to restrict ability to choose it?

Those wanting to change kernels have some Linux knowledge. One can build a custom system with Architect or from the manual Arch way. Or simply adding new kernels with mhwd.

To execute new installed kernel it need to reboot, after reboot that ISO’s kernel version will be loaded - so 5.13 only. ISO should be changed to load another kernel.

I still don’t see what would be the problem to perform a standard installation with Calamares and 5.13 kernel, not rebooting immadiately but chroot into the installed system. Then install (or uninstall) any kernels and additional packages you want.

After a reboot, you will have 5.13, 5.14 kernels, Brave, Vivaldi, Krita or Lutris already installed at your first fresh boot.

Can anyone confirm if a bug exists in Calamares (installer) for Manjaro 21.1.3?

This one is hard for me to test, because I came upon it for a friend’s new installation (from scratch.)

The installer immediately closes when it gets to the step where it begins to install your system, and more specifically, when it proceeds to format the root filesystem.

However, if I format the filesystem ahead of time, the installer has no issues.

In other words, it doesn’t matter if I choose Ext4, XFS, or Btrfs during the installer’s setup, as long as I choose to “format” the root filesystem, it predictably crashes the installer once it gets to that part. I can confirm that no such formatting took place, as the partition still remains as “unformatted” when I check it under parted or KDE Partition Manager.

If I format to Ext4 or XFS ahead of time, and simply tell the installer to “use and mount to /” (but not to “format”), then it works fine and completes a successful installation.

Calamares also broke off at this point for me yesterday. At the second attempt it has then worked. So YES, I can confirm it.

@winnie, @Therion
Thank you for point this.
If you somehow collect and still have a log (e.g. journalctl or Camamares itself if it logs by default) and crash dumps from that LiveCD session than it would be very helpful to understand the exact reason.

What are the exact full names of the ISO used where Calamares crashed?

Did a hash check of the image and compare to shared one before to burn it into installation media?

I do not have a log, because I immediately tried again afterwards. The ISO was the 21.1.3 minimal KDE