We are happy to announce our latest release of Manjaro we call Nibia. 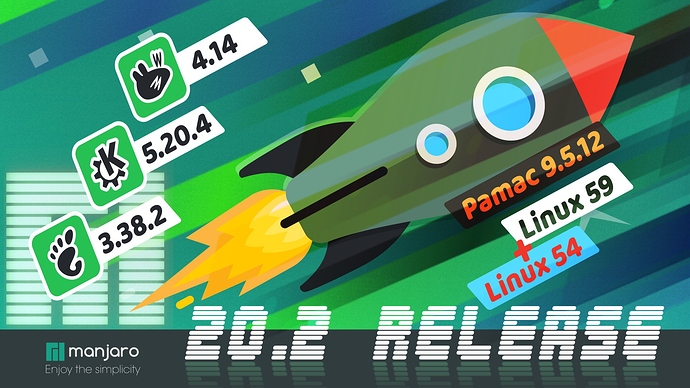 Nibia is a planet with multiple moons. In the year 2285, during his mission of vengeance against James T. Kirk, Khan Noonien Singh swore that he would chase Kirk around the moons of Nibia and beyond before giving up. (Star Trek II: The Wrath of Khan)

Gnome edition is the epicenter of new exciting features. It received a major overhaul, possibly the biggest update thusfar.

Manjaro’s Application-Utility got also many improvements, letting easily choose your favorite browsers, office suites and password managers. We also included two excellent forms of automatic window tiling: the intuitive Pop-shell and the touch friendly Material-shell. These can be enabled in the Gnome-Layout-Switcher.

Keybindings have also been improved to manage virtual desktops more efficiently. Automatic dark mode has gained more granular controls and also let’s you automatically change the theme of qt applications as well. Gnome edition also now comes with boot splash and graphical password dialogs for encrypted systems. We also trimmed the desktop so that it should now use approximately 40% less ram than before. We now also default to using Wayland on non-Nvidia hardware.

Our KDE edition provides the powerful, mature and feature-rich Plasma 5.20 desktop environment with a unique look-and-feel. The new release features Wayland improvements, grid-like system tray, new power saving options, improved settings-center, touch support in dolphin and much more. With a wide selection of latest KDE-Apps 20.08 and other applications Manjaro-KDE aims to be a versatile and elegant environment ready for all your everyday needs.

With our XFCE edition, only a few can claim to offer such a polished, integrated and leading-edge Xfce experience. With this release we ship Xfce 4.14. The stable Xfce pairs well with the cutting edge rolling release that is Manjaro, offering reliable performance with no surprises.

Kernel 5.9 is used for this release, such as the latest drivers available to date. With 5.4 LTS-Kernel minimal-ISOs we offer additional support for older hardware.

We hope you enjoy this release and let us know what you think of Nibia.

For some reason user-manager was still part of the profile, which pulled in user-manager-git. This way the build of 201203 shipped partly with git-packages. This got now fixed with 201207 Install-Medias. We will provide a script to fix that on installs done by the 201203 ISOs. Older installations of Mikah should not been affected by this.

I get full speed here. Make sure you choose a mirror close to your location when your are on the OSDN page:

Ok, but I tried to use a torrent.

No probs here. I have downloaded them all already and seeding now.

We also trimmed the desktop so that it should now use approximately 40% less ram than before.

It seems those changes are only available to new installation. Are those trimmings reproducible on existing Gnome installations and how hard that would be?

One of the team members have explained this here.

2Gb can be enough for gnome if you configure it right and do only light tasks as you planned. Do you have swap configured? If not, I recommend using a swapfile, as running out of ram is one possible cause for system freezes. I also recommend using as few shell extensions as possible for maximum stability. Shell and gtk theme adwaita-maia can also be good for tablets, bacause of the larger titlebars. To reduce ram usage, avoid using gnome-online-accounts and uninstall evolution-data-server. Th…

@emke and @Chrysostomus Thank you!

I am so excited! I am a like a kid at christmas opening presents. lol So I just installed a fresh gnome and the WOW factor is definately there. It is so snappy compared to PoPOS. No problems to report so far.

Hats off to all involved and thank you!

You can find a release announcement at distrowatch:
https://distrowatch.com/

A post was split to a new topic: Screen brightness

Wasn’t able to boot the install media with 6800XT, tty screen came up ok but the KDE desktop failed. (black)

Is there no magic trick I can try in the boot line to resolve this.

The solution is to install Architect and then chroot linux-mainline before restarting. There are other steps but that’s basically it.

Did you also tried the ISO with linux54 kernel?

@philm, when will you allow installing with the ESP on /efi ?
I currently mount my ESP on /efi and do a bind-mount of a subdir of the ESP as /boot.
This setup will work for all boot-loaders…
Using /efi is by the way the recommended place to mount the ESP see The Boot Loader Specification

That is simply not true,
Both /boot and /efi are fine as long /boot is not on a separate file system, that is not recommended. Since this is not the case with Manjaro it does not matter a bit.

That is simply not true,
Both /boot and /efi are fine as long /boot is not on a separate file system, that is not recommended. Since this is not the case with Manjaro it does not matter a bit.

You are wrong…see this quote:

This placeholder file system shall be determined during installation time , and an fstab entry may be created. It should be mounted to either /boot/ or /efi/ . Additional locations like /boot/efi/ , with /boot/ being a separate file system, might be supported by implementations. This is not recommended because the mounting of $BOOT is then dependent on and requires the mounting of the intermediate file system.

Note the parts i made bold especially the underlined parts…
Because most distributions, manjaro inclusive, mount the ESP at /boot/efi they all fall into this category of “not recommended”…

Very nice release ! I also love the boot splash, but sometimes it shows up and some times it don’t. Still didn’t understand why.

Indeed as it says. With boot being a separate file system… that part is also important and that is not the case with Manjaro by default as it is also not with (most) other distro’s.

Also you simply claim only mounting on /efi is recommended and according to your own quote that is simply not the case.

Rolling your eyes does not change that fact, sorry

Note I do not question you legit question, but only the claim you add to it.

Installed it today but the KDE Plasma version is very very laggy, any idea what might cause it?