Ran into a problem of black screen at boot (after plymouth screen).

I’m using KDE and sddm seems to have a little bug now that it doesn’t open in the right tty, so some users might be able to switch tty (most like to the second with Ctrl+Alt+F2) to go into graphical interface.

For my part, I couldn’t switch ttys. It simply stayed a black screen.

Disabling sddm-plymouth and enabling sddm didn’t help, but when I downgraded sddm to one version back, it finally booted for me (as the new bug has been introduced in the now-upstream version).

I did this with chrooting into my installation and execute these commands inside my manjaro-chroot:

Then exiting chroot and rebooting into my installed system. Worked fine then. I currently have work to do, so I can’t further investigate this issue (whether it really solved it or it was just a lucky boot). I might investigate more these days.

I hope I could help another user with the same problem.

This was the site which gave me the idea to downgrade this package: bugs . archlinux.org /task/70528

I had to install Kernel 5.12 from the Terminal. The Manjaro Settings Manager will not install 5.12.

MSM did the business for me on Testing.

Got this error 5min ago, and as pointed previously, it crashes my PC and requires reset button to be pushed.

Let me know how and where I could better report this issue, I’ve been using linux for 2 months 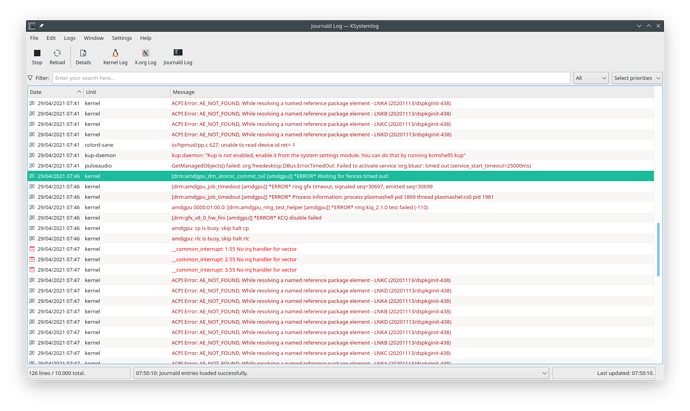 This release broke Virtualbox, tried to fix, no success.

KDE with kernel 5.10.32 LTS, systemd-boot and SDDM. Everything seems to work, but I noticed some strange things during startup after upgrade (rebooted multiple times, the issue exists):

both fstab and crypttab contain valid entries and RAID is automatically decrypted during boot just fine. It’s just that glitch with ? mark…

Upgraded today with “pacman -Suy”, without issues, and after reboot the system seems to be fine, BUT:
when I try to access (i.e. mount) a partition on an internal HDD (which is not used right-away, but is just a destination for occasional backups) Thunar refuses with error message

As always (for me anyway) everything went smooth on my laptop with KDE. Thanks again to all the gang at Manjaro.

LightDM will no longer start reliably with the 5.10 kernel on my AMD 3900x with AMD 5600xt graphics. I’ve reverted to the 5.4 LTS, but now I’m also having issues with the audio output being very distorted, tinny and scratchy. Killing pulseaudio seems to work for a while. Anyone else having audio issues?

After the update, including kernel 5.12 update, all of my VirtualBox guests, Windows and Linux, now have distorted, crackling, reverberant sound.
EDIT: Same with kernel 5.11, so it is caused by regular software update.
EDIT2: It’s an issue of VirtualBox 6.1.20 as stated in VirtualBox forum. After I downgraded to 6.1.18, the sound is normal again.

All good, except that the first time I opened a Konsole, I was greeted with a very unwelcome and intrusive new toolbar, which also had the effect of forcing the window to be much wider than usual.
After a lot of random right-clicking and trying options, I found that I could get rid of it, though annoyingly I can’t remember the precise sequence so can’t leave a solution here. But it was to do with showing toolbars in some way…

I’ll give this a try. Thanks.

I have issue with Firefox Developer Edition. When I start it, it crashes graphically, I see just fragments of the image shown in it. I downgraded it for now to a previous version…

Settings > Toolbars Shown > disable the checkboxes to both (all) toolbars listed

Major problem on one machine.

I know it has Intel graphics and a 4-core Intel processor, but since I can’t get in I don’t have other details. (It’s an old-style Zareason media station for what that’s worth).

I’ll try to find an install USB stick and try to boot it off that, and check the H/W.

On initial reboot, I had a similar issue with my primary machine (AMD/Radeon hardware) but after pressing reset it came up fine the second time.

Edit: nvm it was right there in the screenshot 🤦🏼

I rebooted with Linux kernel 5.4.114-1, and Thunar now mounts the partitions on my spare drive without errors.
Strange

After that, I rebooted with 5.10.32-1 again, and now the error has gone away. Didn’t change anything, apart from 2 reboots.
Should anybody have an idea: more than welcome. Will keep it “under further investigation”

EEEK!!!
Now I can’t get the system running off the USB, comes up with the boot menu but just gives a black screen on booting. Even though it was working just fine for the update (and was booted for that so it seem unlikely to be a harware issue).
Running memtest anyway.