Plasmashell has a memory leak

After a single day: 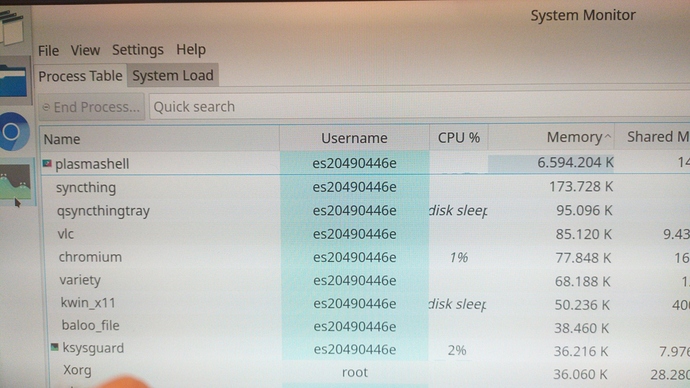 are you using dev or git packages?

Also … you know well enough not to post screenshots when text/data is possible.

Everything is from stable. Except Kwin, which is the lowlatency alternative from the AUR.

Do you use any plasmoids that are manually installed, i.e. not bundled with Plasma itself? From what I’ve heard, they are the usual culprits of causing Plasma (or Latte Dock for some of you here) to leak memory.

In my setup, I use Event Calendar, Grid Kickoff, Virtual Desktop Bar, Show Desktop (Windows 7 style), and Latte Spacer for my external plasmoids, yet plasmashell leaks memory a lot slower – about 500MB per day, but plasmashell’s memory usage never went over 2GB.

That bug report is atrocious.
But at least you added this response to a comment:

Although Deepin and Cinammon are also installed on this system.

So thats slightly more information than filing a bug with nothing but a screenshot of the Monitor.

Seriously - have more respect for other people than that.

Everything is from stable

… I didnt ask you what branch … I asked you if you were using git packages.

(and in case you need reminding: How to provide good information)

You reported in the wrong place, try here :

Also AUR packages are not related to our packages.

Do you use any plasmoids that are manually installed

No. The desktop is as minimal as it can be:

It displays an unrelated package: archiso-git

Kwin has its own process. So I’m guessing it’s unrelated, isn’t it?

After uninstalling the rest of desktop environments the problem seems gone.

No, the problem is still there.

Hi, i am using manjaro stable, kde plasma. plasmashell is 5.20.4. I did not install any widgets, other dm’s, fancy stuff or services except cups. Immediatly after logging in, plasmashell continously increases its size. on my 4 core CPU, there is also considerable cpu use (5-20%,variable ) on a totally idle machine by plasmashell. I already found year-old problems of plasmashell 5.x with a memory leak, that is said to have been patched in 5.18, but this reminds me of it. I found others tha…