I’ve been running Manjaro XFCE for nearly a month now and I’ve noticed that the fans don’t work after every other boot.

Here’s a short summary of what I have on the laptop:

Not sure what I should do to get the fans running for every boot.

Also, does Manjaro support enabling turbo boost on my CPU?

Seems your fans are managed by linux and not by the UEFI. The fans starts working depending on the heat. And if the heat is not high, the fans can stop completely. So I imagine that you start your laptop after a while as it was shut downed. The heat is not high and therefore fans don’t start. After a while they should start.

Since you have an ASUS Laptop, have look here:

maybe your fans indeed have a problem,idk.
but i had that impression when i moved from windows to manjaro,and it ended being that the cpu governor was set to powersave which i changed to performance,and now i can hear them ramp up.

Hello i just got here from windows where the fans would be quit active and loud; obviously while gaming,but even when opening multiple YouTube tabs one after the other and also in other various scenarios. on manjaro i can barely hear them and their rpm rarely increase; in the YouTube example i mentioned they do ramp up,but just a bit.(i haven’t gamed on it yet) i assumed that might have to do with Linux being less demanding/resource hungry and maybe also run less background processes. then…

I see what you mean. How did you figure it out? Trying to understand how Manjaro shows the way it’s configured.

Also, is there a way to enable turbo on my CPU? I’ve set my governor to ondemand. Just wanted to check if it works well.

As i quoted, turbo boost is enabled:

To check this the simple way, with onboard tools, open a terminal and type:

Then open a second terminal let the cpu work:

You should see that the cpu freq goes up.
This kills the cputest:

Maybe another terminal to watch the temperature:

How did you figure it out? 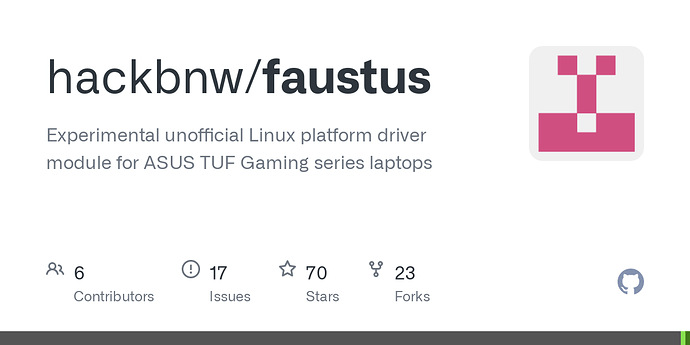 Install this and you will get the control over your fans and RGB back-lighting via the keyboard shortcuts just like it is on Windows. We have the same laptop btw

I’ll try this and update this.

Tried doing it but get these messages from the terminal.

Next, I rebooted and now my lights aren’t working using FN + Up or Down arrow keys to change the RGB brightness.

I think you are missing the dkms modules.

You can install it from the Pamac Manager and also make sure you select the right linux-headers version under the shown optional dependencies.

Do I need to install this first then faustus?

I can’t seem to find cputest in AUR. Do I get it from GitHub?

This is the whole cputest:

What do you need more?

Run this and look at the taskmanager. You will see cputest there.

I was getting this, so I thought it was an executable I needed to download.

I was getting this, so I thought it was an executable I needed to download.

Ah kk… sorry. Thought i could replace yes with cputest. I tested it on my machine and it worked with cputest, however this should work:

I guess this is the expected result of maxing up to 3.5Ghz?

yepp, it starts on every single possible core a process and upscale it to the max frequency. That is all what it does.

It depends on your kernel. Can you show the output of uname -r?

Then select the linux-headers package.

That seems to work. I can see that TUF Controller shows the 3 modes and I’m able to switch it via the FN + F5 key.

However, it looks like reaching 70°C doesn’t show the fans running on the sensors.

Could that be an issue of the sensor monitoring software?