I hope you are doing well.

I recently installed the latest version of Manjaro on a laptop with an SDD (using a USB flash drive) and the system doesn’t start properly. I get a black screen and the following message:

The kernel is 5.10.36-2-MANJARO and I have created three partitions (EFI, swap and ext4 for the operating system). I used Gparted to enable the ‘boot’ and ‘esp’ flags on the EFI partition.

I have already disabled both secure boot and fast boot on the BIOS (this is an Asus VivoBook). I think that I don’t have to change anything else on the BIOS because I tried installing Ubuntu and it works (just to make sure that I wasn’t missing something on the BIOS, I obviously prefer to use Manjaro because I love Manjaro).

What can I do? Thanks in advance.

Boot a live session and open a terminal:

Thank you. I opened a terminal on a live session and ran the commands, here’s what I got:

Use ‘blkid’ to print the universally unique identifier for a device; this may
be used with UUID= as a more robust way to name devices that works even if
disks are added and removed. See fstab(5).

Is there a problem with GRUB? Maybe something is wrong with ‘/dev/sda1’. If I open the KDE partition manager, the partitions look a bit different:

Do I have to change the partitions? I’m sorry if it’s a dumb question, this is the first time I have an SSD. In previous installations (using HDDs) I always had partitions with names like ‘sda1’.

By the way, if I run ‘blkid’ (based on what the terminal says), I get the following information:

Well here it looks good. What could be also a problem is when something else than “AHCI” is enabled, like “RAID” or “IDE”. Please check also if “AHCI” is enabled at your UEFI. Otherwise I have no idea what could be the problem. I would bet it is a firmware or UEFI problem, but not sure.

Dear Megavolt, thank you so much for your replies and help.

I checked the BIOS once again to see if I could find any of the acronyms that you mentioned and I’m afraid that I couldn’t find much. Here’s a picture of the BIOS: 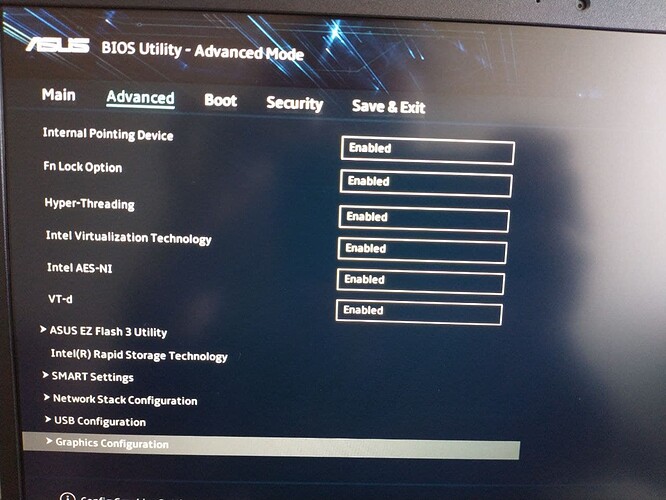 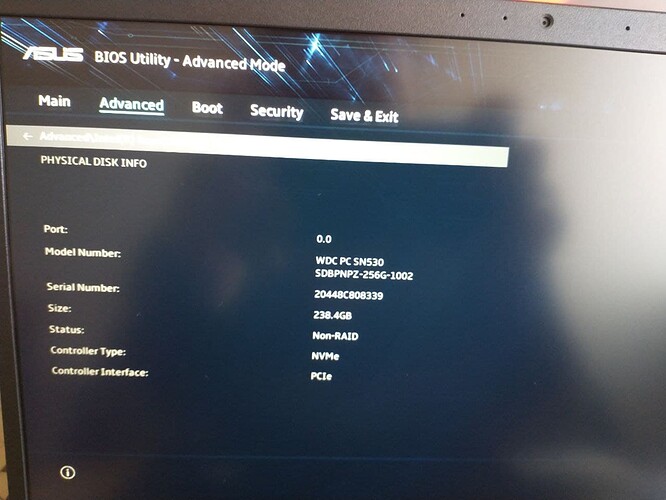 Regarding the other settings, the BIOS suggests that the first two (Internal Pointing Device and FN Lock Option) have to do with the touchpad and the FN keys so I guess they’re irrelevant. Then, when I try to toggle the Hyper-Threading setting it says that it may cause the system to malfunction, so I just left it enabled (which is the default option).

I disabled the other three settings (Intel Virtualisation Technology, Intel AES-NI and VT-d) and restarted the laptop to see if Manjaro would start but I’m afraid that I got the same message (the ERROR device UUID not found thing).

All the other tabs and settings from the BIOS don’t seem to do much about this, but I could enable or disable anything else if you think it’d work.

I really don’t know much about these Intel technologies and BIOS settings, but I believe that maybe I got something wrong on the GRUB settings or how I created the partitions. When I installed Manjaro the first time I chose the default graphical settings (which didn’t work) but then I tried to set the partitions manually so that I could have a swap partition (but it didn’t work either). I tried to follow the Manjaro User Guide but I’m not 100% sure that I got it right.

What I’m trying to say is that I have installed Manjaro several times before (on laptops with traditional HDDs) and never ran into any issues like these. Now I got a new laptop with an SDD (no HDD) and I thought that the default setup would work but maybe I’m doing something wrong (or I missed something).

I think that it’s probably something easy to set up but I just can’t find it yet, hahaha. I have already read other posts online but haven’t found a solution.

Anyways, thanks for trying to help me, you’re giving me hope

I know that Intel RST causes a lot of problems with Linux. No idea what it means with “Non-Raid”… Does it mean by this “AHCI” ? Maybe yes…

There must be a way to disable it or change the mode. I can’t believe that it is not possible… Shame on you, ASUS!

Could you please post the model of your Vivobook?

What caught my attention is the fact that I was able to install Ubuntu (which boots just fine) but I can’t get Manjaro to work. So, I believe that the problem has to do with the software configuration rather than the BIOS setting (I could be wrong, it’s just a hunch).

What comes to my mind is that setting an admin password will unlock more advanced feature at some UEFIs. Maybe try that…

Some systems require the user to set a firmware password before more advanced options becomes available.

Dear @megavolt, I went back to the BIOS and set an admin password but still got no additional options, I’m afraid I still have the same menu entries and I can’t disable Rapid Storage Technology or any of the other terms that are mentioned here. I don’t have Optane memory.

Sorry no idea then. The driver is loaded:

But it needs then a setup with dmraid (fake raid) …

Last thing i could suggest, is wipe the while disk:

If there any OS installed before in “Raid mode”, then the signature still survive even if you create a new partition table.

If that does not work, well, then i am out of ideas, since Asus does not allow you to disable it or change the mode.

I ran those two commands (wipefs and modprobe) on a live session and then created a new partition table and new partitions using GParted (following the Manjaro User Guide). After that, I installed Manjaro once again and the result is the same:

I guess this laptop has some weird BIOS configuration. Maybe it’s something new to prevent us from installing GNU+Linux (they expect us to use Windows and their default settings).

Don’t worry @megavolt, you have already done a lot to help me and I just can’t thank you enough for all your ideas and support, you have been extremely generous and kind. Have a nice day!

I have already read other topics on other forums (like the Arch forum) and it seems that I’m not the only one, so I guess I’ll probably find other things to try. By the way, I tried Endeavour OS too and the same thing happened, so I think that this issue is somehow related to Arch-based distros (I’m not complaining, I’m just pointing out my conclusions).

that I really don’t want to try any other distro. If I find a solution I’ll post it here.

I struggled yesterday with the same problem on a brand new Zenbook ux325. I think it’s an Asus specific problem on their newer 11th gen Intel laptops. After reading around I stumbled upon a theory that they may not be turning off safe boot correctly and it was suggested that I try one of the distros that support safe boot. Following that I effortlessly installed Fedora and am running it right now. I would really love to get back to Manjaro though.

I found this on the arch linux forum and I managed to get it working.
https://bbs.archlinux.org/viewtopic.php?id=264521

Here’s what you need to do AFTER installation:

Here’s some extra info. It seems to be a known issue with arch.
https://bugs.archlinux.org/task/68704

did you disable secure boot?

THIS! This helped me so much, thank you. I just got an ASUS Tufbook, and was scouring around trying to figure out the answer, the MODULES=(vmd) after manjaro-chrooting in was the answer! Thanks so much!

Another solution, disable VMD controller on BIOS if possible.

Dear @Sparereach, thank you so much for your reply. Changing the MODULES thing like you said solved the problem and now I can use Manjaro properly (yay!

In case that someone else has the same issues after a new installation, I recommend following Sparereach’s solution or the steps described in this post.

I’m sorry about the delay, I had some busy weeks at work.

Have a nice day, guys!