There’s been a bug with peripherals (on some mouses) on arm. Usbhid.mousepoll value can be changed.

Perhaps not relevant for your case (xfce?) and/or the issue is no longer applicable in later Manjaro ARM releases but you could check the following post (if not done already):

Also I noticed a bug on xfce desktop on arm, there’s a line that runs across bottom of the screen I can’t seem to figure out how to get rid of. Overlaps all of the windows.

Setting up printers on arm (due to most drivers being for amd64) as IPP if compatible.

Gaming controllers : kernel updated in unstable with modules added xpad. Once its released to stable, there might not be any config required.

I have pushed all new kernels with the it’s latest versions. I only added what modules that were available in the list you posted in one of the kernels for you to test. It will be in the unstable branch when the mirrors sync so switch to the unstable branch and do a “sudo pacman -Syy” every once in a while until these packages shows up in the repo with this version: linux-rpi4-5.4.77-1 linux-rpi4-headers-5.4.77-1 When they do (grab the latest bootloader packages also): sudo pacman -S linux-rp…

Would be nice to see how to correct some of these issues or ways to tweak device to get around them.

Also I noticed a bug on xfce desktop on arm, there’s a line that runs across bottom of the screen I can’t seem to figure out how to get rid of. Overlaps all of the windows.

Which package of mesa do you have installed? mesa or mesa-git.

I’m not sure to be honest. It was a fresh install of xfce desktop manjaro 20.10. It is the default mesa package installed. I began to notice it after changing wallpapers. It could have been there before as well.

That would be mesa. I use xfce and do not have a line and have not seen any one else post about it. Monitor related?

I’ll open a new thread on this. Im running it on my pbpro. I have not run into this issue with other distros.

There’s been a common bug with peripherals (mouse in particular) on arm. Usbhid.mousepoll value can be changed.

I haven’t had this issue at all on any of my devices.

What devices have you tested with, to say it’s a general issue and not just an issue with your device + mouse combo?

Sorry, I have made the correction. Its not a general issue. It is a device related problem that needed to be tweaked.

I think some tips for enabling usage of the power button on the Pi 400 would be useful. I discovered how to get it working in XFCE yesterday: Raspberry Pi 400 Power Button

@cscs, a while ago @Strit posted this. Would probably be a good addition to the Manjaro ARM Wiki.

OK I had to convert your table … and then we decided to separate it.
@Strit’s gitlab wiki is now also moved in along with some of the tips and workarounds.
But the page is getting fleshed out.

Cool. Thanks. What format does it need to be in? I only chose HTML because I was trying to make life easier for you. Also, I made a mistake with the Odtoid boards. The company is “Hard Kernel” & the models are “Odroid C4”, “Odroid N2”, etc.

Do you think the tables could benefit from any extra rows? I was thinking of adding video outputs, storage support, and maybe a few more.

Also, I’m missing a couple of devices from Pine64.

I only chose HTML because I was trying to make life easier for you.

I thought so. Thanks. It wasnt too terrible to convert using a clunky tool for the bulk of it, then some sed to remove malformed lint, and just a bit of hand work - more when it was decided to have them independent.

What format does it need to be in?

Its mediawiki … which is ‘wiki markup’ etc …

Also, I made a mistake with the Odtoid boards. The company is “Hard Kernel” & the models are “Odroid C4”, “Odroid N2”, etc.

Oops … let me look into that.
(EDIT - should be fixed now)

Do you think the tables could benefit from any extra rows?

I am not sure what would be of must interest/use.

Who is ready to take this initiative?
Developers can update it when needed.

Think something like this could be usefull.
But has to be updated by devs when a branch gets kernel updates.

Using kernel versions is not viable, since they change very often. But maybe a list of what kernel packages are available and what they are tuned for, could be useful.

I agree with you, good idea, don’t forget to add a wiki post to edit the user feedback and add some specific trick with the wiki…

The possibility to edit a post to add some user comments, an example… 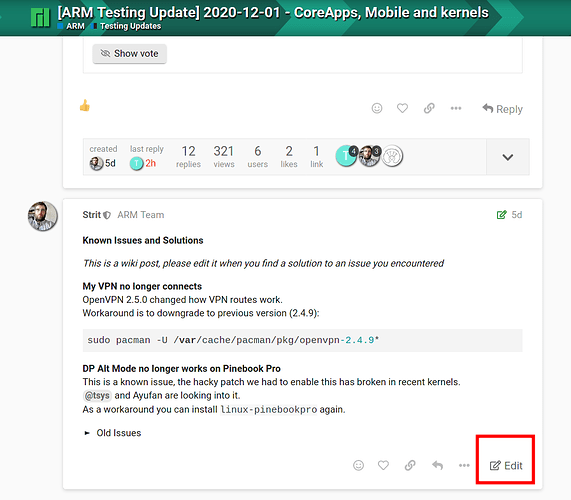 I don’t think that is what is requested here.
I think the OP as talking about the wiki.manjaro.org page, which was lacking a Manjaro ARM section, until recently, thanks to @cscs.

Thanks for your answer,

on my side, I think that the idea is to create a specific Manjaro ARM wiki section…
not bad, OK already present on the top page with some wiki…

Thanks, I discover it today :-)