Wine is broken after the last big GNOME update

Wine has stopped working after the last big gnome update. I’ve tried downgrading the wine version, but it still won’t work. Are the manjaro devs aware of this?

Difficulty: ★☆☆☆☆ Strong of its many members, the Manjaro support forum can provide you help whenever you have an issue with your Manjaro installation. But in order to work efficiently, we shall also ask you to follow a few major points. Provide context Simply signaling an issue is rarely enough to understand how it occurred. It is thus important to provide details on how it happened: Detail prior actions leading to the issue. Provide any related error messages. [HowTo] Find error logs …

It won’t launch any application I’ve installed. When I attempt to launch anything it just says in the gnome shell “Wine Windows Program Loader” for a time and nothing else happens. It’s literally just that. Not sure what else you want me to detail.

Try removing your .wine folder in your home directory. Then open a terminal and type winecfg
Yes, there were some issues with 7.4. Wine 7.5 was released this week and is currently in Unstable branch.

Try removing your .wine folder in your home directory.

Keep in mind this would most likely remove all “installed” windows/wine programs itself unless you specificly used another (wine-)prefix for them in which case removing ~/.wine is a moot point altogether.

I had some wine GUI issues after the last update with themes and fonts. I went into the wine configuration dialog and set Theme to (No Theme). I also installed winetricks to edit the registry to add fontsmoothing. Apps ran though. I’m on XFCE, wine-7.4.

I followed the thread in the previous Announcement.

This is the one I posted. It affected quite a few other programs. It has been resolved via patch and then in 7.5. Wine Bugzilla is the source to check for regressions, etc.

yep, somewhat nuclear approach there. I forget that I only use Wine for very few pieces of software and those are small footprint, standalone types. I have VM for tax software (USA)

Didn’t work. Guess I’ll wait until the devs fix it.

Just an update on the situation:

@livrerego Well, there must be something wrong on your side. winecfg just works: 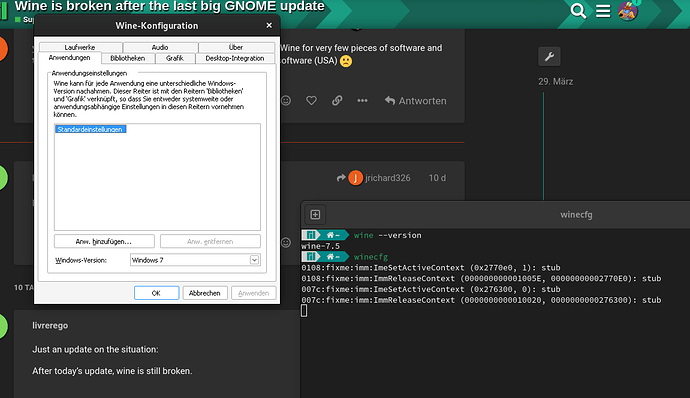 I would say you have to delete the ~/.wine folder and reinstall your applications, but anyway, it would be better to have a wine prefix for each application. bottles is still in development, but is very promising for normal applications. 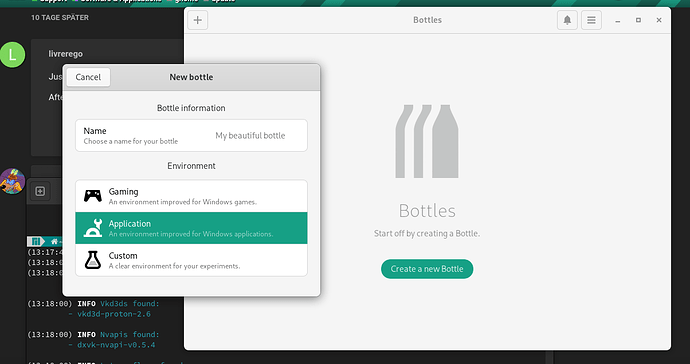 Each one of my applications had their own wine prefix, except for one. I’ve already deleted the /.wine folder and when I type “winecfg” in the terminal nothing happens, it just stays there.

Apparently either mangohud or goverlay were messing up wine. I removed both and now everything seems to be working again.