(x-posted from r/ManjaroLinux, I was told the answers here are better

Hello, I recently built a PC and am having trouble installing an OS onto it. I tried originally booting from a live USB with Ventoy and Manjaro KDE (manjaro-kde-21.1.0-minimal-210817-linux513), but I could never get past the GRUB boot screen. I also tried installing Arch Linux, but it said something like “no EFI boot sectors found” (I don’t remember exactly what it was). My friend who’s helped me with basically every Linux problem found me an older install of Manjaro KDE (manjaro-kde-18.1.2-191028-linux53), which does install, but when I boot to it, installing all the updates is a nightmare. I tried installing the 2000+ updates, and it took probably an hour on the “checking inter-conflicts” step, and there’s no feedback during that step so I have no idea if it’s even working or not. Also, if I try rebooting while this happens, the install is then broken and it fails to boot. I even tried rebooting after not even updating, but just looked at the list and it still failed to boot.

My friend suspects its the graphics card that’s causing the issue, as every other part is brand new except for that (thanks scalpers), and the 1050 TI is a few generations old. What should I do at this point? What makes sense to me is getting the latest version of Manjaro KDE with the Nvidia drivers that are on the old version that I’ve been installing, but of course I don’t know enough about Linux to know that’s 100% the problem.

Assuming you have an nvidia card you should have an onboard card on the mobo right? Maybe plug the video channel on the mobo during the install and later we work on the nvidia stuff. But I do have a manjaro install in a laptop which has a 1050ti so it is definitively doable.

What motherboard do you have? I bell all I it has an onboard card.

it’s an ASRock B550 Phantom Gaming-ITX/ax Mini ITX AM4 Motherboard. I would include a link but the forum wouldn’t let me post it.

Take a look here: Problems booting after some changes - #16 by lkovacs

Plug on the mobo HDMI, se if it boots and you can install without the nvidia drivers, then you will have manjaro running and we tackle the nvidia setup.

That’s the thing, the mobo HDMI does absolutely nothing. No picture at all

Does this mobo bios allow you to select or disable the onboard graphics card?

I have a GTX 1050 Ti. No problems at all. Neither Open Source nouveau nor Proprietary nvidia. Both work. However… on the ISOs 10xx cards should work out of the box with nouveau if OpenSource or free is selected.

I bell all I it has an onboard card.

Does this mobo bios allow you to select or disable the onboard graphics card?

And OP is most likely using a CPU with no iGPU.

Exactly, my friend who picked out the parts for me even told me there’s no onboard card.

I think most consumer MOBOs these days do not have onboard graphics.

Indeed ! If the CPU does not have a GPU option the onboard HDMI will probably not work. (It took me a few minutes to figure that out, I have a B540 and ryzen 5 3600 (no internal gpu unit))

I tried booting the live USB with Manjaro KDE with both the open source and proprietary drivers, both showed a black screen after choosing

an older install of Manjaro KDE (manjaro-kde-18.1.2-191028-linux53), which does install, but when I boot to it, installing all the updates is a nightmare. I tried installing the 2000+ updates, and it took probably an hour on the “checking inter-conflicts” step, and there’s no feedback during that step so I have no idea if it’s even working or not.

Highly not recommended to install via an old installer, as configs have changed a lot.

I would recommend you to try using manjaro-architect… but the Manjaro team no longer releases the manjaro-architect ISO unfortunately, which makes me sad because that’s the ISO I mainly use. But it’s probably because it’s unmaintained now. It does get some updates though.

You could technically use it on the Live ISO… but you’d have to update that whole Live ISO to get the newest manjaro-architect because just updating manjaro-architect might break it due to partial upgrade and I don’t think that’ll work that well.

Edit: Oh also, the older ISO might be working because it contains the correct driver for your GPU, and the newer doesn’t by default. It’s a possibility. I wouldn’t know how to fix the issue though… I stick with AMD because it’s built into the kernel.

OK… maybe try this at least:

Now the ISO should boot to the basic login prompt. Login there with:

Now you can try to start:

to skip the login screen.

At /var/log/Xorg.0.log you will get more information:

OK… maybe try this at least:

Now the ISO should boot to the basic login prompt.

I put this in the “setparams” list inside the single quotes, but it didn’t boot. Is that where it’s supposed to go?

EDIT: Also worth noting is that when it goes to the black screen, my keyboard backlighting also turns off; wonder if this means anything.

It must be set after

Or after quiet on this picture: 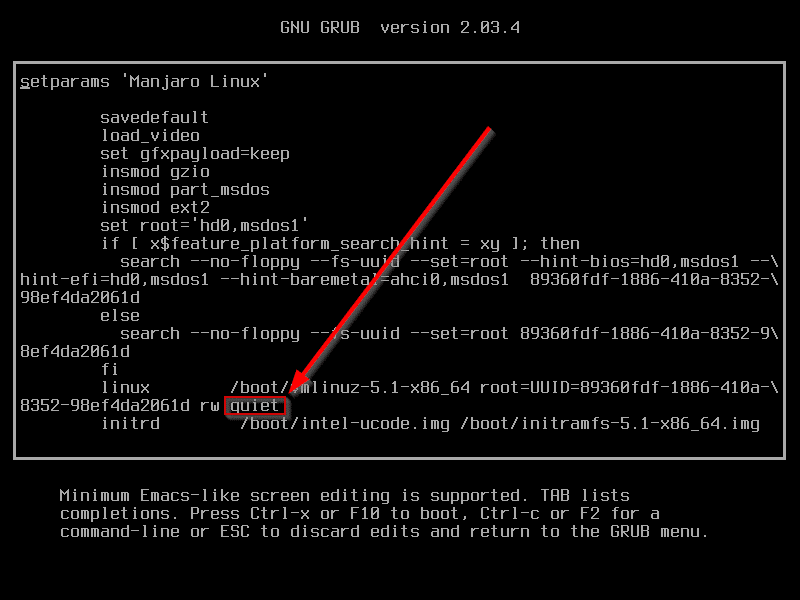