Too many useless fonts. Hide or delete fonts that are not for specific languages

In font lists of applications, I see tens of Noto series fonts of weird languages. They are so many that it makes it very difficult to find a real font that I want. Is there some way to hide fonts of languages from the list that are not in system language list? I only need fonts for Western European, Japanese, and Korean. Or, can I delete all fonts other than Western European, Japanese, and Korean, all at once? 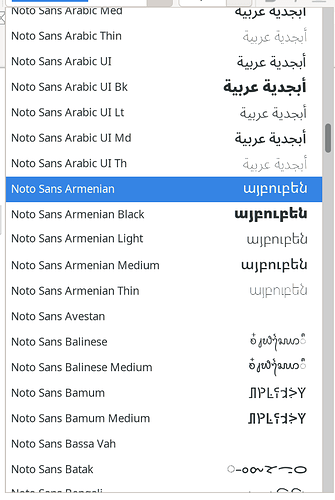 Locate the packages in Add Remove Software and uninstall them

Most of those are all included in the noto-fonts package. Not uninstallable if they’re using KDE/Plasma (or several other software).

They are “required” for some reason. If you delete them they’ll be back with the next system update. Best thing to do is hide them. See the process here. It’s not a Manjaro forum but the process is the same.
Tip: Managing fonts - General system - EndeavourOS

for not install all (if in same package) we can use NoExtract in pacman.conf

Thanks, but that method is using font names. I need some of the Noto fonts for Japanese and Korean, so I cannot just “reject” Noto-*. It is better than nothing, because I could add all the font names I do not want to see individually into the list (although time-consuming), but why didn’t the Linux OS/Gnome developers foresee this problem when internationalisation became popular? In my opinion, it would not be very difficult to implement font filters by their language types (since LibreOffice already shows what language type the font belongs to) in the OS’s font chooser dialogue box. I am not the only one who have to deal with a huge list of mostly useless fonts when choosing a font in applications, right?

In that case, open the Font Management program and disable the ones you don’t want to see. After updates, though, you may have to do it again.

I installed and was testing the “Widget Factory” app which is for GTK4 demo. There was a font chooser, and it has “filter” feature: 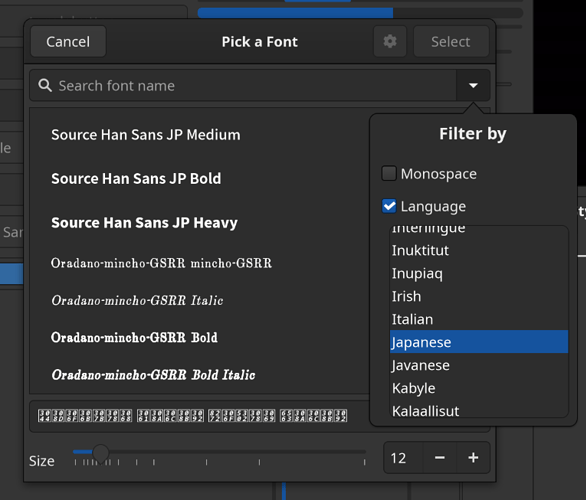 This is different from current font chooser (which is probably GTK3): 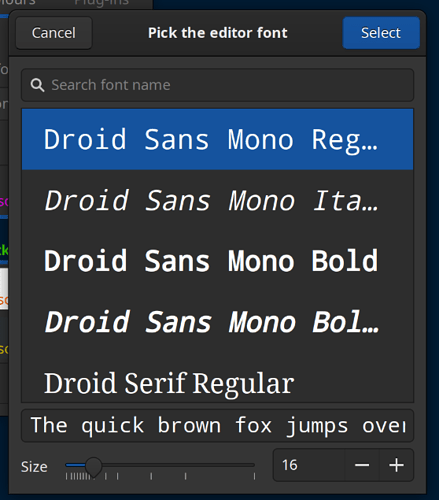 So, at least the situation will improve in the future, although that current implementation of GTK4 is not that great, just “better than nothing”, in my opinion, because it has no search feature (I have to manually scroll that tiny unresizable and long list and find the language) or selecting multiple languages.