Hello all,
After a lot of struggle, I finally had perfectly working Nvidia laptop, with performance equal or sometimes even better than Windows. Then the system update came, which replaced my 495 nvidia driver to the 510 version. And the performance dropped a lot. Now it is again as slow as before my struggles. (Nvidia produces now half of the FPS compared to Intel integrated GPU).

Fortunately I had Timeshift backup of my system from just before the update, so I rolled back, and to my surprise, this did not fix the problem!

How is this possible? Did the driver update process modify some GPU firmware?
I have done precise measurements before and after, and the difference is huge. All conditions were the same, even air temperature.
After booting to Windows, the Nvidia is working ok as always, so the hardware didn’t break.

I had properly installed optimus-manager, and all testing was done using Hybrid mode with following commands:

Did you try with another kernel ?

Difficulty: ★☆☆☆☆ Strong of its many members, the Manjaro support forum can provide you help whenever you have an issue with your Manjaro installation. But in order to work efficiently, we shall also ask you to follow three major steps. Keep calm and read First some basics: whenever you need to troubleshoot, chances are the solution is already under your nose. Find error messages Very often when an applications crashes, and sometimes when it misbehaves, it prints an error message somewhere. …

Are you sure you didn’t do something before taking your snapshot and updating the system? What you describe is very unlikely if you indeed brought you system back to where it was you should have same performance, beside the usual need for shaders to be recompile for your Steam games.

Did the driver update process modify some GPU firmware?

What about not using this external software? Manjaro Prime setup is working as is.

Yes, I rolled back the whole system (only without home and root directories).
So, if something was changed, it probably was in home, that Timeshift excluded from backup.

Did you try with another kernel ?

Before my success with the driver I have tested many versions of kernel and driver pairs. It was always properly loading the driver (glinfo, and vulkaninfo confirmed that), but the good performance was only on the following version: linux515-nvidia (in version 495.46-10), which did fit to kernel version 5.15.16-1-MANJARO. So I kept this configuration.
All other versions did not provide good performance.

Are you sure you didn’t do something before taking your snapshot and updating the system?

What about not using this external software? Manjaro Prime setup is working as is.

Belive me, I have tested this, and a lot of other stuff, even on different Linux distros (PopOS, Ubuntu). It was strange for me, but it only worked with Manjaro + optimus-manager. This setup survived 2 months on Manjaro, and now it is broken.

Perhaps there is some error, which is random in its behavior, and it is just coincidence that it happened just now.

If you are using OM in ‘hybrid’ mode … there is absolutely no reason to be using it at all.

It creates issues … I cant force you to use certain software on your own system.
But … this is well documented and addressed over many other threads.

Not to mention that, besides its own hacky construction, it is also an AUR package … so both things require extra attention.
optimus-manager even has special steps in its github for manually augmenting the display manager so that OM will work.
And, as an AUR package … you are responsible for rebuilding it when needed.

What I would suggest as you can’t avoid updating the system anyway, is to update Manjaro, remove Optimus Manager, and start from there.

Yes, I rolled back the whole system (only without home and root directories).
So, if something was changed, it probably was in home, that Timeshift excluded from backup.

So if you did a rollback including /boot and kernel and /usr …
and your system does not behave like before,

Then your snapshot was

This is why i do automatic snapshots every hour/day/week with snapper. So if i have to rollback i have 20-30 snapshots to select the right one.

What I would suggest as you can’t avoid updating the system anyway, is to update Manjaro, remove Optimus Manager, and start from there.

Done, I have updated the system, removed the optimus-manager, and all nvidia related stuff, then followed the official Manjaro Wiki guide to install the driver.
…And no surprise there. The driver is loading and working, but the performance is terrible. It is twice as bad as the integrated Intel GPU.

Any ideas, what could be slowing it down? Where to look for the cause?
What stuff should I check?

Check if using prime-run use the Nvidia card.

Also as requested earlier in thread give proper system information.

As you can see, nvidia driver is loaded correctly:

…as well as intel (without prime-run):

Confirmation, that drivers are installed:

Indeed it seems it is all in order, beside your BIOS which is not on latest version.

Try to see if the Nvidia card is not locked in a low power state with nvidia-smi I already have seen that in dual boot situation.

The GPU performance state APIs are used to get and set various performance levels on a per-GPU basis. P-States are GPU active/executing performance capability and power consumption states.

I think, I found something (thanks to @omano)
When the GPU is not in use, it goes into low performance level as expected (GPU clock goes at 34MHz): 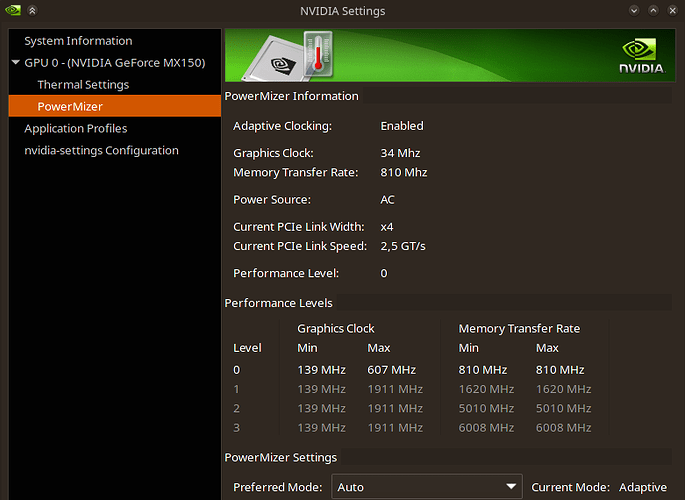 …but when the GPU is under heavy workload (rendering complex shaders where I get maximum of 10 FPS, for example some from: www.shadertoy.com) it’s clock does not reach the maximum speed. It just goes up to 433MHz never exceeding this value. But the Memory transfer rate is at it’s maximum: 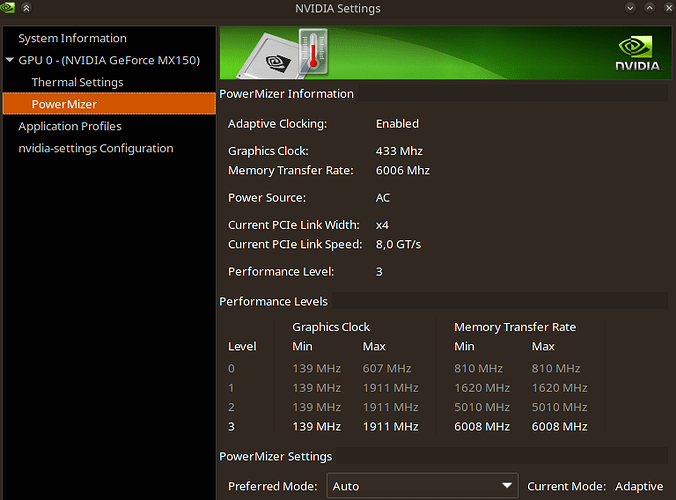 Result of nvidia-smi and prime-run nvidia-smi (both were exactly the same):
When idle:

I have tested this also with vkmark, glmark2, and some Steam benchmarking demo “game”, the result is always the same.

Does this indicate, that maybe the system is performing inefficient method of copying framebuffers from Nvidia GPU into the RAM or something?

(Laptop screens are usually connected into the integrated GPUs.)

It seems like it goes to the performance power state P0 when in use so not the issue I was thinking about (locked in P8 state all the time). But indeed if it never reaches near the max clock there may be some issues. No idea for now.