Random trash files appearing in /home directory, why and how to delete effectively? 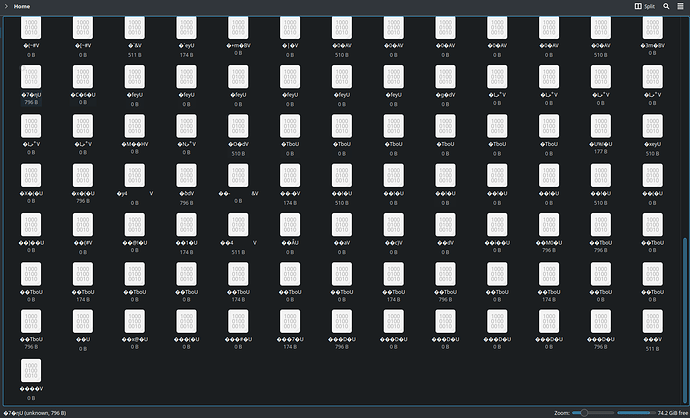 I’m having this for over a month and I think files like these just keep adding up.
I don’t know what they are, I just know that I surely didn’t create them and there is more than a hundred.
I can’t delete through Dolphin cause it’s saying “file doesnt exist” and with console names are still messed up and there is, like a said, too many of them to delete them 1 by 1.

Does someone know why it’s happening and how to delete all this garbage? Thanks.

Considering the place, i’d say either a process run by root is responsible, or it is a side effect of file system corruption.

Does /home have its own partition?

No, my /home is on the same partition.

Considering the place, i’d say either a process run by root is responsible, or it is a side effect of file system corruption.

The latter, most definitely.

So what do I do now, reinstall?

If you use the base mkinitcpio hook, you can force fsck at boot time by passing fsck.mode=force as a kernel parameter. This will check every file system you have on the machine.

At the GRUB boot screen, press E and add fsck.mode=force to the boot line. Then press F10 to boot.

I don’t really have GRUB boot screen. Laptop logo and OS right after. If I’ll press E continuosly it’ll get it entered, but that thing will dissapear soon after into my login screen.
Can it be set with grub boot parameters or something?

Can it be set with grub boot parameters

Edit in terminal:
sudo nano /etc/default/grub
and change the third line to: GRUB_TIMEOUT_STYLE=menu
(instead of hidden)
save (ctrl o) and next command: sudo update-grub
then reboot - grub-menu should be visible then.

Nothing happened. At least visually.

Like:
F1 or ESC or …
I just don’t know off the top of my head what will surely show you the now hidden menu
… try different keys from the top row …

you never reported back the result of:

You can easily force check your filesystem (if it is not BTRFS) using literally any Linux live ISO.

I got to the grub to add the parametr - didn’t work.
Output of the command:

And yeah, as you can see it’s btrfs.

In that case - I’m immediately out.
Because I cannot give advise on something I have never ever used and of which I do know very little about.

But now finally having that information, knowledgeable people here can help you further.

Is BTRFS so bad and different in terms of maintanance/problem fixing or?

And I have zero experience with it - so:
I rather defer you to the people who actually KNOW about it
before I try to render useless or even detrimental advice.

I simply cannot give advise based upon having worked with it, based upon experience.
Because I have no experience, I have never used it.

BTRFS is good - but it has got some peculiarities.
One of them is: you cannot simply fsck it.
The procedure is different - and I don’t know it.

ps:
the directory these files are in is
/home

it’s good that you spotted them -
but why did you even look there?

It’s not something an “ordinary” user would even notice …

actually I just checked… Don’t know how I didn’t notice. It’s in the /home/user. Dolphin just calls it Home

If you insist …
but it really does not change anything anyway, fundamentally

the contents and headline of your screen shot
featured in your initial comment
actually runs counter to that
it says something different
it says what you initially said.

but it is a screen shot …

or - based upon all the info so far

there is info on that - here and on the wider internet

it is user folder. I just got stupid on the start.
For what I know /home doesn’t have random crap like Downloads folder 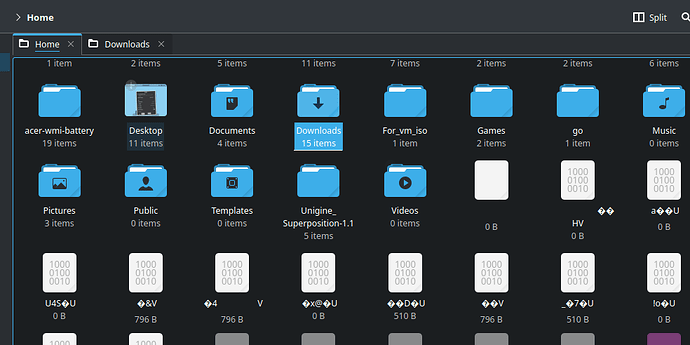 If you insist …
but it really does not change anything anyway, fundamentally

@ Nachlese per both @ cheerfulnag’s screen shots, yes /home/[username] is always displayed in Dolphin as Home.

Hence @ cheerfulnag’s confusion, and subsequently yours.

That is truly confusing indeed - certainly to me.
Thank you for that clarification.

Nor do I, unfortunately.