Nvidia-settings has almost no options - raytracing disabled too

I recently made the switch to Manjaro Linux, so considering myself an absolute noob but I simply had enough of Windows 11 and thanks to GamingOnLinux on YouTube found out that thanks to Proton I can game here too. So here I am.

Installing and maintaining Manjaro on my Desktop was no problem at all. However I encountered issues on my gaming laptop which is a Lenovo Legion 5 with an RTX 3070 graphics card.

The problem was, that the nvidia-settings had only sparse options available compared to my desktop. Basically, I cannot change anything. I wanted to enable GSYNC (which this monitor has and is available in the Windows 11 basic installation also on this laptop) but there is no option. It looks simply empty.
So before posting here, I tried to resolve the problem myself as I consider this a great learning experience to get into touch with Linux.

Screenshot of my sparse nvidia-settings attached (Edit: was not possible to upload).

Step 1: nvidia-intel-hybrid-prime driver
This was pre-installed by Manjaro and I assumed that this driver was the issue as (from what I learned) this prime-thing utilizes the internal graphic card when I am on the Desktop for example and then switches to the NVidia once demanding process comes.

Step 2: Removed the hybrid driver via the GUI in Manjaor and installed video-nvidia
Big mistake - my system was stuck in boot and nothing happened anymore. So I did my research how I can rescue my system via a LiveUSB stick and chroot.

Step 4: Checked nvidia-settings again as normal user and root
To my suprise - I had the same sparse options again :-|. Nothing had changed at all, this was quite frustrating. So I did another research and came across this thread as the user had the same issue and by chance, I too had no xorg.conf file in my X11 folder. Unfortunately I am not allowed to link the thread here as the forum doesn’t allow me to post links and upload screenshots. So I cannot show the settings dialogue nor the forum thread (it was in this forums thread 99277).

Step 5: Created new xorg.conf file
Worked without issue per the link above. I did a reboot and once again (unlike the user in that thread) my settings still are the same without any possibility to change a thing.

Step 6: Testing a game
I therefore tried Resident Evil Village. The Laptop spooled up indicating all is fine. Graphics were wonderful and it was definitely not utilizing the internal graphics card. It showed 8GB RAM which was the RTX3070 card. However, the Raytracing options are all greyed-out - so I assume, my graphic card is not correctly recognized.

Now I’m here. No ideas what I can do, every thread I read I try with the same result.
Does anyone of you have at least an idea why the detailed options in nvidia-settings are missing (GSYNC activation) and why the games do not recognize the graphic card which would enable Raytracing. As said on my Desktop computer no problem at all.

Looking forward to any advice.
Thanks in advance,
Ben

hello,
have you checked this (maybe you have to run with sudo) 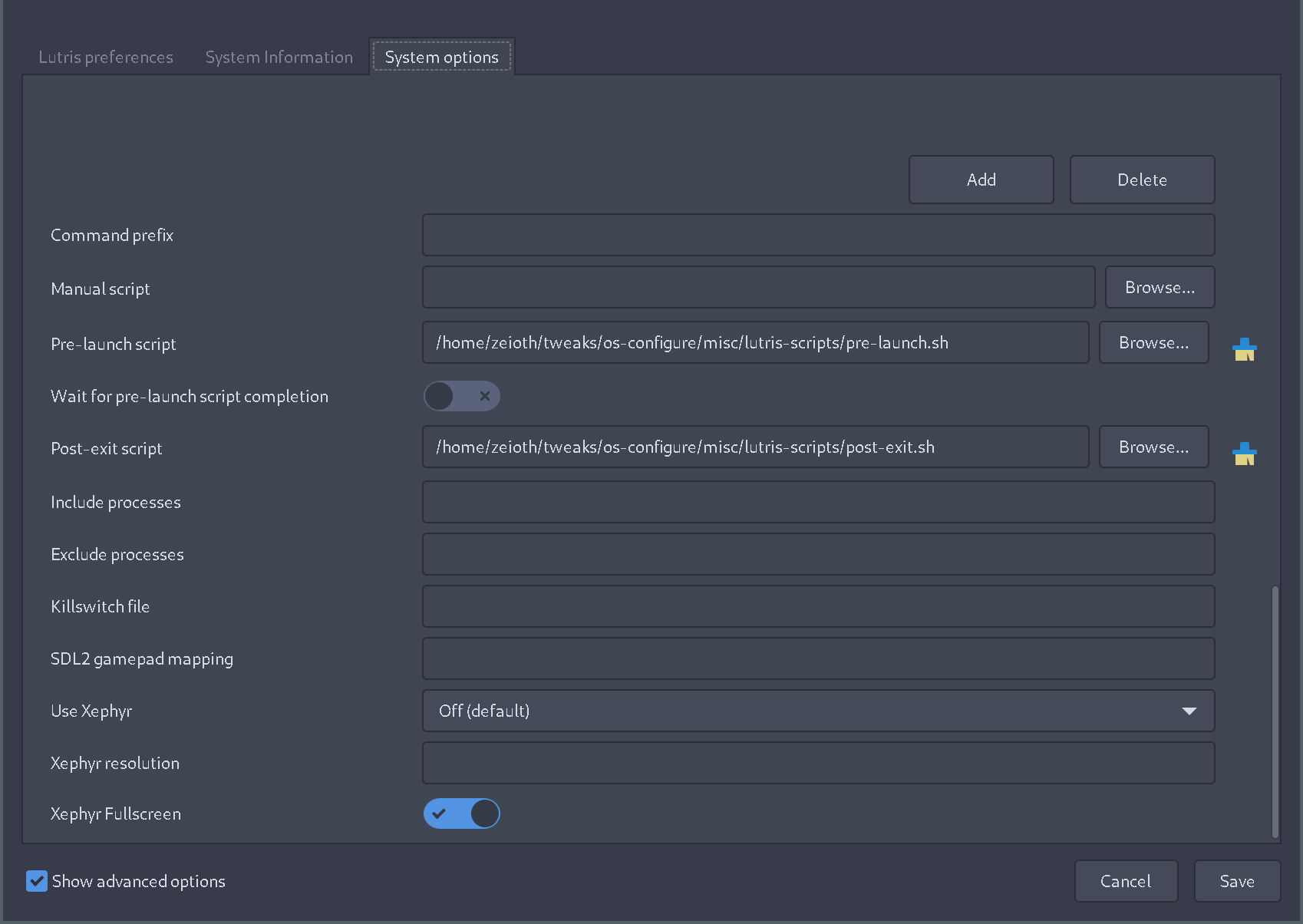 my apologies, forgot to attach the inxi (at the bottom of this thread).

I wish I could post a screenshot but the forum shows a red warning, I have no ‘X Server Display Configuration Settings’ in the nvidia-settings.
All I have from top to bottom is: 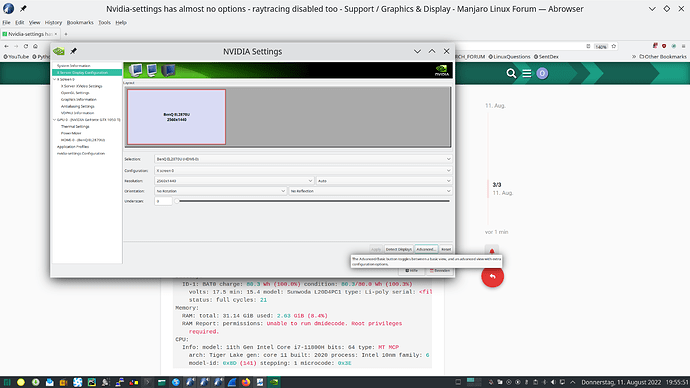 there is no such button as I don’t have these ‘X Server Display Configuration’ settings as you have on your screenshots. I only have the 3 main options listed in the thread before.

That is what the output shows…

and that’s what i was concerned, you are still in intel mode.
please post the output of

Oh that’s interesting. Somehow I feared that but as a youngling in linux the learning curve is quite steep, so thank you for the guidance and insight how to troubleshoot. The outputs are:

you have to enable the aur-packages before you can find them.

OK will do and provide the outcome. Would you suggest switching back to the initial primus-hybrid driver which I removed in favor of video-nvidia? Or doesn’t it matter?

no, use optimus, in this way nvidia is always the primary and active gpu

Writing from my mobile. Installed both software and did a reboot. Now the screen is black and that’s it. Nothing happens anymore (does not boot).

that should not happen, did you change any settings or just simply installed ? please go to a TTY-console (STRG-ALT-F5) and check if you can login. then we have to fix it

and wouldnt it be better since he is on laptop to use the prime hybrid drivers, because of battery?

Thank you both.
I was able to login via TTY and used nano to modify the file sddm.conf.
I also removed the Nvidia driver via mhwd and reinstalled on the shell via mhwd the hybrid driver I initially had. Did a reboot and everything stays dark. Strange.

I just did install Optimus-manager and the qt version and did a reboot nothing else.