I have installed manjaro a few weeks ago on a new partition. It worked very well at the beggining but after a day weeks it started getting very slow, and I couldnt play any games after - the CPU was at high capacity, it was very slow/ low FPS on a (reasonably heavy) browser game, and the temperature was high (reaching 100degrees celsius by the monitor).

THis is an old laptop but it used to run very well. 6GB ram, good intel graphics. It is an intel i5 which used to run perfectly well some games [i used to use elementary os].
After i installed manjaro, it gets 1) very hot (temperature reaching 100c when running a heavy browser game), 2) very slow, and 3)CPU at high capacity.

I have read so much about all kinds of possible solutions dealing with cooling fans on my laptop (supposedly thats the issue? [specially because heat+i cant hear the cooling fan work]), but absolutely nothing works.
I have tried changing kernels (installing it, on boot screen changing the one Im going to use, etc.), didnt work.
I have tried TLP, POWERTOP, LMSENSORS, PWMCPONFIG, everything.

At PWMCONFIG, i reach a point where it says: “/usr/sbin/pwmconfig: There are no pwm-capable sensor modules installed”. I have tried a possible solution (" fancontrol-under-ubuntu-14-04-resolving-usrsbinpwmconfig-there-are-no-pwm-capable-sensor-modules-installed "), didnt work to.

MY elementary os (in the another partition) got slow as well after this issue arrived.
I have tried to fix it in elementary os, but got nothing new too.

Is it due to manjaro not ‘‘geting my cooler to work’’?
COuld it be a coincidental hardware issue? (for instance, laptop fan suddenly not working…?)

PS: I cant see if it works, I dont know how to open a laptop and I think this is not a likely scenario.
PS: right now, after i tried to configure TLP, it runs at around 50-66 with daily use (browser, notepad, etc.). I think it solved a little bit of the heat issue (it was higher on average), but i just dont see this as a solution. It feels like im just trying to make my laptop slow down, when I think there’s an issue and I want to try to solve this issue.
I cannot play anymore in this laptop, and If i try to run a game, it gets to 80-100 degrees.

When asking questions in the forum it is most helpful to everyone for you to provide some basic information. When sharing information to either give or receive assistance, please be aware of the following: 1 ) In almost every situation not explicitly involving appearance, Text is preferred over Images. 2 ) When providing code or text output, please format it so the content is easy to read. How to Format “Code” in the Forum Its easy to make your text and code easy on the eyes Firs…

Thank you! Which part of it would you like me to transcribe in detail? I didnt want to make this text too long, so I summed it up the essentials.

Between 8 and 6 years old and:

I dont know how to open a laptop and I think this is not a likely scenario.

Start at the basics first:

THank you for your detailed answer Fabby.
It is an old laptop, yea. I actually have just started using this one (with elementary os) after my family discarded it, but it was running perfectly fine.
I will post the results of your instructions now. BUt just FYI, i think there is a similar issue disccused in an arch linux topic called ‘’ [[SOLVED] Fan not working in Linux]’’, but his fan just randomly started working.

1.I feel a bit hesitant in regards to the compressed air/vacuum machine alternatives (i have neither at home, too), if I cannot make this laptop work out as before I might ask help for a computer technician.
2.I have tried looking into BIOS settings - I’ve heard there is an ‘‘update’’ option somewhere that could be helpful -, but there was no option available for me to either change fan settings or update it…

Now to your instructions:

PS:
2 things came up temporally that preceded all this issue:

Thank you again for your effort and patience

I do have to add: the same issue is happening on the other distribution, elementary os.
DO you think the most likely scenario is a hardware issue?

Could be.
I remember an old Dell that after it got some years on it just started to heat like no other.
To the point where it would stutter and lock.
Now I cant remember if it was anything particular like the nvidia card … that machine had met its end of life.

In your case, I do suggest a clean up like @Fabby mentioned above. Especially if its old and never had that kind of treatment, you might be surprised to find anything from a ton of dog hair to an ant colony in there 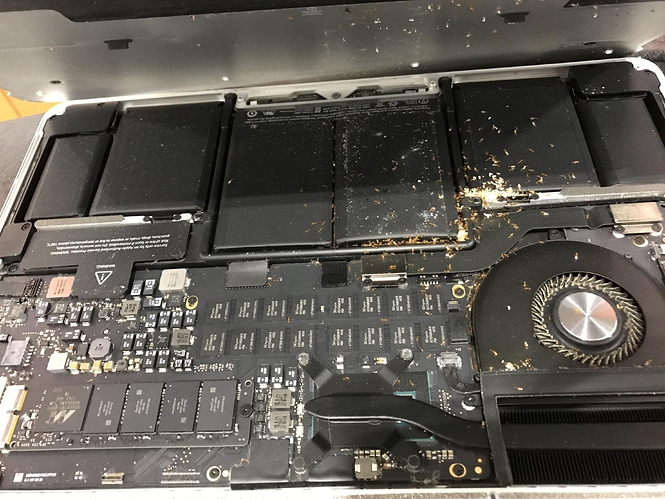 But of course there are more software avenues too, like TLP, thermald, and/or some of these power savings help with heat too:

DO you think the most likely scenario is a hardware issue?

Doesn’t show anything from a software side.

But if you do, this is a quick and easy solution: (ok to be clear … jokes is jokes

Chiming in to say that while I did not have much dust inside of the laptop, my heatsink was clogged to the brim in dust and I ended up replacing the fan because not only had I broke it, it too ws also caked with dust. So yeah, open your laptop if you can, give the components a good clean with rubbing alcohol and be very careful through the whole process.

My laptop which was clearly not meant to be user-serviceable with its multitude of screws and tabs is still kicking along as good as it had, and better after a gentle cleaning to get the bulk of the dust off. Pro tip for laptop research: See how easy it is to disassemble before you buy.

Serviceability and maintenance should be primary factors in your purchases, not secondary!

Try servicing a Microsoft Surface Pro: You need to use an iron to iron clothes with on its hottest setting to melt the glue it’s been stuck together with!

I also suffered from random freezing because of the new implemented I/O schedulers in new kernels which boost performance for new laptops with SSD. So try to use kernel 4.14 which has good I/O schedulers for old laptops.

That shouldn’t be a problem for future kernels, though if it is you should consider building your own. I don’t have an SSD and I am on 5.8.11-1.

I kinda doubt the IO schedulers were the thing … many work fine with either hardware … and I think most versions implement a dynamic udev rule like this:

(so you get different schedulers for different devices)

But of course … also … you could always just change your scheduler instead of kernel.
I am not sure changing kernel alone would even do the same for you automagically … unless its such an old kernel that a modern scheduler is inoperable and thus it falls-back to some old default.
(which would also not be the way you want to do that)

I already posted a question here on old forum (I couldn’t found it), the problem is that the new kernels dropped a type of scheduler that was supported before 4.14 and there is no way to select it with new kernels, so changing to 4.14 resolved my problem with my old laptop with HDD.

Guys, everyone, thank you for your effort to help me with this issue. I will definitely contact a technician to help me with the process.
I wont have this topic as ‘solved’ so that in a few weeks I can share any updates on that

Hey medmedin, I did read about that, but i changed the kernel several times and it hasnt changed a thing. That feels like a weird options specially because it wwas working before no problem.
BUT, in any case, were I to change my kernel… I have just opened the manjaro tab, but the earliest kernel I can change is the 4.4 version… what do I do ?

I’m on another computer but kernel 4.14 is still available on Manjaro settings 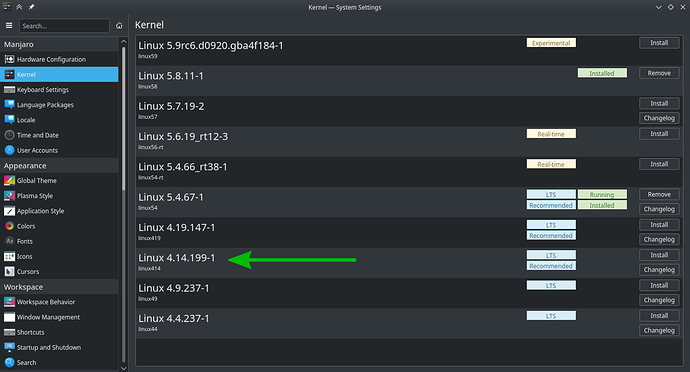