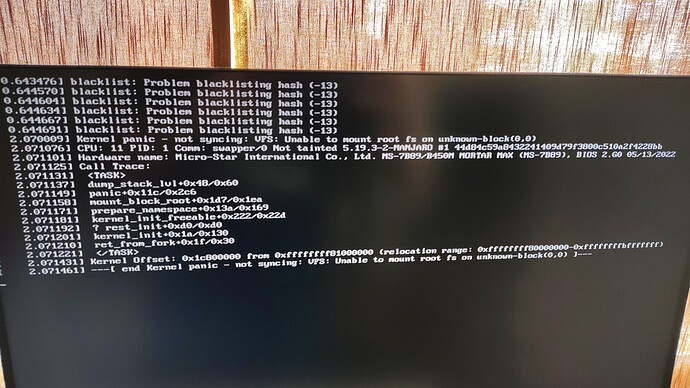 Even after forced downgrade by package system from 322 to 261 my laptop got bootlooped to bios. Your instruction helped to restore.

Guess I spoke to soon seems latest update and reboot went to bios.

To everyone who brings up making backups which I’m bad about not doing thanks for bringing that up.I rebooted into the latest Manjaro live usb restored the backup with timeshift from yesterday rebooted and reinstalled grub which downgraded to 261 then ran updates rebooted and all’s well.Again thanks for stressing about making backups.

Thanks to @dalto for writing up an EndeavourOS blog post with more info about the issue:

Full transparency on the Grub issue

Written by Dalto Full transparency on the GRUB issue Since the recent grub issue has impacted a lot of people, we wanted to provide full transparency based on the information we have so far. The si…

there is not enough full testing from git savannah Grub , there are many commits since release 2.06

Well we should slow down in blindly adopting grub updates when Arch does it. In the end it is grub-git what Arch is pushing out to their users without much testing. Also most already adopted systemd-boot or other bootloaders so grub is in general not great tested with Arch. At least we should check the commits for breaking changes.

Starting with this commit, grub introduced a call to fwsetup --is-supported in /etc/grub.d/30_uefi-firmware. If the version of grub you have installed via the grub-install command didn’t support that command, it caused grub to fail.

In other words, BIOS installs seem to work as the change was done for UEFI ones only.

Why does it happen?

When you update the grub package you won’t update our installed grub bootloader on master boot record on your system. So when you installed Manjaro years ago that version of grub doesn’t support the cmds the updated scripts might try to execute. Only when a newer version of grub got installed via grub-install those cmds get supported. A smarter move whould have been to check if the actual installed grub supports newer cmds scripts may blindly execute.

Grub itself is mostly installed once and forgotten. Only if there are really security risks it is recommended to reinstall grub also to your Master Boot Record (MBR).

Luckily there is an unstable branch which shielded the issue for 95% of users.
Maybe it’s better not to include always the latest and greatest version for such a vital piece of the chain.

Has the manjaro team ever considered adopting systemd-boot as default instead of grub? Feature-wise they are about the same, innit?

If you need a bootloader for BIOS systems that follows The Boot Loader Specification, then systemd-boot can be pressed into service on BIOS systems. The Clover boot loader supports booting from BIOS systems and provides a simulated EFI environment.

I wondered that because last time I checked archiso archinstall script defaults to N for using grub. Don’t know if it’s changed, tho.

Come from this error:

I tried what you says, but no luck:

Thanks all for the explanations, but could you tell me what are the next steps for the next stable releases ?

What are the recommandations ?

Will there be a workaround ?
How to know if i am impacted with this issue in my system?

Currently all branches are using r261.
It will be updated once a working solution is found.

If no solution is found its not that difficult. From what I’ve read you just need to install /update grub after the update before you reboot.

Interesting thing is that I started this thread about issues I got, even though I did install and update GRUB after the package updated. I didn’t get the seemingly usual symptom of booting into UEFI, I got a good ol’ kernel panic.