After updating to grub 2.06.r322.gd9b4638c5-1 and running grub-install and update-grub, the GRUB menu has “Out of memory” warnings for me. It does ask me to press any key, which opens the menu, but it’s all in ASCII style, and seems to still work. So just the GRUB theme broke? 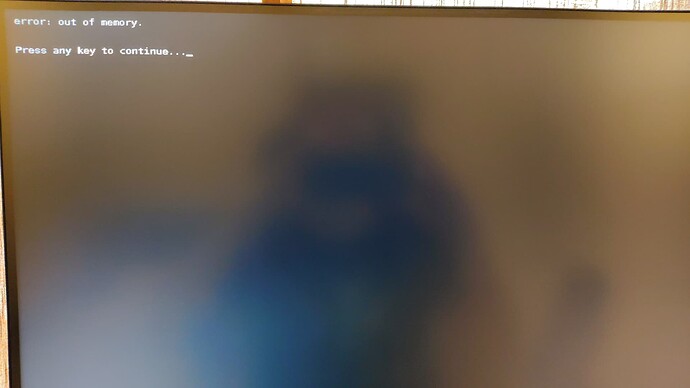 I also did not run any commands after updating as there were no changes to usr/lib/modules/*/vmlinuz, boot/vmlinuz* or configuration files.

I have the same line.
I’ve run the install steps again, same results.
But it doesn’t seem to hinder actual functionality, and wouldn’t even notice it in my normal (GRUB_TIMEOUT_STYLE=hidden) boot. Errors only appear if I enter the menu.

I have used the menu between the last and current GRUB update, so something somewhere caused this to happen. A bug? I mean we just had one with another revision you had to revert.

Errors only appear if I enter the menu.

I’m using hidden for GRUB_TIMEOUT_STYLE on my old laptop and menu on my current laptop. No errors and the menu works as expected.

A bug? I mean we just had one with another revision you had to revert.

Are you using a different file system besides ext4 or using encryption?

After installing this I couldn’t boot anymore, always went straight to bios.

So I did the usual chroot → grub dance and that fixed it. Still, quiet unpleasant.

We have patches related to being quiet.

Same here, with update of grub package it boots directly into Bios for me. To bring it back was to chroot and then downgrade to r261. Btrfs, unencrypted.
I can’t tell what is wrong with it, no significant errors, but something is wrong. The affected grub package has been reverted in repository.

The affected grub package has been reverted in repository.

As I just explained…

Same here means my machine boots into Bios after I updated grub package.
The boot into Bios happened with r322. The update was done ~3 hours ago.

Downside now is after going back I don’t have Grub selection anymore with my dual boot. I’ll fix that later. os-prober does detect my second boot option.

We have patches related to being quiet .

This is the dance I always end up doing, when I loose my bootloader somehow Restore the GRUB Bootloader on Manjaro Linux. Usefull when your fresh windows install eats your grub and can not boot into your linux installation, or for some how your grub is missing · GitHub

My post was more of the info for other users spirit, not this needs to be fixed (one user is a too small sample size, but I appreciate the thought)

I also remember seeing something in the update log regarding grub, can’t remember the exact wording but here are some bullet points:

After this update my box acted same, so itwas going into directly bios instead of opening grub
Even when i tried to live manjaro usb stick and selecting find EFI partions menu couldnt solve
this { when i selected related efi image it was still going into bios/uefi }
I have fixed it with running a manjaro live systen , then run a console terminal and used
sudo manjaro-chroot -a
grub-install /dev/sda
update-grub
exit
and reboot

This is kind’a strange.

I was wondering the same because i did the update on two installs (same machine tho) and both work as before with the 2.06.r322.gd9b4638c5-1

@linux-aarhus Did it happen on second boot after install?

I think I remember that I was able to systemctl reboot after the upgrade (didn’t pay much attention to it) but a second reboot stalled the system in Bios.