I want Gnome 40! Why doesn't Manjaro ship Gnome 40 Shell yet?

Most of the issues we have with Extensions are with Wayland. Even using Gnome Initial Setup creates issues with Dash-to-Dock not displaying correctly. So from my perspective:

The effort we put into this desktop environment is not in relation to the outcome.

Application icons are not shown, only the app drawer icon

The issue happens on wayland, gnome40, Manjaro unstable. What is curious is that… it happens only for the first user installed in the installed system, but it happens invariably to that user. Triggers the bug: - user created via calamares installer - user created via calamares installer after the installation - user created via gnome-initial-setup Does not trigger the bug: - user created after installation with useradd command (same shell commands that calamares uses to create a user) - user created after installation with gnome-control-center Disabling and re-enabling the extension does not help. Removing and reinstalling the extension does not help. Copying the working users dconf file to the first users $HOME does not help. Running a diff between the home directories first user and second user, there are no real differences between them. The users also have all the same groups assigned to them. The only difference is that the first user was created first, and the other users were created afterwards. Any tips on troubleshooting this?

I think vanilla gnome 40 turned out to be perfect and now it doesn’t need to go to dock and layout switcher.
I also think that having gnome-initial-setup would be helpful for ease of distribution.
However, it seems to me that gnome should be kept in the official publication. Since this is one of the most popular DE and its transfer to community edition will reduce confidence in it as a reliable solution

@philm @Chrysostomus I would say just keep it simple and leave that control to the users.

They would be disabled by default and the users just need to be instructed either in the user guide or the corresponding article on the Wiki to enable them.

Manjaro is doing something similar with GRUB and osprober anyway.

EDIT: For enabling/disabling I mean triggering pamac to install/uninstall the corresponding packages.

EDIT: For enabling/disabling I mean triggering pamac to install/uninstall the corresponding packages.

Gnome-layout-switcher already does this. It’s just faster because the extensions are already installed. Next we are testing if the bug can be avoided by not having dash-to-dock installed or pre-configured.

That is a very complicated choice you are facing. I don’t envy you the decision.

As a gnome user, I mostly use vanilla gnome. That said, Almost every time I want an extension, it is already available, tested, and functioning under Manjaro. It would truly be a loss if that level of integration were to disappear.

I understand the problem since most of the extensions are built against Ubuntu and Ubuntu is still only shipping with 3.38. While all the extension that I use are already available, I know that I’m not the only one that loves and relies on the attention to detail that makes the Gnome desktop work so smoothly on Manjaro.

For my part, if I have a choice, I will wait for the entire desktop environment to come together. Manjaro’s attention to detain, in my opinion, is the reason that Manjaro is at the zenith of Arch based distros as well as at or near the top of all Linux distros.

I agree, this is quite a dilemma. As for me, for the first time ever I dove into vanilla Gnome 40 and I have to say I like it. I’m far more keyboard dependent now and I’ve developed a very comfortable rhythm using the keyboard, mouse and 23-inch touch screen on my desktop PC. So, it’s no longer important for me to have the layout switching and should I ever cave in and go back I’ll simply install dash to panel once it’s ready (if ever!). I’m not concerned.

What I really want to say though is that you, the Manjaro team, have faced dilemmas before and made some really good decisions. I have faith. Of course, there will be some gnashing of teeth and defections. So what’s new and how is that different from any other distribution’s trials?

drop Gnome to a Community Edition

Won’t be a viable option to fork editions, rather than drop?

Official edition with 3.38 shell until the extensions ecosystem will be ok with 40, or following the Ubuntu timeline

Community edition with Gnome 40 Vanilla, as long as volunteers can mantain it, for those who will to use Gnome40 without switch to unstable branch.

Sorry if it’s a naive idea, but i think that could be a loss for the distro not to having an official Gnome edition.

This is definitely a tough position, and I want to thank the team for all their hard work on this.

If I could cast a vote, it would be for vanilla gnome if that’s the only path forward. I would hate to see gnome drop to a community edition. I (and I think a lot of folks) came over to Manjaro from a 'buntu via Manjaro Gnome. It was familiar, and provided just the right level of introduction to dive into Manjaro as my permanent daily driver. Having gnome as an official offering is a well paved road for new users. While community editions are great, having an “official” edition brings confidence to new users.

To that point, I spent most of my time in Sway these days… But I would never have become a Manjaro user and community member had it not been for the official gnome edition.

Everyone rejoice! @philm found the solution and patched dash-to-dock. We have now working proof of concept and proceed with the release. 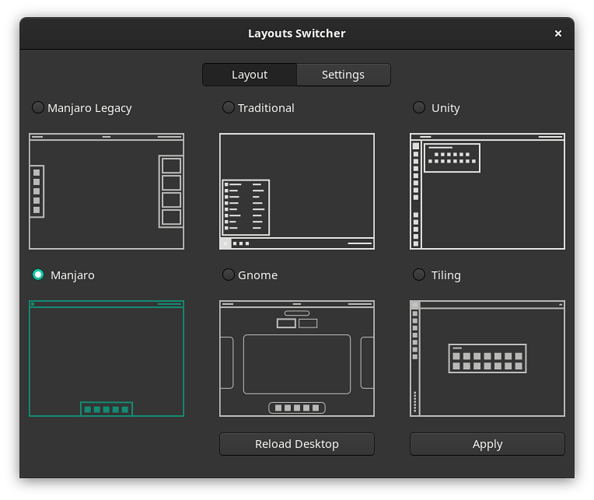 From that screenshot, I’m glad to see that the layouts preview artwork was updated as well.

Keep up with the good work @Manjaro-Team

Y’know, I don’t even use Gnome, and even I am VERY happy to hear this! It makes me extremely excited and I’m rejoicing about this, too!

Great news… Just in time when I switched to KDE

firstly, glad you found a solution for Dash to Dock and Manjaro Layout-Switcher.

Then, the ‘Dash to Dock’ extension would not be necessary if the Gnome developers provided a configurable dock. This is why ‘Dash to Dock’ was created. The dock, by default, under Gnome 40 (and previous versions) does not allow anything (no placement on the left, right, top; no possibility of placing the application icon in 1st position, etc.).

The Gnome shell extensions are necessary because without them Gnome is an empty shell. Another problem is that with each new major release the extensions are broken and the developers of those have to recreate them. It is not a good thing. A more active collaboration should take place between the Gnome team and that of the extension developers well before the release of a new major version of the desktop.

The ‘Dash to dock’ and ‘Dash to Panel’ extensions should be supported by the Gnome development team and not by independent developers. Knowing that they are commonly used.

Finally, I think it wouldn’t be a good idea for Manjaro Gnome to become a community version rather than an official version. Gnome being more suitable for certain devices (ex: touch screen).

Note: As I indicated in another topic, I tested the fork of ewlsh (dash-to-dock) for Gnome 40: GitHub - ewlsh/dash-to-dock at ewlsh/gnome-40
It’s not perfect yet but it gets the job done (Gnome 40 with Wayland).

Good job, Manjaro team! GNOME 40 is cool. I use the unstable version, and everything works great!

I just want to thank the developers at Manjaro for all their effort on this - I appreciate how much work it must have been, and how difficult these decisions are. I for one really appreciate Manjaro’s strategy with new Gnome releases - that it comes out once the common extensions are up and running and a smooth user experience can be guaranteed. It’s one of the reasons I stopped using Arch - because I didn’t want to have to deal with things I relied on as part of my day-to-day work breaking with updates. I’m really looking forward to seeing the new Gnome shell now it looks close to being ready!

I would also understand if developers in future decided to move to something much closer to ‘stock’ Gnome, too, though.

Also for me, ok but only with Wayland… With Xorg shell is completely stuck

when is the next release?