How to use hardware acceleration in Raspberry Pi with Manjaro?

The VLC player and Chromium which comes with default installation of Raspbian support hardware acceleration in Raspberry Pi.

How to use hardware acceleration to play youtube videos? If Firefox does not support it, does any other browser support it?

Also, how to enable hardware acceleration in VLC?

@ Forum Moderators: Can we create a separate tag for Raspberry Pi?

We already have the #arm section, I just moved it there.

The Raspberry Pi foundation has not really been focusing on 64-bit up until now, so the 64-bit drivers are not as good as it’s 32-bit counterpart, which Raspbian (now RaspberrypiOS) use.

Most articles indicate that Chromium performs the best on the Pi but bear in mind that most people refer to Raspbian and the chromium package there has RPI-specific patches.

Yesterday I installed Arch Linux (base Arch not Manjaro) on an RPI4 and while I didn’t get the performance others claim with Chromium on Raspbian (or RaspberryPi OS, whatever) it was still better than Firefox (not just Youtube, the browsing experience in general).

I did gather a list of CLI arguments to launch it though that I’ve added on top of the ones that came by default, and I did mess with /boot/config.txt to try to tweak the GPU performance (including overclocking)
gpu_mem=512
cma=512
dtoverlay=vc4-fkms-v3d
max_framebuffers=2

Oh and I’ve installed the “Iridium for YouTube” extension in order to disable high framerate playback (60 FPS) since I’ve experience a lot of interruptions with those.

Other than that, I haven’t been able to do much better so far. We’ll just have to wait for the software to improve. The hardware is more than capable of doing it, I’ve had even RPI3’s that played video better than this when running media center OSes.

And as @Strit said, 64bit is early and experimental for the Pi - which is easy to overlook but is actually very important to keep in mind

VLC does not make use of the builtin H264 decoder

When playing videos via VLC, the Raspberry builtin H264 encoder is not used, so the performance and quality goes down.

Will the update to kernel 5.10 improve GPU acceleration in Raspberry Pi as well, like it did in Odroid N2?

Update time! I just uploaded a new mesa-git package to unstable branch. And this is huge! Because this update actually enabled Panfrost support on the G31/G52 boards. This includes my Odroid N2. So I now have GPU acceleration on my Odroid, which has made Element really smooth. So that issue is no longer present. Plasma however does not really support it yet. Meaning it crashes Kwin/Plasma on login if I enable 3d acceleration in Plasma. But if I use software rendering in Plasma, the apps stil…

The new VC4 additions in the 5.10 kernel does hep with performance.

Can confirm that.
HW Accl. feels much more performant with V4L2 and Emby (Mediaserver).

Never used the Pi as desktop, so i cant talk about that.
But just install the rc kernel. Working flawless so far.
If you want to install the latest rc kernel, you need to switch to the unstable branch.

And then sudo pacman -S linux-rc-pi4*

curious if anybody tried this good news with kodi, new mesa 20.3.x , new kernel 5.10.x - I assume its all on 64bit - does the hw acceleration works ? Thats the only pitfall I have and its a blocker to move to 64bit system on my rpi4b.

I think we are talking about two different things here. The new 5.10rc kernel+mesa+chromium supports 3d acceleration (fishtank at 18 frames in new chromium) but I think there is still no h264/h265 acceleration in ffmpeg/vlc for videos. Correct me if I am wrong (hopefully

seems like progress on arm arch 64 bit the cpu usage went from 70 perc to 30 perc , its a move

I compiled graysky’s PKGBUILD today and did a little testing with th 5.10-rc5 kernel in our unstable repo and I am impressed. I have a NASA 4K UHD clip I got off the satellite which my desktop even has trouble playing and the video was smooth. When I had tried in the past the pi’s cpu cores were maxed out and jerky video.

Info in kodi as the video was playing:

Info on the video in MediaInfo: 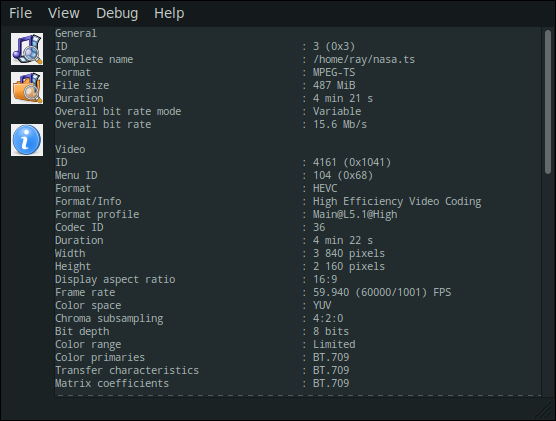 Which PKGBUILD is this?

Which PKGBUILD is this?