Where is the trick?

With Work Flow you have the ability to set separate system configurations for Daily and Studio work, and switch between them by one click. Needed services, autostart and audio configuration can be set in Settings via GUI. Just choose which one you’ll need.

Note that your session will be as heavy as you set it. XFCE session is set to give optimal experience, but if you add more fireworks, docks, conky etc RecBox tools will not make CPU and RAM usage magically disappear.

RecBox is made not to be the best ever made “Studio” like OS. One of the main ideas is to give opportunity for users with older hardware to create more advanced projects and help musicians to save money for better hardware for recording and/or be own music producers. Even if you prefer to leave album production for professionals there are many things you need to learn if you want to save stress for your bandmates and yourself and made the whole process faster and comfortable for everyone. There is no other way than take business in own hands and learn how things works. Spoiler: “10 things you need to know” videos on YT doesn’t help you much.

I forgot about this, thanks for posting

From last month things changed a bit, mostly visually but there are some small bug fixes and improvements as well. First what you’ll notice is consistent theming and new right click menu made with jgmenu (screenshots in main post are up to date | If somehow links are reverted to old ones, fresh ones you can find here). Obmenu is still available if you don’t like new one. Description of how to change it back is in How Recbox works which is in updating process. I thought I’ll run away from writing for a good time but I didn’t run far.

Because of swapping obmenu to custom jgmenu, part of options was moved to Side Menu and it works same as in Main and Side Menus. Which is very similar to how menu applets work in GNOME. Description how to replace font icons with regular icons can be found in How RecBox worls.

Meanwhile, I’ve updated a bit Bass, Guitar and AVL Drums tutorials plus uploaded bass one on LBRY (preview is only available from browser version).

It looks like it’s everything for now.
Regards and have a good day

September was pretty good even if I didn’t have much time to work on RecBox. Major improvement is manipulating options in rc.xml file. Before it was pretty easy to break config file when removing or adding new stuff but I figured out how to script it in better way. It’s not perfect yet but I’ll improve it soon (description can be found in How Recbox works > Config Files).

Other stuff it’s rather cosmetic and for the eye, but they change overall experience. At least for me. I guess

If you’re interested only on mixing stuff, here are separate PDFs:

Have a good day, regards

October was definitely to short for me, but I’ve manage to push RB at least a bit forward. I don’t have much to say, so here is the progress 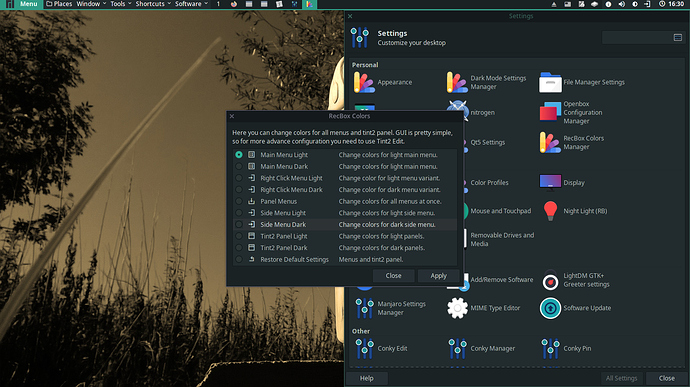 Hi folks!
This month I have some good news and some bad news and maybe I’ll start from bad one. Openbox version development is now suspended. Good news is I will improve scripts from time to time, so you don’t need to migrate anywhere, I will not add new things only, which is not a big issue because the environment is pretty complete. Another thing is new versions of RecBox will be made on XFCE, you can decide if it is bad or good news. However, first tests tells that CPU and RAM usage will be very similar to Openbox and whole setup will be much simpler and less confusing. The First version based on XFCE will arrive in 2021 but I can’t tell which month exactly. I need to rewrite everything for a new setup, so it will take a while but it will be not that painful all in all because a big part of stuff will be managed differently with DE help.

All in all regular XFCE users will benefited from environment swap, because things like Dark Mode or Global Themes can be easily installed on non RexBox XFCE setups. 2021 looks to be exciting!

After a month of playing with XFCE I need to say that it’s better than I thought will be. First days I was a bit like a child in a haze, but now I feel pretty comfortable using DE tools and scripting. While working on Openbox version I learned a bit, so XFCE will be much “smarter”. For example system configuration will be fully automated and don’t require user intervention. User only need to mark options which want to use.

From visual aspect all stuff will be stored into Side Menu and Whisker Menu which take the role of Rofi menu. Spoiler alert, font icons are changing while enabling night light and dark mode, plus color scheme of side menu is changing automatically without using separate config files and manual configuration. Magic

At the moment desktop looks like this (Dark Mode On) 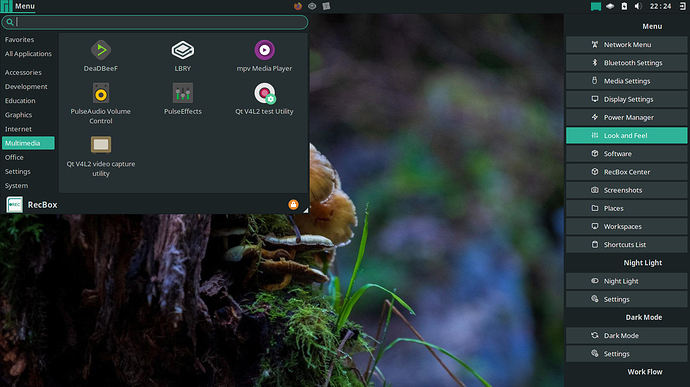 There is more, but I’ll describe them later while updating the main post. Have a good day/night! Regards

Hi folks!
We reached to February, so it’s time for monthly spam

Pretty big chunk of January I spent on working at Work Flow script and its starting to look pretty good. List of items from autostart is generating on the fly (Session and Startup), so it will contain apps installed by user, and it doesn’t matter it is full or minimal installation. Probably (I didn’t test it yet) will be possible to use Work Flow at least on MATE and probably on GNOME. I’ve read somewhere that autostart works same on them, so there is chance that WF will be pretty versatile.


https://i.imgur.com/2L2ndbA.png(image larger than 1024KB)
At least for now list of services is fixed and contain those which disabling don’t result with black screen. Listing all will be too confusing for new users I think, even for me. So at least at the moment we’ll go with curated list. If there will be any suggestions later, it will be no problem for me to add new one

I’ve almost forgotten. Except setting up CPU scalling there will be governor choice, so everything will be in one place

Audio configuration don’t exist, but I have nifty plan for it, and done some tests

From the other cool stuff, I’ve finished shortcuts list which is dynamically generated.

Night Light settings can be set by slider widgets. I need to add back buttons, because at the moment cancel button opens Main Menu

Dark Mode look and work pretty much the same as in Openbox version. And like Night Light Settings need Back buttons

Desktop tweaking are on finish, and not much stuff left to do, so I’m near to final shape.
Aw, and I’m working on tutorial for voice recording, mixing and mastering. I’m in half of work and maybe will be finished to the next monthly spam.

Take care of yourself. Regards

I didn’t see unfa’s setup, but it should be very similar or the same except pipewire (not sure if he still uses it as an audio server). All hail Arch Wiki

Anyway I’m happy you like my Frankenstein and will to help. I don’t have concrete questions now, but I’ll text you today’s evening or tomorrow

This month I don’t have much to share due to lack of time, but… there is a small progress, like I’ve discovered that desktop environment configuration didn’t work

however it has added value, because I’ve changed a bit of behavior of desktop environment and shortcuts. For now, I only fixed the panel (I hope. I didn’t test it yet but this time I make changes in fresh XFCE installation under virtualbox.), but changes arrive soon.

In February, I mostly played with smaller things like automation of config file creation for tools, Side Menu and Panel content. In Openbox version the panel had plenty of menus, but they were pretty useless at least for me, so this time I’ve decided to make everything more compact. For most used programs there will be one menu near Side Menu which probably will be filled with Cadence and other KXStudio Applications and other software will be in Whisker menu under custom categories. 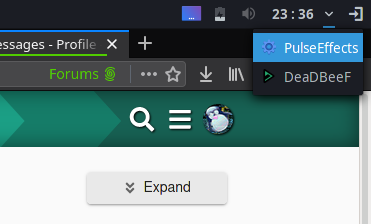 At that point workflow tool is under stagnation, I need to re-think few things and implement automatic config file creation for services and system audio tweaks. I’m not sure yet, but probably I separate workflow script to a few smaller ones.

It looks like that’s all this month, have a good day! Regards.

March wasn’t bad, but could be better. I had almost two weeks off because of health issues with maxillary sinus, but the rest of the month was pretty good.

Despite all bumps we are closer than farther. Yay! 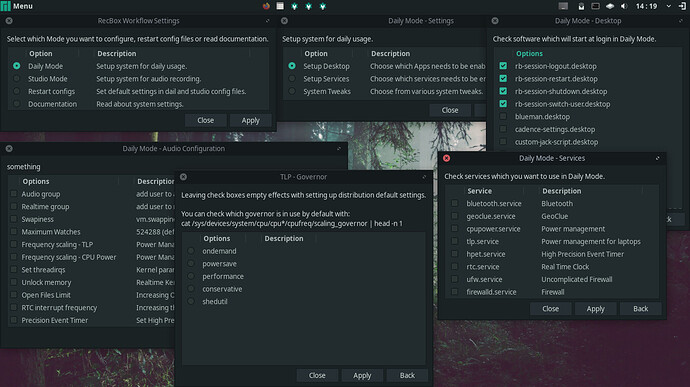 Quick, we don’t have time!

There is not much progress as new lines of code this time, but… I have cool news instead. First, I finally managed workflow tool structure, from config files to scripts and GUI. Second, translation will be available (at the moment everything is in English)! Side Menu will be the tricky one, but GUI (Zenity) and terminal outputs for tools can be translated pretty easily

( If workflow GUI looks confusing, no worries I’ll write the guide as well

Have a good day! Regards

May was pretty good, I’ve start with creating icons for tools and rest of the month I was working on Workflow Settings UIs. Mostly rewriting everything, but I think I’m on a good track. Finally. Every menu with checkbox will now use loops, which will make code shorter and faster than abusing if statements all along

Support for translations is added, but I need to look how it works in Manjaro Architect, because I made it in guerrilla style. However, it’s working

I thought it will be easy-peasy, but it’s much complexed than I thought at beginning. Maybe if I actually know what I’m doing instead of constantly improvising and learning on the fly, whole thing will be already finished 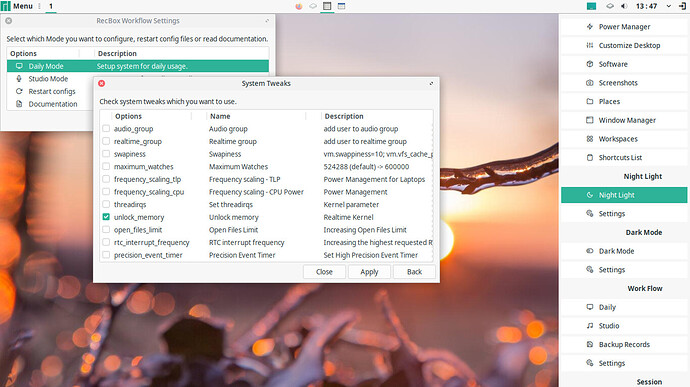 There is also Daily mode icon missing, I don’t have any concept how it can look, but it will land in repo sooner or later. 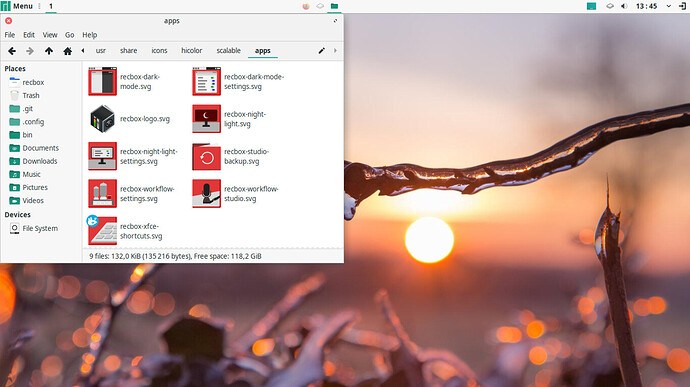 Have a good day! Regards

Work on Workflow tool, is slowly coming to the end. Currently, I’ve started rewriting system tweaks configuration, and finished Settings UI. Desktop and services configuration are done as well. In the meantime, I’m adding translation support to the rest of the tools, plus some improvements when I learn something new. Aww, I’ve made an Icon for Daily Mode, nothing special but at least icon’s set is ready

Cross your fingers, so I don’t need to leave my basement and finish the rest of the stuff quickly

As I thought, the whole month I spent on writing system tweaks configuration and guess what, didn’t finished it yet. I guess someone didn’t keep their fingers crossed

Meanwhile, fixed some errors and improve something, but don’t remember what exactly. Probably Check for Updates script. I fell in limbo or something, everything looks the same

For everyone waiting for Work Flow, bored with waiting. Heads up, after I put everything together, I’ll push it to a separate repository, so you don’t need to wait for RecBox