@maxemilian, just take a look if you have any obvious error entries since your last boot: $
journalctl -b -p3 --no-pager --no-hostname

Here it is no notable thing…

We might have different issues. Maybe it’s still worth checking like a week back versus last boot.

Older HP Laptop, AMD FX with Radeon R7, does this: I have a problem with Mozilla Firefox

And the Newer Laptop, Acer Ryzen 3 with Vega works as it should!!, No problems!!

So not sure whats going on With Manjaro/Firefox?

You know what’s funny about my situation when ff decides to randomly stop? My old friend, the frozen-window desktop snake effect is back if new apps are launched and dragged on the current workspace. I missed seeing this from back in the day, it’s a cool effect. 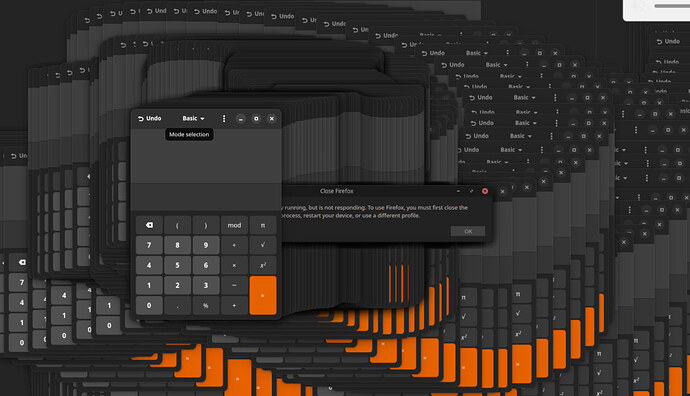 P.S. I did a firefox “refresh” and cache blown away, no effect.

I couldn’t catch with grep anything

I’ve good news! Firefox running normally now!
Firefox begin to run around first working day stress. Great… I need its extension you know life changer.
I didn’t even restart but it is in well situation now. Thanks for any help.

Good to hear. I’ve simply disabled all acceleration again and I believe that’s the root issue for me:

Nice to see the edit there by @alkl but my issue may be unrelated to highlighting text, but ultimately with the same freezing outcome. Disabling hw acceleration completely is a fine workaround for now.

Also, I figured out a reproduction. When hw acceleration is enabled, and ensuring window grouping is disabled in xfce’s window panel settings, then in ff select: hamburger → downloads, and with the firefox downloads window (labeled as “Library”) visible in the taskbar, keep fastly left-clicking it (there in the taskbar) to keep minimizing/unminimizing it until the entire window fails to paint, causing ff to freeze entirely. For me, it’s around the ~7th unminimized click before the window fails to paint.

No, Never had this problem on either 106.5 or 107.0, On Desktop I7, still have the NVidia Hardware acceleration bug, Turn it off or crash, and an older AMD K8/Radeon Laptop is the problem with Firefox not loading at all then finding it’s running 3 times in task manager, kill 2 below the top Firefox and then it loads, really annoying to do this every time i need/use Firefox, but again not the problem listed.

The issue with libx11 primarily happens when playing a video and copying something to the clipboard:

For me that freezing was instantly, when trying to Copy a password from Bitwarden (Firefox Addon) to the Clipboard, while playing a video. The entire Firefox process would come unresponsive. (Not even clickable, would crash with Alt + F4)

I also experienced an issue, where Firefox somehow caused the whole desktop environment getting unresponsive (idk if this is the one you all are referring to in this thread), only the mouse was working. Haven’t happened since I applied the libx11 patch.

Now the only thing left is that Firefox windows / tabs would come unresponsive (UI element not clickable / closing a tab would leave an empty space) at some point.

It seems that there are two - three issues at play at the same time, at least for me.

Do you got any journalctl dumps we can look at?

We might have different issues. Maybe it’s still worth checking like a week back versus last boot. journalctl -p2 --no-pager --no-hostname --since 2022-11-13

I suffered the same problem for ~2 weeks and now found a solution to what had been the issue - on my machine. Since this thread helped me a lot, I’ll post it here.

Deactivating hardware-acceleration did not help, so I focused on potential file manager issue by running from a terminal

So, pacman -S openssl-1.1 solved all freezes/lags for me. It looks like the openssl package internally switched version from 1.1 to 3.0. The gvfs-afc package should better upgrade or depend on openssl-1.1 package instead.

Hope it helps someone. best regards.

I confirm the issue, FF freezes quite often and for no apparent reason recently.

Interesting analysis, thanks for sharing that. “openssl-1.1” is required by steam-native-runtime so looks like it stayed on my system (in addition to “openssl” v3.) Thankfully I don’t have Apple devices so I also safely blew away “gvfs-afc” without breaking the entire xfce desktop

Here is one of the Bugs I am experiencing: 1802229 - Firefox window randomly freezes

There is a video attached in that bug report. It basically shows rapidly switching between tabs; after a few seconds it will freeze (not update the contents of the Window). However it seems to still respond to mouse clicks, which are simply not displayed.