https://ibb.co/5v8ZyVh (sorry to post the link this way, I can’t embed images, nor links)

When I refresh firefox settings it’s loads with the new Proton UI, but after a logout/login or system reboot it’s returns to the UI presented in the screenshot.

Maybe you need to disable the new UI?

I want the new UI and disabling it don’t make a difference, the UI stays almost the same.

The new ISO comes for Firefox with firefox-gnome-theme-maia … is not an extension. Initially was activated by running the /usr/bin/firegnome-enable.sh but now is active by default. If i recall correctly you can remove it and firefox will have the “native” ui. Probably best to ping @Chrysostomus

To disable the theme, remove the chrome folder in your firefox profile and restart firefox. Your exact profile name might vary, but this should almost surely remove it:

If you have difficulty finding your profile folder, you can also check it like this: Go to about:support in Firefox > Application Basics > Profile Directory > Open Directory

The ideia of these customizations is to make firefox looks similar to epiphany? I don’t like the epiphany interface and would like to suggest a way to use the default firefox interface.

firefox-gnome-theme-maia … is not an extension. Initially was activated by running the /usr/bin/firegnome-enable.sh

The idea is to make it look like a gnome app. I like having a consistent look between apps. This is an optional feature and can be opted out of. We are working on making the theme selection easier in someway.

With the latest update, there is a switch in gnome-layout-switcher to toggle the gnome-theme in firefox. 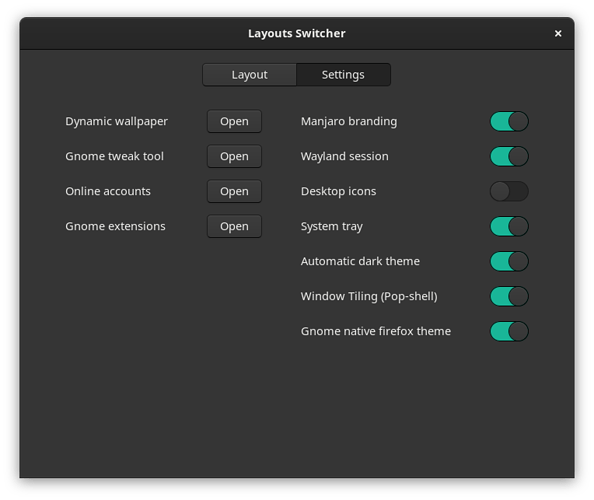 i had the same problem. After disabling the Gnome native firefox theme in the layouts switcher it would reenable itself after each reboot. For me the solution was removing the script under startup applications in the Gnome-Tweaks application. Hopefully this helps you.

For me, the switch worked. Thanks.