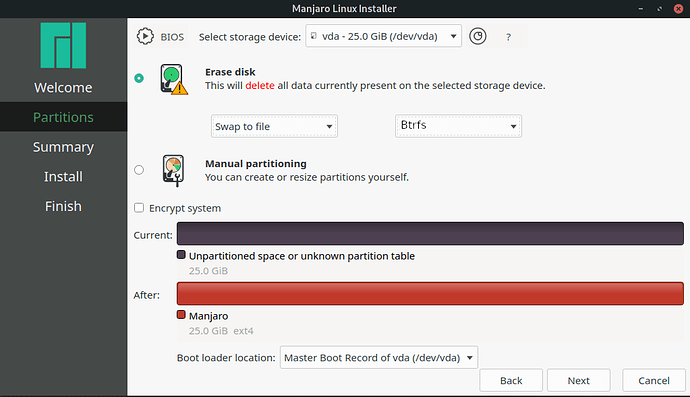 My goal is to make easy and sustainable snapshotting available in Calamares for a future manjaro release. On the roadmap there following subtasks:

This topic is for discussing what would be the best default subvolume layout for btrfs systems.

Does anyone have any other suggestions for btrfs support in manjaro? @eugen-b?

without its own subvolume with disabled cow, swapfile can lead to file system corruption

Keep in mind that BTRFS only uses the mount options of the first sub-volume mount command used, i don’t know if this applies to the whole system or just a single drive.
I remember reading about the usage of a separate sub-volume for the swap file, but i think you needed to set the “nocow” flag on the created file instead of the sub-volume…

This could be mounted as a tmpfs IMHO

I have been fiddling with BTRFS in the past, but am not using it anymore…

Keep in mind that BTRFS only uses the mount options of the first sub-volume mount command used, i don’t know if this applies to the whole system or just a single drive.

This could be mounted as a tmpfs IMHO

Or perhaps create sub-volumes inside of sub-volumes to better preserve the tree hierarchy.

I would very specifically want to avoid nested subvolumes because it

(Note: For btrfs,…
…If the ‘C’ flag is set on a directory, it will have no effect on the directory, but new files created in that directory will have the No_COW attribute set.)

I can’t say it will or won’t work, you would need to test it out to be confident

Don’t understand why it would be messy, because it is just like a bind-mount over a mount point.
Never knew BTRFS auto-pruned unused sub-volumes…
Besides the sub-volumes you create will be populated anyhow, so no unused ones there.

I never used that app, but i’m sure it should be able to handle it same way as /proc etc…
Eg. Either by staying on same filesystem or by excluding directories.
Anyway i’m not familiar with it.

Timeshift automatically deletes old snapshots to save space. If there are subvolumes nested under a snaphot/subvolume, you can’t delete that subvolume before deleting the subvolumes under it, and timeshift does not do it.

Don’t understand why it would be messy, because it is just like a bind-mount over a mount point.

Have you tried it? At bare minimum you should not be able to delete the old @ if you have subvolumes nested inside it. And you will want to delete it eventually if you need to restore a snapshot, otherwise you end up with a ever growing diff that just eats up your disk uselessly.

Is there some specific advantage to having a nested subvolume layout instead of a flat one?

Is there some specific advantage to having a nested subvolume layout instead of a flat one?

I don’t really see that as a major benefit, considering that fstab get’s written by the installer.

Ok i just read that link, and can see how it can cause a problem now indeed…

You could ofcourse move the @ to a new name and reconstruct the final structure by using bind-mounts, but it would involve a bit more effort to use a snapshot indeed.
Anyway it was just an idea that poped-up in my mind back then when i fiddled with BTRFS a bit, i never tried the snapshot functionality of it yet.
So lets just drop that idea then

I was actually wondering when Manjaro is going to provide support for BTRFS and I am happy someone took initiative. I am looking forward to see it come true and all the best with development.

On another note, please be aware of the grubenv limitation on BTRFS that I have hit myself. I have opened a thread about it, but fixed it meanwhile. You might want to take Fedora’s approach of making a separate partition for \boot that is on ext4. Feel free to correct my posts if you find any mistakes.

Why are people who never used BTRFS suggesting wrong ideas here?
If you haven’t used BTRFS, and don’t even know how Timeshift and snapshots work, don’t suggest wrong ideas. This just wastes other’s time. Instead, get a fresh partition, do an installation on BTRFS, and experiment with it.

@Chrysostomus @TriMoon /var/tmp shouldn’t be mounted as tmpfs. /tmp is mounted as tmpfs. /var/tmp is for temporary files that should persist between reboots. This is in the directory spec (I don’t know which, but maybe freedesktop). So if an app wants to store temporary files, then use /tmp, but if it’s needed between reboots, then /var/tmp. Erasing /var/tmp at shutdown will cause unwanted effects.

@Chrysostomus Storing snapshots of a subvolume inside itself is not a good idea in my opinion.

Let’s say storing snapshots of @ (mounted at /) in a directory on itself, e.g. /snapshots. It is not a good idea because it can be easily messed up. The directory structure would be messy because every snapshot would contain empty directories in place of all the previous snapshots, but not the actual previous snapshots.

It’s really messy.
The biggest problem with it is that if one snapshot is restored by

then all the other snapshots are deleted, because subvolumes are excluded from snapshots, and all the snapshots are stored on @, so the /snapshots directory contains empty directories on snapshots. It is possible to move around directories when restoring, but it’s too hacky and error prone. The rollback functions of backup programs is very error prone and is broken in many situation.

On the other hand, if snapshots are on a separate subvolume, e.g. @snapshots, it is possible to roll back the system permanently, without reboot. It can be mounted on /mnt/snapshots or similar.
The directory structure would be much cleaner:

It would be easy to

All other snapshots would be preserved, and no hacky directory moving is involved.

Let’s say, I have a broken update, which is unable to boot, so I can’t boot @, but I have a backup from before the update in @snapshots/@/before-update.
I boot into it from GRUB BTRFS menu (so the system is temporarily restored).
I mount the partition root into /mnt/btrfs, then cd into this mount point, then

And my running system is permanently restored to its previous version. If I restart the system, it will boot into the restored version. (supposed subvol mount option is used, and not subvolid).

This easy moving is not possible with nested subvolume layout, or if snapshots of a subvolume are stored on itself.

Sorry if it was hard to understand, I will write a blog post about it with more examples.

I agree with you, as you can see from the preceeding thread. There is no good reason to nest subvolumes, but many good reasons not to.

Not sure who this is directed at, but I’ve been using btrfs as my main filesystem for about four years or so.

Not sure who this is directed at, but I’ve been using btrfs as my main filesystem for about four years or so.

It’s not directed at you, but somebody suggested a really dumb idea (that could result in broken installations), without trying it.

I recommend using Snapper instead of Timeshift.
It allows more flexible configuration:

Snapper does have its advantages, as you pointed out. On the other hand, timeshift brings following to the table:

So, switching over to snapper and snapper-gui would require careful planning. Ideally this could be user choice, perhaps as part of manjaro-hello? @Ste74 what do you think?

but that’s a problem, in my opinion a unsafe option to use for the goal we want.
You can setup the system, use ro-snapshots and even boot into these ro-snapshots into DE/GUI with only minor problems. And that’s a safety point.

Snapper is good but there exists some caveats for normal users:

I use BTRFS, snapper, snapper-gui, snap-pac, grub-btrfs and snap-sync on 5 machines. All machines use a central BTRFS backup storage and SSH tunnels. This setup need knownledge of BTRFS but i think is a lightweight and a commonly easy setup to understand with most features enabled we want.

Even better would be a solution to boot on damage into a ro-snapshot with GRUB, start a small scriptlet that make above rollback automatically and reboot.

On my USB backup drive i installed a identical bootable Manjaro system like on all my machines. The only difference is another subvolume @backups. Into this @backups subvolume if store with snap-sync my backups of my machines, like @backups/($hostname)/root/#/snapshot.
On realy hard damages of my machines i attach this USB drive, boot his Manjaro Installation with his @backups subvolume and made my recovery, by hand. Because we never knew exactly what errors we get in future we can’t relay on a fully automatical tool to make this recovery for us.

You see, the @snapshots subvolume is outside of the subvolume we make snapshots from, this is the most often suggested layout for BTRFS. Opensuse goes another way and i don’t know why suse goes the more complicated way.

My setup need knowledge by the user. Using Snapper, his manual setup, the trick with the bind-mount of /var/lib, the manual rollback, the recovery with help of the backups made (manual), all this are small traps.

In my opinion: using BTRFS is the same discussion as using cryptography. In both cases you have to known about it, you have to learn some basic stuff to handle it correctly. A easy-dumb-use is currently not possible. The needed toolchain is’nt ready yet. Using Timeshift seems on first look a nice idea but on second look, it’s not the right choice. The goal is system-stability, safety and writable snapshots are contradicted in my eyes.

But otherside: if Manjaro where the first great distribution that had manage these pitfalls with BTRFS, Snapshots and Backups and made it easily available for common users, then it where a big win for Manjaro.
I was a windows user over about 25 years, but now with BTRFS and his features correctly used i would never go back again. My descision to choose Manjaro as my linux distributation is based on the use of BTRFS.

PS: sorry for my english

Sorry if it was hard to understand, I will write a blog post about it with more examples.

No, i understand you fully, you speak my meaning

As above shown: i use

and they parent is subvolume @snapshots. I think it’s even more easier to understand and cleaner. If we in future expand this concept we have the choice to create new subvolumes for as example @srv, @opt in same level as @,@home,@var. Or if we change Snapper config to add a new snapshot we attach it into @snapshots as example @snapshots/srv. Flat outside BTRFS layout for all system relevant parts, and hirachical BTRFS layout for all snapshots with one parent @snapshots. This Parent subvol can be only seen and accessed trough the /btrfs mountpoint of BTRFS Root-Filesystem mount.

Honestly never used BTFRS… maybe can be the time to try it out. After the choice of the structure sure we have to think about the system for managing it in Manjaro by default. Offer an alternative in hello for me no make sense because most users don’t know more about BTFRS if we exclude the ability to manage snapshots. Power users can set themselves the system in my POV.