I have the same problem as MPV can't play files over samba share anymore because of FFMPEG, the difference is I’m using Manjaro ARM on Raspberry Pi 4B. So per this solution, I tried uninstalling mpv and building ffmpeg-git with --enable-libsmbclient option in the config file. Then there’s this error:

How do I solve this problem? Thanks.

Thanks for the quick reply! Do I change PKGBUILD’s arch=() line to arch=('aarch64')? I tried this and continued building intel-graphics-compiler-git but there’s a CMake error:

Can I ask if I changed arch=() line right at all?

A little further down in the pkgbuild, there is the section:

It appears it is unable to determine the host architecture… which is not a good sign this build will be successful. But maybe this will do the trick.

Something does not smell right using the pkgbuild from aur that looks like it is really geared for a desktop. Have you tried the arch-arm build that we get from them? They removed the nvidia and intel stuff and have some arm config’s added.

You will have to add in the PKGBUILD arch=('x86_64' 'aarch64') and add --enable-libsmbclient \ as explained in the middle of the configure section.

Thanks for the reply! I tried your suggestions but no luck, the build() ran but after long process there’s error. I’m trying @Darksky 's method.

Yes, take @Darksky’s advise, he is far more knowledgeable than I.

I built the package like I described above and it compiled. 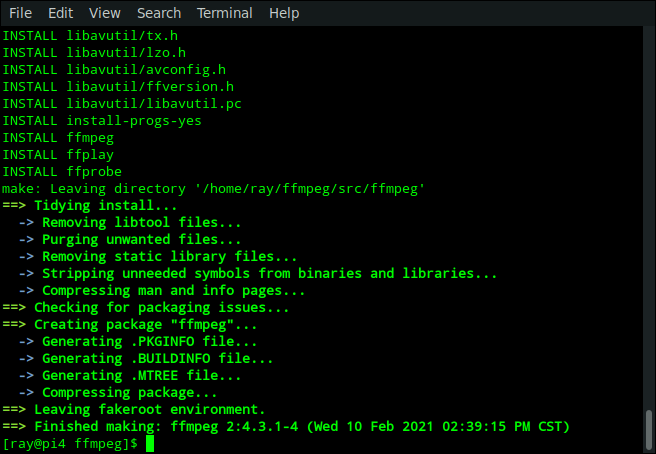 Could you please share the exact commands to build ffmpeg?

I used pamac build ffmpeg and it prompts

Yes, take @Darksky’s advise, he is far more knowledgeable than I.

We all can not know everything on every subject but as a collective of all here we will be unstoppable.

Could you please share the exact commands to build ffmpeg?

Hold on. Putting together a pkgbuild for you.

Here is the PKGBUILD.

That works well! Thanks for you time and patience. I need learn more about Arch Build System.

So with your advice I managed to build ffmepg with libsmbclient enabled. Then now should I build mpv on top of this or install mpv with pamac directly?

Then now should I build mpv on top of this or install mpv with pamac directly?

I am not sure why he uninstalled mpv in the first place. He said that mpv switched to using ffmpeg for smbclient but never said anything about re-compiling mpv with any extra config. If that is the case then install from the repo.

Meh you have successfully drawn my attention here. The uninstallation of other dependencies is meant for the purpose of avoiding complaints from pamac which sometimes barfs a whole lot of arguments, such as the need to even uninstalling telegram just because it has dependency on ffmpeg. If some perfectionist wants to maintain a clean sheet of the system packages and totally pure integrity of dependency chains, he may first try to use pamac to remove the original ffmpeg packages, which therefore brings out the ancillary confirmation of uninstalling all the depending applications. Someone will press “y” to agree, which leads to a mess of recovery operations later. Thus my advice to uninstall mpv is a friendly reminder just to prevent novice users to mess up. As you may be aware, the original post was written in Chinese intending for Chinese users to solve the problem; thus I extended the care to a bit more latitude that leads to safer operation. Hardcore eastern bloc fellows whom I respect can totally ignore it.

And after building ffmpeg, it is OK to be back to GUI pamac to install mpv at will. Theoretically ARM devices would save a lot of power, which I am interested in its performance.