Another Stable update is upon us!

We are in need of testers for our arm-testing and arm-unstable branches.
So if you are adventurous and want newer software quicker, we would love for you to help us test out the new packages in arm-testing branch.

All you have to do to switch to this branch is:

We would then love for you to give feedback in our update posts in #manjaro-arm:arm-testing-updates. That way we can better find and fix bugs, before they hit arm-stable branch. Thank you!

This is a wiki post, please edit it when you find a solution to an issue you encountered

DP Alt Mode no longer works on Pinebook Pro
This is a known issue, the hacky patch we had to enable this has broken in recent kernels.
@tsys and Ayufan are looking into it.
As a workaround you can install linux-pinebookpro again.

Odroid c2 kde and Odroid n2 kde up to date, it works.

The n2 don’t reboot with the GUI…

I am upgrading system on RaspberryPi 4B, pacman shows that brcm-patchram-plus conflicts with pi-bluetooth and then update is interrupted.

Then do your full upgrade and reboot

The new pi-bluetooth package that dropped the dependacy is also in this stable update but looks like it is has not gotten cleared out of the pacman databse at this point of your update.

I can no longer connect to 2.4GHz WiFi beyond channel 11. Before, there was issue with 802.11n networks, so I’ve set my router to b/g standards. I’ve Pinebook Pro and I’m using linux-pinebookpro kernel with uboot-pinebookpro-bsp. I’ve crda installed previously and WIRELESS_REGDOM=“PL” is uncommented. I can connect to 802.11n networks and channels beyond 11 only using WiFi dongle that’s using rtl8188fu driver installed from AUR. I think it is a firmware issue (from the recent linux-firmware or whatever package containing the firmware for built-in wireless for PBP).

The package for the Wifi in the PBP is called ap6256-firmware and should not have been updated this time around. It was a while ago though.

On the Pinebook Pro:

Edit 3: Good news – it was just in my head. Performance is equivalent to what a fresh install on a fast SD card was. That being said, mesa-git did ultimately result in the initial loss of performance I believe – largely because it crashed kwin and despite reenabling OpenGL detection, I experienced some funky behaviors.

So, I might recommend just sticking with the standard mesa package for now. The update seems great as far as the Pinebook Pro goes. Apologies for the wall of text – it sometimes takes awhile for me to finish doing my self troubleshooting and I get curious if anyone did it first.

Thanks for all of your hard work!

Interestingly, I tried to update to mesa-git. However, I discovered I had worse performance (it seems with Plasma KDE itself). I then went back to the standard mesa package.

Laggy windows; laggy tooltips (slow to render), lag when drag clicking for the select box on the desktop, black background when logging off, shutting down etc (but not when booting up).

I tried reinstalling plasma, etc, as well as mesa again (as well as the additional packages I had). CPU usage is well within expected ranges – between 0 and 10% on the desktop, with no core pegged.

Memory usage is below 50% as I write this reply.

Hoping I can resolve this without having to try another reimage, heh.

Edit: Well, after posting this, it at least seems like after toggling the Compositor’s rendering back end and reinstalling some related packages… well, it’s at least close to normal. Actions like dragging a box on the desktop still seem a little bit slow, as does the UI on the Package Manager GUI, but it’s at least closer to normal.

I may also just be having a more critical eye after running into an obvious issue not long ago.

Perhaps someone else with a Pinebook Pro can confirm their “smoothness” when doing something like dragging a select box on the desktop?

Edit2: Yea, it’s like I don’t have hardware acceleration on the desktop. Diablo via Devilution still worked fine, for example. I’ll install to an SD card again and compare. Maybe it’s all in my head.

I (perhaps naively) updated Pinephone (not convergence-edition) from Beta 2 (with Phosh) without checking anything beforehand. Was locked out for a while - password no longer accepted… a few reboots and intentionally wrong passwords later the password was accepted again.

seems to be working fine now, thanks for the work!

edit: drh seems to have it figured out: post 11 in the /manjaro-arm-beta3-with-phosh-pinephone/ thread. [can’t link to it unfortunately - new user limits]

I’ve flashed manjaro-sway edition some time ago (I think it was 20.06) and I was impressed. It was the most fastest and responsible OS for original/old pinebook I’ve tasted so far. Among other things it could play HW accelerated videos through mpv and chromium worked to my satisfaction (when I consider the performance of the old pinebook).

However after some updates chomium became less usable. Some minor glitches appeared when page was rendered, but after the page was loaded It went ok. The next update leaved the glitches after load, but after tab switching, the page went ok again. And after the previous update (and also this update) the chromium is unusable. See picture. 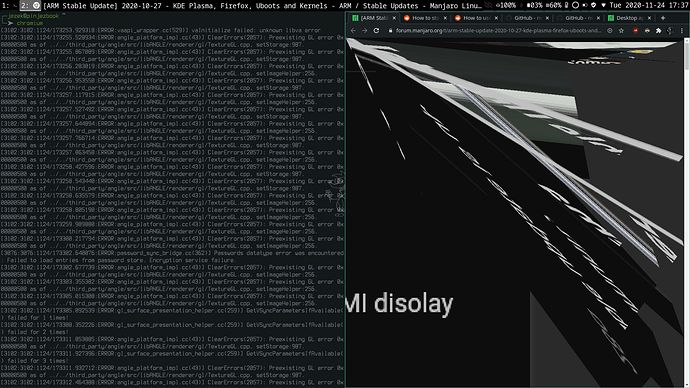 Has anybody some experience with this kind of bugs, or has any idea how to solve this annoyance?

I’ve tried to turn off HW accelerated 2D rendering in chrome://flags, but it had no effect.

Why not use Firefox?

You answered with a question, so let me answer with a joke.

Patient: Doctor, my hand is swollen, red and it hurts badly. I can’t do anything with her. Can you help, please?
Doctor: Why not use left hand?

Jokes aside. I know, that firefox works or exists, but I use firefox only when chromium is not available. Just a matter of preference.

Maybe it wasn’t working before, but the router “choosed” to switch to the channel 12 right after the upgrade, malice of inanimate objects.

Hi.
Happy to report that there are no issues so far with the update on my PBP (KDE version)

LXQt 16 also brings some long awaited functions to the PBP

Thank you all contributors for your efforts, much appreciated!

I’m new to Manjaro, but I’ve been using Debian in different ways for many years, so I’m not a complete newbie

but there’s still some learning left to do regarding “Manjaro-way” of doing all things Linux. I’m liking Sway on PineBook Pro so far, and looking forward to improvements (like functioning suspend :-p) yet to come.

Specifically this issue, is for Trusted Firmware - ARM to solve, so it will come in a u-boot update at some point, when it gets developed.

getting loads of 404 mirror errors, how do O update/refresh them?

getting loads of 404 mirror errors, how do O update/refresh them?

I think it is:

I entered as you suggested, and all looked good. I tried for an update and still got the message. Do you have any suggestions?