First boot with the new 5.16 kernel has been stuck on the first boot line for 9 hours. Older kernel claims to not be able to load efi. The download and update was all done through the gui. I made sure to -Syu in the terminal for regular packages though.

What can be done to either “fully update” this new kernel, or restore my old one (5.13)? 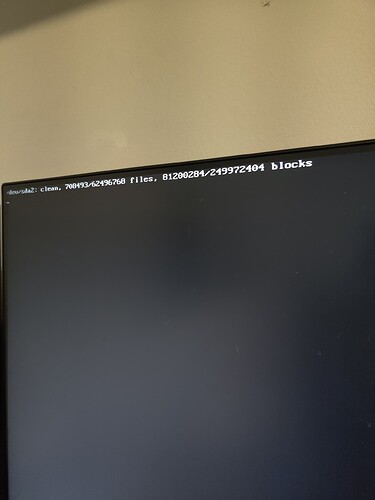 How to boot from USB into live Manjaro (for repair):

How to boot into my system from usb? Installation & Boot

Hi newbi question my desktop is XFCE my pc is 64bit 60gig hardrive. I did a recent up date and now manjaro won’t boot up. I get a message saying I need to have a kernel installed first. I’ve tried advanced option but even the fallback won’t boot. I did some research that it’s possible to recover my installed system by chroot using usb but not really sure what to do after I get the message below. In the terminal I typed “manjaro-chroot -a” below is the message I got. “Mounting (ManjaroLinux) …

Difficulty: ★☆☆☆☆ Strong of its many members, the Manjaro support forum can provide you help whenever you have an issue with your Manjaro installation. But in order to work efficiently, we shall also ask you to follow three major steps. Keep calm and read First some basics: whenever you need to troubleshoot, chances are the solution is already under your nose. Find error messages Very often when an applications crashes, and sometimes when it misbehaves, it prints an error message somewhere. …

Actually that kernel is EOL, so you will not fix it.
Kernel 5.15 would be my recommendation. Not sure why people jump directly to the newest kernel either while they keep an EOL one …
You can install 5.15 from TTY via booting in runlevel 3 with your curent kernel, or from Live media and chroot the installed system.
Let us know if you need any pointers on how to do that.

When I installed 5.16, I was under the impression that the “rc” version was 5.17 now, and that 5.16 is “stable”. The issue I see is that the cursor is stuck blinking after that first line booting in 5.16. However, I am able to interact with the terminal of 5.13. Would I be able to execute my commands from there? If so, what would you suggest?
Because this is my main machine, burning an iso would requure using a friends computer. I would prefer to do what I can from my computer. But if a recovery disk is required, I can manage to make one.
Thanks in advance

If you have acces from TTY, is perfect, i actually prefer it over the chroot, so then run this commands as your user:

The you reboot by systemctl reboot and while in GRUB menu, go to Advanced and select booting the 5.15 kernel. If that will still fail, then go again to TTY, but this time on the 5.15 kernel and do:

so with that we are sure the proper kernel modules and driver for nvidia are installed properly.

Just tried it out, seems like each command is failing somewhat due to no name resolution. I would assume having the 5.13 terminal in “Emergency Mode” likely wouldn’t provide the best experience. I think using chroot might be a better option in this case, it is just going to take me about an hour to get it burned. Unless I can open a terminal in the 5.16 kernel, which I highly doubt.

I have occasionally run into this problem when changing kernels. For me simply powering off and on fixes it - all subsequent reboots and fsck work as expected.

@rubiksolver007 you may be able to get to a TTY by pressing CTRL+ALT+F2 on the 5.16 kernel

seems like each command is failing somewhat due to no name resolution.

sounds to me like networking isn’t getting configured at boot, are you on WiFi or can you connect via Ethernet?
Do you know the correct Default Gateway & Subnet settings for your network?

Thanks Bogdan. I was able to install 5.15, but on the last step in tty I get a “breaks dependancy” for nvidia-utils 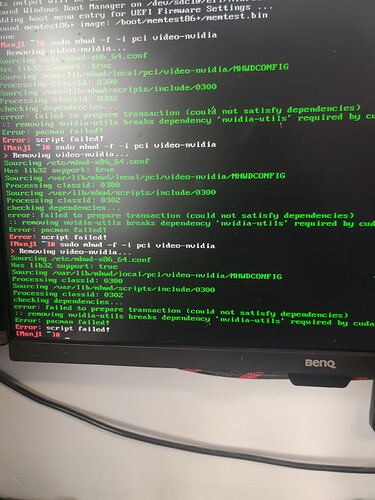 you need to uninstall cuda

you can reinstall it afterwards

Thank you very much, both Bodgan and Person. Boot worked with 5.16 using the commands in tty, and making sure to remove cuda. I will mark this as solved.

@rubiksolver007 feel free to reinstall cuda, it’s an optional dependency for blender to speed up render times on your GPU (at least that’s why it’s installed on my system)
it was probably there for a good reason, just the driver can’t be reinstalled with it present

Already did, it was just crucial to remove it in tty. Thanks