Why are there a ton of hates for Manjaro?

Few months ago I decided to change from Kubuntu to some rolling release distro as I don’t want to do big dist-upgrade and add PPAs all over again each time. I tried Tumbleweed, Fedora, Garuda, Manjaro and honestly Manjaro simply stands out. My laptop temp is way cooler on Manjaro, on Tumbleweed and Garuda it’s hot as hell. On Fedora I just don’t feel familiar. Also I prefer pacman to zypper and dnf. Actually, things seem good, I even installed Manjaro on my production PC. But since then I see a lot of hate on Reddit about Manjaro. It’s not just a few people, but like a ton of them

For me as a normal linux user, I can’t use Arch or any similar like EndeavourOS, Arco, because I can’t stand broken updates like the recent GRUB. And there are basically no other options than Manjaro doing delayed update AFAIK. Any ideas on why and how can we ease the hate?

You’ll always get hate, naysayers with any- and everything. That’s a fact of life and we don’t have to like it for it to be true.

Best is to find out personally with something like this. If you can’t keep an open mind and decidefor yourself , then I don’t think even Linux would make you happy.

Human Nature AFAIK.
Some people just like to go against the flow for no good reason. I do not doubt that some had genuine problems, possibly due to ignorance and inexperience etc.
I,m no terminal junkie and have never run into serious show stopping problems in many years as a Manjaro user.
Windows users also have problems and condemn Windows on a regular basis.

Complaining, being negative is human nature.

Yeah as I mentioned I tried several options and picked Manjaro, so there is no reason to change. Also I don’t see any other good option for me to change. No technical issues with me. The thing is I see a lot of unreasonable hate for Manjaro, which I haven’t seen in any other distro. It won’t be good for the reputation and new users. I even see a guy commented in the link that, he’s on Manjaro, the system is perfectly fine, but still considering other options as he feels Manjaro may break in the future after reading posts like those

Manjaro isn’t perfect, I’ll admit. (*Neither are any distros or desktop environments.) However, I’ve used Arch Linux before Manjaro. While I was able to hold my own, it has “broken” for me more than I’ve experienced with Manjaro. The breaks in workflow are by the very nature of its philosophy being to deliver the “latest upstream software immediately when available”. Constant updates. CONSTANT.

* Except KDE. It’s pefect, has no bugs, and every new feature is super useful.

Manjaro may break in the future

Any distro will break is it’s not being looked after.

Some of it is from the arch elitists who think no one should use arch based distros unless they install the arch way. Some of it is because the devs have thier own ideas which not everyone agrees with.

What is more surprising there, is that words and definitions have no meaning anymore:

“Shipping” - in the software sense means to deliver it to the customer.

There was no customer to get an unusable kernel from Manjaro. There was an alpha ISO posted publicly for those that would want to test and give feedback. That kernel was NOT unusable because was working on the machine that was installed and tested. That is not against any FOSS conduit. Of course those tests of that ISO should be done based on the disclaimer present in the accompanying README.

On the https://dont-ship.it/ usually used by some keyboard warriors to make a point, they start by:

Please do not ship work in progress to users

explaining their thought process about that, etc., but then they also say:

However, if an end user is informed and wants to test patches without broadly distributing them to others, that’s fine with us.

Users/testers did get informed in the README, the link to ISO was posted on tweeter and got downloaded 200 from what i know. No issue there, as we did just that … so, by their own writing: that’s fine
Is it or is not?
Nobody came back complaining of broken devices, yet we all had to witness that Anticipatory Anxiety display from the outside …

My laptop temp is way cooler on Manjaro,

…good to hear, be happy. This should give you pause for thought as to whether all this is true.

I even installed Manjaro on my production PC

…for produktion, I would prefer static release.

But since then I see a lot of hate on Reddit about Manjaro.

…refer to my first answer.
The arch community in general is very elitist and toxic. All this has happened years ago, with the decision to become a company (very,very simplified). Led by an ex moderator, a whole flock of sheep has migrated and is spreading hate now on manjaro (again, very, very simplified).
To give honor to the other side as well: Nothing comes from nothing.
A special derivate I call only “hate os”, and that’s a shame, because I actually would have liked it.

Any ideas on why and how can we ease the hate?

The child has already fallen into the well.
So step aside, let it work, test it, draw your own conclusions.

Any ideas on why and how we can ease the hate?

The point is we have not to do this. We will always hate or love some- and anything and not to all the rationality is matter. Our best is to just ignore it by having our own opinion.

Haters gotta Hate! You cant please everyone. That being said Manjaro has a feature few of the other rolling release distro’s have, a stable version.
I have ran most of the major distros, except Slackware, in my 17 years of running Linux full time. I have tried Arch numerous times in the past. The longest any install lasted before being fubar’d was 6 months. It seemed I was fixing bugs more than using the computer. Some people might have other experiences, but that was mine.
Manjaro has run surprisingly well for over two years. I have had a few minor issues that I was able to fix. No distro is perfect. But I doubt I will move away from Manjaro.

Well, since most of them do not tell which distro they currently use, the discussion of which part of Manjaro failed at them and thus causing their hate is a bit …difficult.

I will not be suprised when some of the haters just hate Manjaro due the hearsays they have caught up instead of installef and experienced Manjaro on their own.

Just like @winnie said, Manjaro is not perfect. My 2+ years experience with Manjaro is a “bumpy” ride. But like @goingtosleep I’ve tried and used various distros before. And Manjaro fits my situation better than the distros I’ve used in the past.

Never listen to Critics (a person who judges the merits of…) no matter what they say, good, bad or indifferent.

Find out for yourself.

The ONLY opinion that matters is yours.

In the past i found redit to be full of Trolls, so I no longer bother going there. I have more interesting stuff to read.

I cannot comment on the motivation for hate - but one could get the thought that those haters are technological newbies - which expect a Linux distribution to flawless.

Ignore them and get on with your life - never waste time on rumours and never place any OOB trust into something you read on the internet - no matter how many times a false statement is made it will never be true.

A lot of people without the ability to look inside or around the statement - it’s like - if a lot of people say/mena it - it must be true - NO it is not always true - and you need to make your own research - not just believe a bunch loud-mouths on the internet.

Never listen to Critics (a person who judges the merits of…) no matter what they say, good, bad or indifferent.

I teach my sons to “always ignore what other people say” and think for themselves.

For me, Manjaro was the breaking point to remove Windows from my all of my systems. I maintain a Laptop with W11, only for firmware updates, etc, which are not supported under most distros.

I have tried so many distros throughout the years, cause I always wanted to move away from Windows, but none was providing me all the features I need, easy and quick like Manjaro did. I keep trying other distros on my secondary PCs, but none has come close to the experience I am having with Manjaro.

Probably because it became more popular than Arch, which it is based on.

I often heard that Manjaro is bad because of expired SSL certificates on the website.
Even tho it’s a valid criticism, it doesn’t have an influence in using the OS and doesn’t imply Manjaro being bad and yet, they (the critics) keep saying this.

Even Microsoft had SSL certs expire on multiple occasions:

Other Big Corporations have this exact issue, yet nobody cares after 1-2 weeks after it was fixed, in contrast the critics of Manjaro seem to really exaggerate. (Just my personal opinion)

I would argue that manjaro could use a social media manager (yes, that’s a thing). 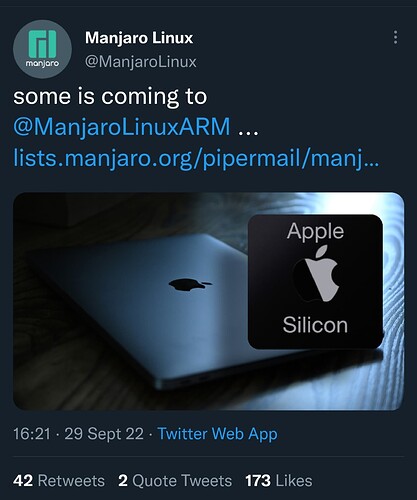 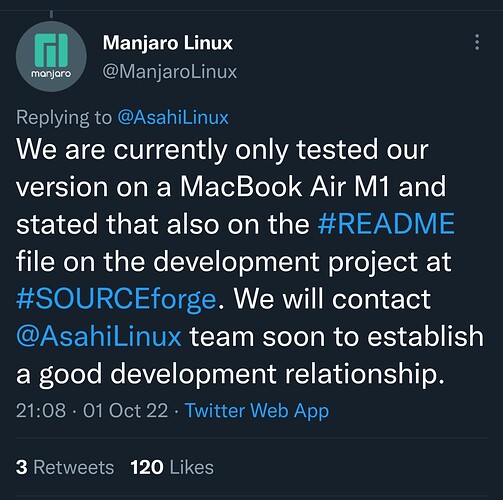 If you can not beat the message blame the messenger.

Manjaro is a great distro that is becoming more popular. It gives you the latest version of everything in a stable manner. This is everyone’s dream for a distro. It is stable because being a couple of weeks behind arch the arch community highlights any major issues.

It is the latest version because it is a couple of weeks behind arch rather than the 6 months to 1 year of the “stable distros”.

It is stable because people do not need hack around with PPE’s and other changes to get the latest version of something because their distro does not have it, and this means that it upgrades every time. My “stable” distros like UBUNTU would die on upgrades either using the 6 monthly or even worse the LTS version where during the time waiting for the LTS the number of things I had changed meant that the LTS barfed everytime. It was generally fixable, but always a bunch of stress.

I am lazy and a little paranoid, I ran Manjaro for a year on a spare machine before moving over. I have now been running between 2 and 3 desktops and a couple of laptops on Manjaro with out issues for 4 years.

It is definitely more stable than the static distros.
It is much more up to date.
And requires the minimum of effort.

This means that there are people that want to throw FUD at it. The hate is a reasonable sign that it is better than whatever the haters are promoting.

My journey started with slackware, redhat and BSD. At that time BSD was better solid - really really solid and with a great set of software via ports, so I tried Gentoo… BSD is still great, and OPENBSD is a really nice project for firewalls etc. Ubuntu created an easy to use desktop, and I moved to xubuntu when UNITY failed.

For linux desktops it is Manjaro for me. I just want something that works with minimum effort.