Vs code problem in manjaro

I just hopped to manjaro few days ago, and had so work with coding. So, i just installed vs code. When i try to run header files like conio.h, 2 error messages #include errors detected and cannot open source file conio.h occur. So, plz help

Please provide the errors. Nobody here can guess what your issue is. Make sure to follow How to provide good information

Did you read the provided link?

Just reading about conio.h … it seems:

That leads to here 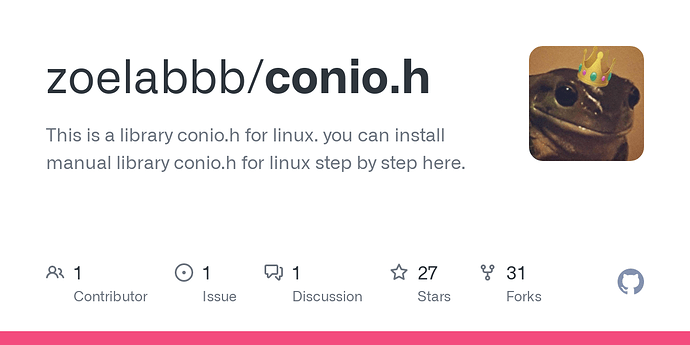 https://imgur.com/T3t4QTq
After installing as you said, I am still getting error for functions like getch(), strrev. Please help

I’m not much of a programmer and I haven’t used C/C++ for quite a while, however:

All mentions of conio.h refer to the linux version linked above. (I’ve not seen any other)

Why are you creating another thread?

Neither the distribution nor vscode is to blame here.
A simple search with the internet search engine of you choice gives you the answer right away.
You’re better off on a C programming forum with your questions.

What’s your “book”? Is it vscode terminology, because I don’t use vscode.

The code you’ve shown us is a complete program (from a basic tutorial that doesn’t work on linux) which doesn’t use or even include conio.h bruh…

hello, m from Nepal. I do’nt know, but all the programs in my book have conio.h header.
About VS code, its nothing but my obsession to use it coz back in windows i was familiar with it.
Apart from those queries, i have small request to ask. Since I am very new to this interface, would you mind suggesting me any sort of reference(yt channel, forum pg or website) for getting a better idea on the file system, types, properties, basic terminal code structures and so on?
Thank You