UUID does not change after grub reinstall

Because I used manjaro encryption it used 2 encryption partitions instead of ‘crypt on lvm’ as ubuntu does.

I deleted the cryptswap to enlarge my main partition and then recreated the swap.

I found all the UID-s using:

And replace the UIDs to my new UID.

During boot it still tries to use the old UUID for the LUKS encrypted swap. What should I do?

Hello,
Check your /etc/fstab and modify it accordingly.

The thing is I have changed it.

As I said, I grepped the old UID from all of /etc folder.

As I said, I grepped the old UID from all of /etc folder.

If is a different HDD or SSD it will have a different UUID. You can’t use “the old one”.
https://wiki.archlinux.org/title/persistent_block_device_naming

Yes you can use the old one.

As I said, I am using the same UUID for EFI partition and ROOT partition, but my swap has a new UUID that I have implemented in the configuration, but during boot it still tries to look for the old UUID, as if some files during grub updating/install are not overwritten.

Yes you can use the old one.

So you assigned the old one via tune2fs and you made sure you also got the correct UUID of your swap, changed the files and you run
sudo update-grub
Rebooted and … ?
You only have to grub-install once, before grub-update

The old UUID-s are for 1. ESP partition 2. root partition

The swap partition has a new UUID.

After creating the new encrypted swap partition I changed all the old swap UUID-s to the new one and ran update-grub.

During booting, it says that it can’t find a disk with UUID of the old one, but the resume defined in /etc/default/grub has the new UUID. Somewhere there is something that stores the old UUID of the swap partition and it tries to use that.

After this I rebooted and now it shows that there is no key associated. 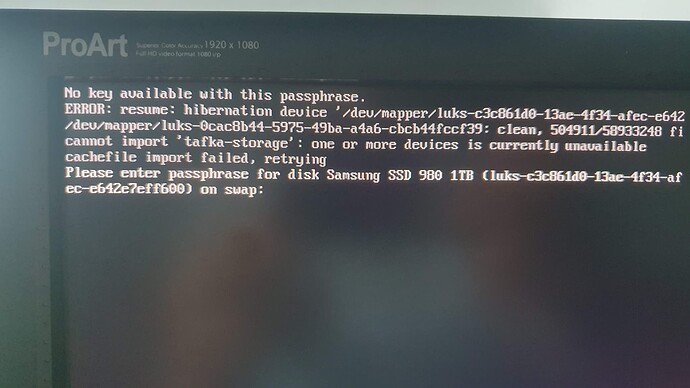 Did rebuild the initrd as well?

Why does the installer add a paswordless key to LUKS-encrypted partition? Support

I’ve recently installed Manjaro Gnome and used “encrypt this partition” option during installation. I then switched to systemd-boot in order to speed up boot time (the grub one is slow at decrypting the partition). When I switched to systemd-boot, I’ve discovered that the computer boots properly without prompting for a decryption password. Using sudo cryptsetup luksDump /dev/sda2 I’ve realized that there are two keys attached to my main partition - apparently one was passwordless. This means …

I got inspiration from this.

Turns out the encrypted swap i made defaulted to luks2.