On reboot, my system hangs and I have to force a reboot or a power off.
I believe I have found the same problem and possible answer to a reboot problem I have in another post:

Continuing the discussion from Timed out waiting for device disk/by-uuid/:

I have checked fstab and blkid. except I don’t know exactly how to correct the problem. Is it possible to ask for a bit more instruction? I didn’t want to just jump in and mess something up further.

If it helps, I could paste the entire fstab and blkid output. Thank you for any help!

comment the line starting with the offending device uuid e.g. from

and save the file

Does it happen at boot or at shutdown?

It happens at shutdown and occasionally at boot it hangs on the splash until I force another reboot.

Which I commented to
/dev/disk/by-#uuid/

Attached also is the screen I see when trying to shutdown or reboot. 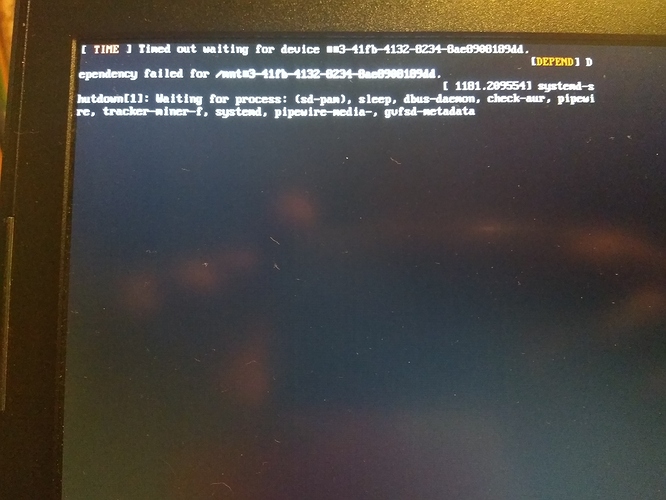 Would it be an external drive?

No, I have an SSD and a secondary HDD.

Which I commented to
/dev/disk/by-#uuid/

by the way, I’m having the same problem and commenting the line didn’t solve it. Let me know if you have any updates on the issue. Thanks.