Stuck on No irq handler for vector

I ran my updates. It updated several of my kernels. 5.10 gives me this screen. 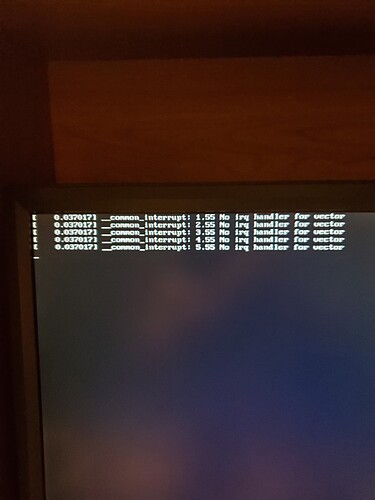 The other kernels give me the failed to load kernel modules message.

There’s no way to be sure yet, but I suspect you might have one or more EOL kernels installed.

If I’m not booting into the EOL kernel does it still affect the other kernels?

I’m unsure, but it is possible.

The more I think about it, the more I don’t think so. Especially as you are seeing different errors between 5.10 and the rest.

But I am unsure. IMHO it’d be best to still chroot then uninstall all kernels and then just reinstall 5.10 and another one if you want, 5.15 maybe. But I’m thinking that’s just me.

I can get to another ttyl so I am installing 5.15 to see if it can get me into my system.

That’s why I recommended booting with live media, entering a chroot environment, and removing/installing the kernels from there.

5.15 is doing the same thing. Is there a list some where of the EOL kernels?

I can confirm it’s not something going on with Plasma because gnome won’t give me the log in screen either.

To get a list of the other kernels installed, run:

P.S.: I’m sort of out of my depth here and mostly guessing. Thus:

I still recommend removing them and installing from “scratch”, as I explained earlier.

Update-grub is still adding 5.7 to the grub menu along with 5.9

Thanks for trying to help with this.

The headers for the 419 kernel were missing. I reinstalled those. All of my kernels but one are stuck at the same screen. The other is giving me this error:

If you can get to a tty please share system info … such as from here:
How to provide good information
but you can make it easier by using something like this as well:
[HowTo] use public command-line pastebin services without installing anything!

Which would mean do this and share the link:

It looks like you have the nvidia-390 driver installed with an unsupported GPU ?

So which driver should I be using

It looks like the only drivers available are the 390xx and 470xx. I’ve always used the 390xx but according to you and from what I read it doesn’t support my card. So what am I supposed to use?