I also had this issue now, and following arch wiki fixed it KDE - ArchWiki

(removing ~/.config/plasma-localerc using zsh as shell in konsole, logging out from desktop & logging back in)

Had an issue with mouse clicks on multiple virtual screens in Virtualbox 7.0.2 with Win10 guest after update. Seems like something to do with Nvidia drivers since there were older posts with the same issue on other versions: quick workaround is to disable extra displays in the guest, fix seems to be switching pointing device type from USB tablet to PS/2 mouse in VM settings.

After update manjaro icon got changed. 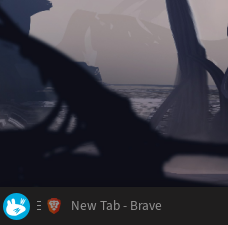 That’s actually Xfce’s default icon.
You can try setting Manjaro’s icon back from the launcher properties.

Hello, I am experiencing a KDE Plasma issue after some time using the computer. All the activities becomes mixed up, the apps still work, but their windows stay freezed, so it is not possible to properly see, change programas. The only thing I am quite able to do is to switch to Ctrl+Alt+F2 and reboot. So I can work for a few more hours before it happens again.

UPDATE: I had replaced plasma with the local 5.24.7 version, but the issue was still happening. So I updated back to 5.26.2. Not sure exactly the issue relies, but it started after this Stable Update 2022-11-02.

I answered the poll…

“No issue, everything went smoothly”

Apparently, I tripped over an audio cable in my rush to make a dramatic exit. Looks like the joke’s on me in the near future…

However, as @philm pointed out, when the next update to the KDE Frameworks comes around, the 5.24.7 packages will need to be rebuilt against that, and especially so kwin. So unless someone is willing to maintain the LTS packages, we’ll eventually have to migrate to 5.26.

I want to formally apologize to anyone whom I may have insulted with my immature hit-and-run mic drop moment. My pride hurts like hot coals against my face.

(removing ~/.config/plasma-localerc using zsh as shell in konsole, logging out from desktop & logging back in)

Thank you so much Zeitt, you fixed the problem for me

I just renamed the file for backup case (but wasnt needed) and restarted the OS.

I was remembering the zsh change, few month ago… where i had to changed the Terminal Setting to old school Bash again.
And i have to say, its not needed to revert it to zsh… locale issue is gone and the Terminal is working with Bash again.

My only issue was with Virtualbox. The new notification panel appeared momentarily with some error message regarding adding the user to vboxusers. Logging out and back in did not resolve the issue, removing & reinstalling Virtualbox also did not resolve the issue. So the last resort was to detach the virtual disk and attach it to a new vm installation as a second drive to get access to any files left behind.

so boot on USB live iso ,
open a terminal

After last update my dual display configuration doesn’t work anymore on KDE.
Dual screen is fine at boot but the main monitor (DP-0) stop working after login and the second one HDMI-0 (DELL U2415) becomes the only one active.

In KDE control panel (System Settings/Display and Monitor) I see my DP-0 monitor (AUS PA278QV) that appears and disappears every few seconds but I can’t enable it.

In /var/log/Xorg.0.log I noticed many connection’s attempts:

Can you help me, please?

you are not the only one, there are others affected with the same multimonitor setup issue…
you can delete/rename the kscreen folder in your $HOME/.local/share, then reboot and see if it helped

I updated my desktop system from a command line environment using pamac upgrade --force-refresh --no-aur, there was only brave-bin to update from the AUR.

On trying to boot the system with the updated kernel 6.0.6-1 the following message was displayed:

and the system failed to boot.
Correction: I discovered the system does boot, but no graphical environment, I am able to switch to a command line environment with Ctrl+Alt+F1…F6.

After Ctrl+Alt+Del to reboot the system I was able to boot to a normally running system with the 5.15 kernel. Running pamac upgrade --force-refresh displayed a warning message:

which may be a clue to the above [FAILED] message?

I have yet to do an in depth search of the internet where I may find a solution to the problem though any hints are welcome in the meantime.

so everyhting is working on the 5.15 kernel?
maybe the nvidia drivers dont work properly on the 6.0 kernel…
were you on testing/unstable branch?

so everything is working on the 5.15 kernel?
:
were you on testing/unstable branch?

Appears to be so far, though I have not been using it for long. I am on the Stable branch, I am not so advanced as to risk or need testing/unstable.

maybe the nvidia drivers dont work properly on the 6.0 kernel…

I’ve yet to find out.

there are issues with the 470xx drivers on kernel 6.0, so it could be the case also for the 390 version… since you are on stable, this indicates, that there was a downgrade:

you can ‘fix’ it with:
sudo pacman -Syuu

you can ‘fix’ it with:
sudo pacman -Syuu

Unfortunately running that command, which did downgrade the driver, has not helped

Note I have added a correction to my original message, that I discovered the system does boot and I am able to switch to a command line environment.

lib32-polkit is now a AUR Package.

Is it safe to uninstall?