A post was split to a new topic: Errors after update

For all of you having black screen with AMD GPU with kernel 5.10

Hope this helps!
It is a bug in the latest AMD drivers…

Try again from a command line:

Kernel 4.14, Xfce.
All fine: I had to do the usual system maintenances to check pac files and rebuild AUR packages; however, now in the journal logs, I see a new warning:
systemd[1004]: -.slice: Failed to migrate controller cgroups from /user.slice/user-1000.slice/user@1000.service, ignoring: Permission denied

I will try and report back.
EDIT:
Yes: I needed to add systemd.unified_cgroup_hierarchy=true to grub to get rid of such error, but I’d like to know if it is ok.

Kernel 4.14, Xfce DE. After the today’s update [Stable Update] 2020-12-30 - Kernels, KDE, Cinnamon, LibreOffice, Python 3.9, Mesa 20.3.1 which also included systemd 247 (247.2-1) in the journal logs, I see a new error/warning: systemd[1004]: -.slice: Failed to migrate controller cgroups from /user.slice/user-1000.slice/user@1000.service, ignoring: Permission denied After a quick research seems that to get rid of this error is needed this Grub parameter: systemd.unified_cgroup_hierarchy=true …

Oh, thanks, but already updated… Wouldn’t even be able to run this, as pamac partially uninstalled itself for some reasons…

But sweet, all issues are fixed for me, now!!

Your theme is not compatible any more… Try another one…

Do I get that corrrectly: Commenting out that grub line would prevent the warning to appear, but also prevent the usage of systemd-fsck?
So I can ignore this warning?

It is a bug in the latest AMD drivers

Editing that into the known issues right now.
Edited in (with some minor modifications)

I am happy to say everything works sweetly!!

The AMD GPU driver did not work, but with the fabulous help of @The_Quantum_Alpha, it is up and running!!

Thank you for Manjaro updates

Do NOT do that. Whatever AUR package you ran that produced that error needs to be rebuilt.

I had a small issue, the bpython interpreter got uninstalled for some reasons, so I tried to reinstall it, there was a few file conflicts but removing them was enough to solve it, everything is back to normal now.

Also there is something I find weird :
I had nvidia 450 driver installed so far, and when I run mhwd -l, it’s not listed anymore in the avaiable drivers, which means it should have been uninstalled, but nvidia-smi tells me that 450 is still here, I also did a short test with pytorch and everything works fine, any explanation ?

@Fabby Thanks, that helps me

take a full system backup , go to a console using Ctrl+Alt+F2 and:

(I’m in the same situation here: need to go to Nouveau as I’m on a GTX 1070 and that should be supported now but too tired to try now)

I got the following error: 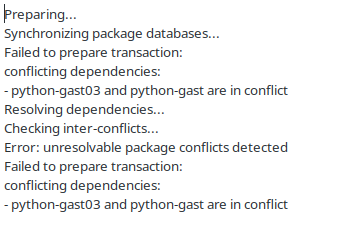