I had to take a photo with my phone because… well, I can’t take screenshots, obviously ;-). 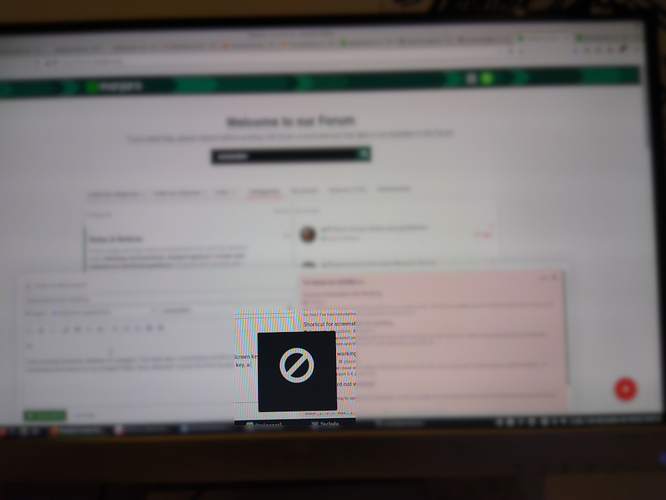 Hi,
I don’t have a solution, but this might be related to my problem, see my post in the same forum…

If you have multimedia-keys on your keyboard, could you try pressing the play/pause button and see if that takes a screenshot?

Edit: I have the same issue as you, the print screen key just gives me the “not allowed” symbol.

I don’t have any multimedia keys…

After update i have same problem.I reinstalled system first there was no problem than i update system problem came again.
Help please i need screenshot.

Hi, a had the same problem and installed screenshot

Which screenshot app did you install and work with shortcut?

In the AUR is an app called Ksnip, install it and see what happens. I have many personal pc’s and laptops using my version of Cinnamon and have not had any issues, but then again I have Ksnip installed on all of them.

There is cinnamon screenshot app at system before update it was working very well.But update was about cinnamon and problem came after it.I hope it will fix a simple update.

Wait, have you checked the keyboard shortcut to see what it has been assigned to?

I saw some applets reports after update at forum.

Hoping a fix will come out soon.

My Print Screen key also is out of order since the 4.8.0 upgrade. Need this, so my workaround for now was to use the screenshot app that I already had installed (Gnome) and ad it to my panel. So now I can right click on it to make screen-shoots and choose screen or window.

Edit: Panel right click choice Window does not work for me, just grabs full screen with the panel menu so I probably will use it differently.

Pantheon-screenshot is working fine on the latest cinnamon update

Thanks, works very well and also with more features too

Seems there is a udev issue, reinstalling the three packages should fix it:
sudo pacman -S systemd systemd-libs libgudev

Re installing those packages doesn’t have any effect on my system.

I ended up making a custom keyboard shortcut, named it Screenshot, and pointed to /bin/gnome-screenshot (to the shared library)
After that give it a keybinding you like, i used printscn button.

Only issue remain is that the playbutton does do the same, so i removed all keybindings from the play button, i don’t use that.

See this thread, it’s all related: Multimedia keys on keyboard in cinnamon stopped working after Update

So, it’s basically about waiting for someone to fix it for us?