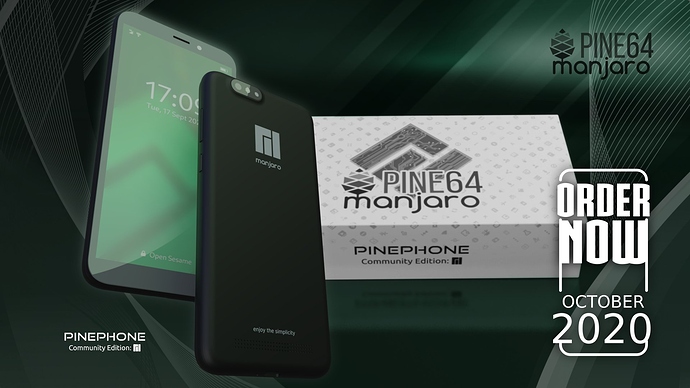 Manjaro has offered support for PINE64 devices since the very beginning – with high-quality OS builds now available for nearly all of Pine64 SBCs and devices – and the PinePhone is no exception in this regard. This community edition will ship in a custom presentation box designed by Manjaro’s artwork team, and the PinePhone itself will feature a sleek-looking Manjaro logo on the back-cover. This PinePhone CE will be available in two hardware configurations: 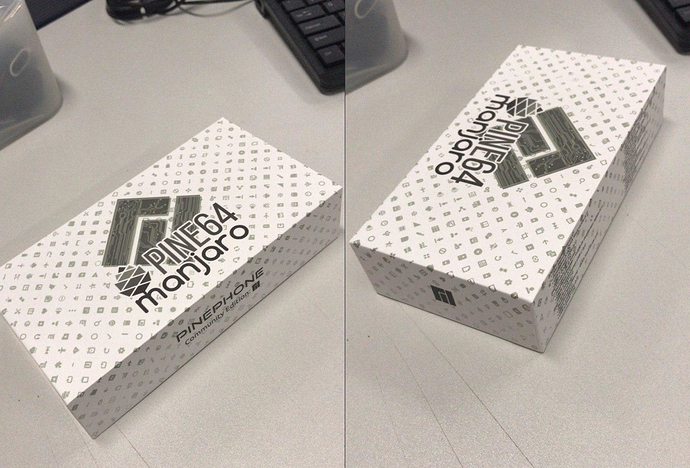 The Manjaro PinePhone CE OS image, which will ship with the upcoming PinePhones, was sent to the factory just the other day. Personally, we feel that this is the most end-user ready OS image to ship on the PinePhone thus far. The OS image ships with Phosh and is probably the smoothest experience on the PinePhone to date. It features a solid variety of well-tuned applications to get you started, including Firefox, GNOME Maps and Megapixels camera application, just to mention a few. Don’t get us wrong, the software will still require a layer of polish to be considered ‘daily-driver’ worthy by a broader audience, but we have been running it exclusively on our phones for weeks and it has been a great experience so far.

You can still pre-order it now.

Hey, got my PinePhone a couple of days ago. Very cool!
I did get a screen protector and case.
The convergence dongle is fine, but I have no HDMI output. Any help there?

Thanks a bunch for all!
-Ken (dot) Dickey (at) Whidbey (dot) COM

Where do you want bug reports and complaints? My phone arrived last night, and already my second-biggest frustration is that none of the groups working on PinePhone-compatible systems are communicating where they develop and where they interact with users.

(My biggest frustration is that Plasma doesn’t work, but that’s why you sent it with Phosh!)

Found the bugtracker under the main thread about the distro release. Might be good to link that here. I tried, just now, in this reply, but the forum rules don’t allow me to post links, so.

Don’t you think the pinephone is already outdated ? When compared with traditional smartphones, the specifications of the pinephone are below what you find on the market for more or less the same price. Don’t you think it would be more interesting for the Manjaro edition (for smartphones) to be available on smarphones available on the traditional market (Samsung, Huawei, …)? Anyway it’s just my opinion.

Don’t you think the pinephone is already outdated ?

No. Android requires a lot more than Linux does–especially with Google services.

Don’t you think the pinephone is already outdated ?

No. Android requires a lot more than Linux does–especially with Google services.

I saw some smartphones at more or less as the same price, and the specifications are better than the pinephone (for example: octo-core, better camera (48mp, 13mp, 8mp), dual nano-sim, fingerprint reader, …). I know that the pinephone is 100% compatible Gnu/linux but if we talk about specifications, for me, pinephone is outdated. That’s why I think that the better solution would be to porting Gnu/Linux smartphone distributions to market smartphone. But Google is in the place and it is difficult to change this fact. But it shouldn’t be impossible to change that in the futur.

I understand. I wasn’t complaining. I’m suggesting that someone who currently has the ability to link to the bugtracker should do so. That way we won’t have to do exactly what I’m doing now, which is spamming this thread with discussion about where to discuss the phone

The phone is not about the hardware: It’s about the cutting edge software and the freedom it brings. I had one of the first 100 Ubuntu phones in

way back and compared to the market it was also undersized, but running Ubuntu, it was much snappier than any Android phone I’d used before.

I didn’t get the Pinephone because I need dual-SIM, but you don’t hear me bitch and whine about it so we’ll both have to wait for the second generation and by buying this hardware we’re indirectly sponsoring Manjaro development…