If i switch Intel GPU to NVIDIA GPU, i will usually stuck on this screen. Successfully entering into the system is random, i never know if will be success or fail.
How to fix, please? 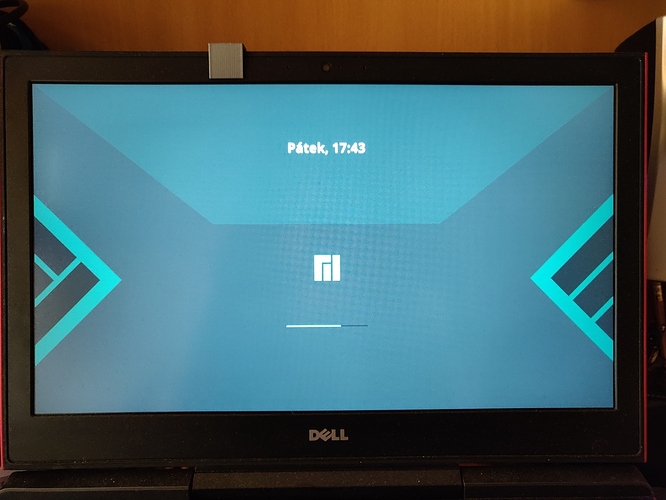 Are you sure optimus-manager has been implemented properly?
(check the project page here: GitHub - Askannz/optimus-manager: A Linux program to handle GPU switching on Optimus laptops. )
Is there a reason you need to use optimus manager as opposed to the regular just PRIME switchable graphics?

I know about prime-run command, but app will start with intel GPU, this is a reason why i use optimus manager.

Well yeah … theres no reason for your desktop, text editor, etc to use the nvidia. Its just a waste of power.
You invoke it when you need it such as for steam games or blender or something. No restart required.
But if you want to use optimus manager and its not working … all I can suggest is to double-check the configuration.
You can also probably get logs from the failed sessions to figure out whats wrong.

I Have the same notebook and installed the ’ optimus-manager’ in Hybrid mode. I start Applications and Games with this command:

I Have the same notebook and installed the ’ optimus-manager’ in Hybrid mode.

Then whats the point?
Thats exactly how things would run without optimus-manager.
Except prime-run has a little extra magic besides your env vars…

Is that in response to my post?
Is it related, or the same issue, or ? …
Optimus-manager attempts to forcibly set ‘only intel’, ‘only nvidia’, or ‘hybrid’ in between restarts.
The ‘hybrid’ method you are using should be the same as a regular system without optimus-manager … but I cant guess at how OM mangled it.

As far as I know that wont be an option at all … cuz … its an nvidia application that only handles nvidias.

If you are using PRIME … then everything is using the intel until you tell it otherwise such as by using prime-run … then its using the nvidia (for that application).

You completely alright. I made some tests and with your command i confirmed. Optimus-manager is not needed. It’s a redundant procedure.

is better than prime-run, it’s correct?

I dont think so.
prime-run is shorter … and is really just an alias for the same command with this added:

(which wont hurt anything, but is helpful if you use vulkan)

So again … no point in not just using prime-run

NOTE … I should mention that some people who really use their machine 2 different ways at different times. Usually meaning that its a laptop to conserve power most of the time but every now and then you use it for gaming. And of those systems some are likely to get noticeable improvement in battery life if they use optimus-manager to fully shut down one card or the other between uses.

Well, but if i want to run games from Steam. How to use prime-run? I readed wiki, but it didn’t help.

Well, but if i want to run games from Steam. How to use prime-run ? I readed wiki, but it didn’t help.

The very easiest way is to use lutris to launch steam and you can toggle prime on as well as gamemode. If you are doing it in steam then open launch options and type prime-run %command % and save it in the launch options

If you are using something like optimus-manager then I dont think prime-run will work unless you are in hybrid mode.

The above method for steam is how it should work. If it doesnt … there is something wrong.
And it is covered in the wiki:
https://wiki.manjaro.org/index.php?title=Configure_Graphics_Cards#PRIME_GPU_offloading

For example, in Steam, select a game - that you want to run using your discrete Nvidia card - from the Library page of the Steam client, right-click, and select Properties. Click the SET LAUNCH OPTIONS… button and specify for the command line options followed by the default launch hook %command%.

If i use hybrid mode, prime-run works, but lower performance. If i switched to nvidia gpu by use optimus-manager, I have 93fps in the Trackmania benchmark and with prime-run i have 83fps.

I must accept slightly raw performance drop if i want to use prime-run, right?

Not usually. But it might be down to configuration.

I also use Lutris to launch my games. Different laptop, but same type of hybrid graphics with the Intel / Nvidia RTX2060 mix.

For me, I launch everything via lutris for games… to simplify my life, i set the environment variables in the Lutris global configuration:

It works well with Steam, GOG Galaxy, Epic Games Store, and many others. I even have the classic i enjoyed so many years ago working “Total Annihilation” (bought from GOG)