My laptop doesn't want to start any os

I have a ASUS TUF gaming laptop with RTX 2060 and ryzen 7 4600H, I have windows and Manjaro on it, i have been using it for a month without any problems, but today i have restarted it to change the os from Manjaro to windows, some thing i have done millions of times before, i wasn’t in front of the computer for a couple of seconds and then i was treated with a frozen Asus logo, then i have turned it off and on, after that i have chosen to boot Manjaro, but unlike normally when it was booting it has shown me that 3 processes have failed (I don’t remember the names) and that to proceed i have to click Ctrl+d, i have done so and it looked like normal Manjaro, but I wasn’t connected to the internet and it showed that network menager wasn’t working so i have decided to restart it again and this time to boot up windows but that didn’t work too, after that i have tried to boot up Manjaro again but now it shows this and I can’t do anything, even turn off the laptop 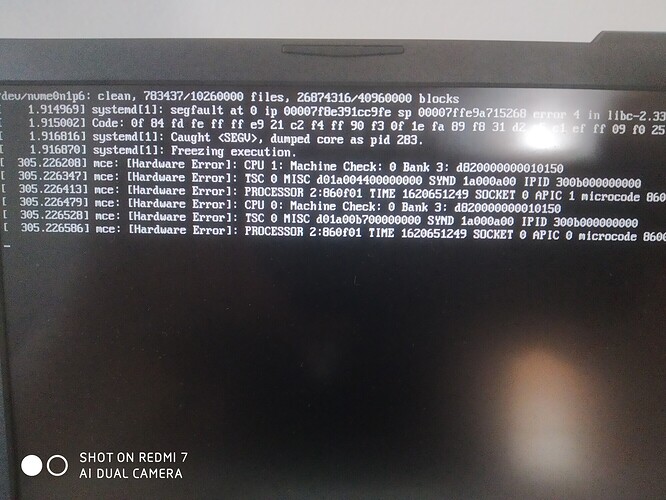 Yeah that looks like some kind of hardware error, especially given the erratic behaviour of the machine you described.
You might be able to diagnose it further with a live ISO. If that does not start the problem is likely with the system memory, the cpu itself or the voltage regulation for either.
If you are able to you might also be able to diagnose it further by slightly (~0.05V) increasing the voltage for the CPU/RAM, though laptops only rarely give such options.

Hello, So, Everytime I startup my laptop, the following message shows for a few seconds and then I see the login screen as usual. The message doesn’t cause any problems except for time delay of approximately 10-15 seconds on EVERY STARTUP. What does it say or is there any way to fix it? I run Manjaro Linux on my Dell Inspiron laptop as the ONLY OS on the machine. [IMG_20200829_172235]