I initially posted this as a comment under the stable update release post, but I didn’t get any response and I myself couldn’t manage to fix it either. So I’m opening a dedicated post for it.

The update which was released on 2021-07-28 broke my monitors in a bad and weird way. (detailed info of the versions at the bottom of the post).

Here is my monitor arrangement before this update: 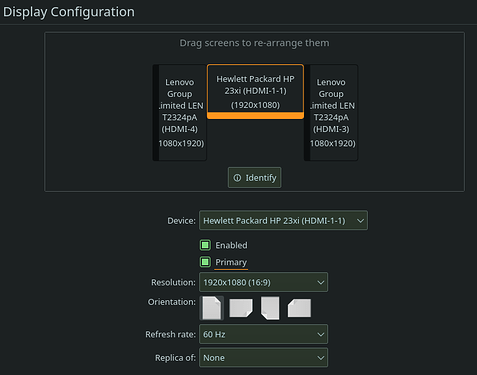 The two vertical ones on the side are connected to Nvidea card via HDMI and the middle on is connected to on-board DVI port of motherboard.

When I rebooted the computer, the SDDM loaded and I had all monitors in the landscape, the left monitor was now on the right side of the middle monitor and the right monitor was a mirror of the middle one (primary)! The KDE panel was gone in the primary monitor, all the desktop wallpapers were changed to something (in both Plasma and SDDM). When I make the middle monitor primary via settings window, the KDE panel fills only half of the screen and it does not respond to left-click what so ever (the correct background is always only shown above the KDE panel which in case of this screenshot is the purple one!!):

I have rebooted multiple times and nothing got better. I booted into AwesomeWM and everything worked except the monitor arrangement which was behaving similar to SDDM.

Also the numlock status has been reset to default (off).

It seems that this update has badly damaged my SDDM config and my plasma config!

Any suggestion/fix is highly appreciated.

Does Wayland work with 3 monitors?

I use two monitors, they work fine but only the wallpaper of the background was sometimes auto reset after login.

I haven’t try Wayland as some parts of my workflow are X-dependent (dmenu, xclip, …). I’m not sure if I want to mess up with my system and add Wayland to the mix as it might make the debugging harder.

No because in my case SDDM actually works and in their case SDDM doesn’t even show. In my case these are what have been changed in SDDM:

I just installed plasma-wayland-session and plasma-wayland-protocols (from extra repo), rebooted and logged in to Plasma Wayland. Upon logging in, the desktop loads with Plasma panel but with the wrong desktop background for non-primary monitors. then when the “Wallet Manager” tries to confirm my GPG password to open the wallet, the computer becomes unresponsive (mouse seise to work, keyboard become unresponsive, even the numlock and capslock lights cannot be changed, even TTY does not open) and I have no choice but to hold the power button to turn it off.

All that said, it clearly shows that the situation is not Xorg specific as Wayland also shows wrong background and etc.

I then turned off the computer, disconnected the HDMI cable of the left most monitor and turned on the computer. All issues persists in Xorg and Wayland which shows either:

This issue was “fixed” with [Stable Update] 2021-08-09. There are still some issues with KDE but they are not as awful as what I was facing before.

For whoever having this issue, I should say that the screwed up SDDM and desktop wallpapers didn’t get changed to my old settings, but now I can set the middle monitor as primary and still get the full KDE panel at the bottom (previously it was just spanning across half of the middle monitor as depicted in the screenshot in the first post of this thread)

The issue I now have is that when I move a window from Nvidia monitor (e.g the one in the right) and I move it to the intel graphics monitor (the middle one), then the mouse cursor can get too far from the title bar of the window. Basically the movment of the window gets so laggy that it falls behind and cannot keep up with the mouse. The situation can get worse everytime I move the same window from one monitor to another.

A post was split to a new topic: Multi-monitor setup broken after manjaro-kde-settings update

I finally managed to fix this. The issue was/is/will be because of Nvidia driver as the opensource one is still suboptimal/buggy. To fix it: 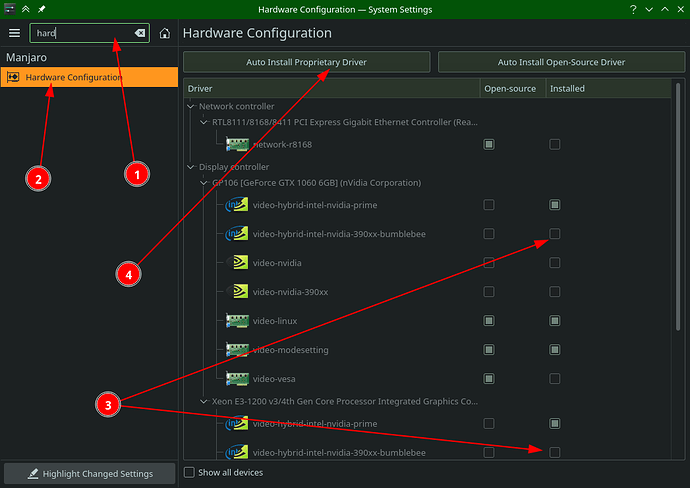