After a little bit of playing around I’ve got Manjaro Arm to install on the eMMC of the Pine64 SOQuartz CM4 module with my DeskPi Super6C carrier board. I’m using the DTS for the soquartz-cm4io at the moment which isn’t an exact match, but gets me far enough to see what Linux makes of the system.

A couple of oddities I wanted to mention. Not sure if these should be bug reports or not so please advise. 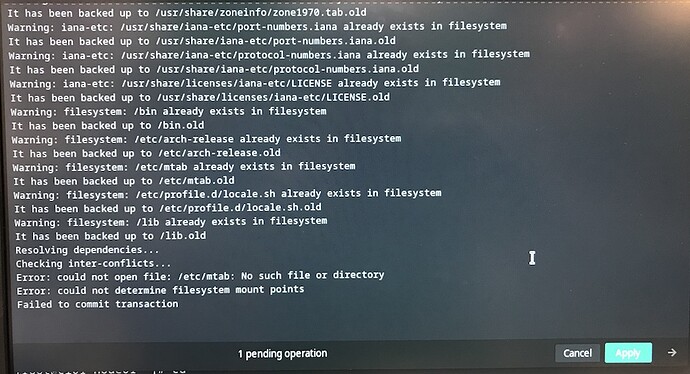 I would have expected checks to be in the OS for both of the above eventualities. Bit strange this happened at all so thought I’d best let someone know it has happened. Entirely possible I’m doing something daft of course. I’m using Manjaro Arm 22.06 xfce.

One more thing, I plan to create my own DTS file for this board based on the limited info I got so far. If there’s any pointers on ‘how to add a dts file to linux’ and then ‘how to ensure a new dts file results in a dtb in the Manjaro u-boot’ I’d be very appreciative. I’ve managed to download the linux-quartz64 manjaro arm repo and build that successfully - I just need to know how to add another ‘supported board’ for my own testing prior to testing, then eventually submitting patches to the Linux Kernel team and the Manjaro Arm team.

I’m documenting my progress on all this here: GitHub - adamfowleruk/deskpi-super6c: A repo to hold useful information and files for my exploration of the DeskPi Super6C CM4 carrier board

The missing folders issue is odd. These folders should already exist on a new install image. So what is the filename of the image you used to flash?
Pretty much all the issues you encountered are because of the missing folders.

Regarding getting your DTS upstreamed, it’s not for the faint of hard. The linux kernel documentation has a good guide on how to do this:
https://www.kernel.org/doc/html/latest/process/submitting-patches.html

Thanks. Exact image is the below (so not the release I thought… Having a brain fart this afternoon, apologies) :
Manjaro-ARM-xfce-soquartz-cm4-20220718.img.xz
from here: Release Dev 20220718 · manjaro-arm/soquartz-cm4-images · GitHub
So a dev release (I was attempting to get all recent patches). It’s the OEM installer. Forgot to mention the installer wouldn’t run either - I didn’t try it after creating the missing folder though… (Similar error message to the other when trying to launch it from the command line).

Hm, looking closer at the build log for this image, it does seem like that image is broken. Not sure what happened there. New images are getting built on monday though.

Hi there @Strit - I’ve just tried the 25th July build for the soquartz-cm4 and that doesn’t even boot any longer. Not even an initial Manjaro logo with Spinner, so there’s definitely something odd going on.

I’ve started creating my own DTS file for the soquartz cm4 module and the DeskPi Super6C carrier board combination. I’ll use the 18th July image for now and compile my own DTB using any info I can find on the currently booting system to help me.