Nothing for me with the graphic tools.

The ‘Search’ function is active. When I install Gvim and push ‘Launch’ : nothing, just a ‘blink’ of the screen.

The icon is visible in the application list, but nothing else than the wallpaper when I select it.

Even with a reboot, Gvim is inactive. Vim is already installed and usable in text mode.
‘pacman -Ql’ show all package’s file. Launched from a console : “No protocol specified” and "E233: cannot open display’.

I’ve read it in the notification when I’ve unlocked the Pinephone. But I am not able to read it with the Chat application.I can’t find a way to open it, I see only the beginning of the sentence.

How to read all the SMS’s text

Keyboard Layout : I’ve loaded some variant of French AZERTY keyboard layouts, but the display is always QWERTY. I can’t find a way to have the AZERTY layout displayed and the accented letters like for the upper line : &é"’(-è_çà)=

But, when I connect a physical French ASCII keyboard, it is well recognised even if QWERTY is displayed.

This night the Pinephone was powered off. This morning, I can read the SMS.

Yesterday, a reboot was done without success.

What’s your output for locale & localectl status in the terminal app?

I have same issue. But if i restarted phosh i could read the SMS. “systemctl restart phosh”

beta is not stable branch at all

this is normal release pattern

pre Alpha or dev
then Beta
then RC
Then Release
the Release should be stable , the pinephone software is still on a very early stage.

Look at the second post in this thread to see what branches the images are based on.

Manjaro and Manjaro-ARM have branches: 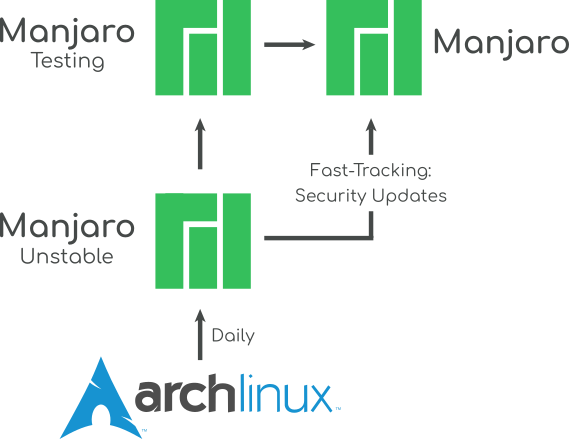 We get packages from Arch and other sources and put them into our unstable branch first. Developers mostly base their test-builds or machines on that branch. We know what we do and know when we break the system.

When we release a release, we always try to base that release on the stable branch, which is done mostly with the images we linked in our first post:

You can verify that by checking /etc/pacman-mirrors.conf

The second post includes our development changelog. Based on the users feedback or changes upstream we will continue to release new images for the phone. It is always best to test updates on a fresh install image. We also change kernels or drop stuff as needed. So when you have the regular first release of the given release, updates might normally come when the development cycle of beta3 finished. Those inbetween releases have additional date-codes in the name and are developer images, we only had briefly tested.

If you can’t wait, you can however switch branches always to get the updates or changes faster.

Think about using a cell modem driver that works. The one you are using now is just half-working.

You may want to check the carriers list first or ask in the Pine64 Forum for further feedback on the topic carriers. I can tell you that my carrier Ja! Mobile just works perfectly fine. Based on T-Mobile Germany network. Regarding modem drivers there are two:

Since we have images available with both drivers, you may test both and give us feedback.

You do things a litle different than other Linux and BSD distributions do.

You might base it on stable branch. but it’s not a product ready to be released as a stable os.

Why do you call it beta if it’s stable?

And why is the beta 2 so unstable?

I hope that you know what you are doing and I am looking forward to see the end product.

The user bought the hardware with Manjaro OS on it. We never said the OS is ready. We are still in the early development state. Phosh is at version 0.5, which is beta stage. It might take another year to get it almost ready. We have tested the applications shipped with the phone briefly and did some basic functionality with it. You can receive calls and send text messages on some carriers.

So you have a hardware you can tinker with and support the Pine64 community and all the projects, like Manjaro to get there in time to have a fully functional phone based on Linux. Why do you think we still work on the OS after we had our release of the Phone. Also it is called Community Edition. Which is meant for the community members of Manjaro and Pine64.

The PinePhone as it is now is not a end customer ready product. It is for developers and enthusiasts wanting the help out the whole community to get this goal at some point.

That was why I wrote it’s not stable.

I think we are on the same page then.
And yes it’s nice to have something to thinker whit.

Too much frustration was here.

The user bought the hardware with Manjaro OS on it. We never said the OS is ready. We are still in the early development state. Phosh is at version 0.5, which is beta stage. It might take another year to get it almost ready. We have tested the applications shipped with the phone briefly and did some basic functionality with it. You can receive calls and send text messages on some carriers.

The PinePhone as it is now is not a end customer ready product. It is for developers and enthusiasts wanting the help out the whole community to get this goal at some point.

I’ve excluded Android and IOS because I want keep my private data private. I’m happy to have a smartphone under Linux, my first smartphone. Now, I can have a Linux “Terminal”

even if the keyboard is always in QWERTY.

At this time, I can send a call or receive a call if the phone is not in deep standby : I can live for the moment with this. The main function of a phone is usable.

The real problem to continue to test a beta version is the missing possibility to have my contacts imported to make a call or identify the sender of a SMS. If I must use an application on my desktop to create a file and put it on the Pinephone, why not ?

I have only one SIM card, I don’t want to switch on my old phone

I’m waiting the next update to have a phone with a list of contacts usable. Could you put this on the list of tasks ?

Synchronisation of contacts worked through Google on beta 1

Iv not managed to sync contacts through nextcloud yet on eny builds.

I also only got 1 sim card like you and I don’t like swapping it from phone to phone so I have flashed beta 2 on the emmc and use it as my “main” os for now as long as call and text works.

I flash sd cards for testing and after playing around I remove the sd card and calling my anserwing machine to check if eny one has tryid to reach me.

I like plasma the most i like how plasma look like and functioning I like how you can minimise the apps and that I can see the desktop and how the app drawer works and looks but at this stage plasma is lacking behind. So I’ll have to wait for it to mature.

If you have images with both drivers then where is the clear information about it ?
What is wrong with the old driver ? It just works. While Megi driver not exactly.
Have you seen pine64 forums ? Most people have good experiences with Mobian but not with Manjaro.

Well, we are collecting patches from multiple projects and put it all together. We are also in close contact with the Pine64 developers during our packaging. Regarding the overall status of the Pinephone you may visit the website of the lead-developer Ondrej Jirman (aka Megi). You can readup on the modem driver here. So far it works perfectly fine on T-Mobile Germany network.

Have you seen how Mobian wiki looks like ? Hundreds of useful articles.

Our wiki is focused on the desktop OS. During development we have no time to document our efforts on mobile on a wiki yet. Most of the articles of the Mobian wiki apply also to our edition.

I love Manjaro and Arch.

Great to know. As we also work closely with the Arch project together and share our efforts. So if some is broken, you may join the Pine64 community and find a way to make it work better.