Yep. But that’s also true for, say, Manjaro’s grub efi located on $esp without encryption and Secure Boot signature. So anyone who has so-called “full disk encryption” is not that safe as he/she might think, and this brings us to the conclusion that such encryption is useless without bootloader and/or boot files being signed with a SB key in the first place.

This is why I mentioned “unified” images. It is a solution that makes sense to full disk encryption (with /boot files encrypted). It also prevents from attacker’s fiddling with cmdline options.

do people here seriously not read anything at all? I explained it like 30 times now that this is already how Manjaro works if you select nonfree drivers. What would the point of installing nvidia drivers on non NVIDIA hardware be? In this case you were actually on my side of the argument.

On my system by default was installed close drivers (video-linux) and i have sudden restarts , and when i close my pc one fan still works.
Now i had disabled and 5 days without restarts. 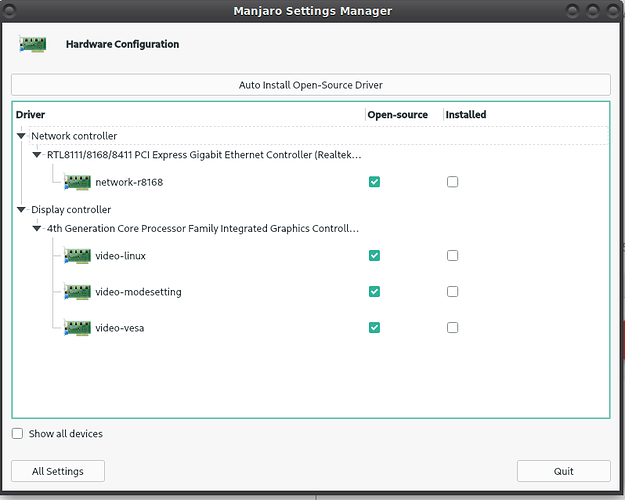 Your message is not relevant to the discussion and I suggest that you create a thread in #support instead.

Yes its done, it is a pity that non free drivers don’t boot and crash lightdm

Guess this is something to do with the new 455 driver. Moved from comment to OT by mod If you boot the iso and choose non free drivers it does not boot and lightdm crashes. Choosing free the iso boots. I use cinnamon on unstable and always build my own iso’s .

A post was merged into an existing topic: Comparison of bootloaders

Calling this commit “better naming for drivers.” is just wrong.

Isn’t nouveau abandoned anyway? Open drivers for nvidia atm are bugged and non-efficient, so at least make a better description for what you are going into with free drivers.