Hello,
English is not my first language, so excuse me, please

I installed Manjaro on a new Desktop PC a few days ago,
made some changes in the System Settings app and installed some software with pacman (including updates).
An hour ago i assume KDE crashed, for like the third time since Manjaro installation.
The effect is a black screen except that the previously opened applications seemed to still work for some seconds until they also crash or “go black”.
What i did today was just watching YouTube videos in Firefox.
Last Time i think it happened when doing the same, but I also used Android Studio on that day.
I always had a shell opened when that happened, so when i noticed the black screen around it i wondered, noticed that the Task Manager Panel was gone as well and tried to reboot.
The answer i got from the reboot command was “no permission” which was strange because it is configured to be allowed by my user, so with sudo something like: “can’t talk to initd” and “only logind available”.
Then the shell also crashed, or at least there was no visual output anymore.
I did not know what to do since it seemed like KDE somehow returned to the login daemon but gave no visual or textual input option. The hard shutdown it had to be after waiting about a minute or maybe 5 on one of the earlier crashes.

As you see in the CPU section i have simultaneous multi threading enabled, my best guess would be to turn it off, just not having a better idea.

So if you know about this kind of problem, let me know, please. I saw how to restart kde here and did that once when only my left Display got black (yesterday or so) which helped.
But i did not try to restart KDE instead of rebooting for this problem today, just because i did not remember how the command goes.
Other Topics in our Forum seem to only have black screens right when booting and i found nothing that also had this strange back to logind thing. 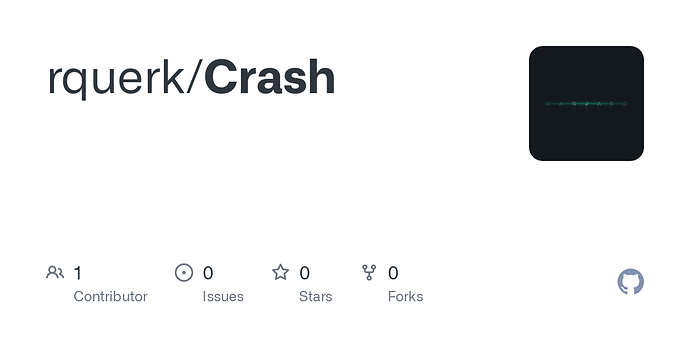 Contribute to rquerk/Crash development by creating an account on GitHub.

the Repository is public and there are 3 files, crash_logs is only kernel output, and the one with android is from another day.
Time of crash today around 17:45

As I said i have the AMD SMT turned on and i use kvm or better speaking libvirtd to emulate an android device in Android-Studio. I can imagine that all this is connected, so please tell me if you know further commands to check what might be set wrong.

Edit:
It also happens under X11, i tried to write the message about logind to a file but it said “read-only filesystem”, then i had to hard shutdown again.
I could not find a reason why KDE crashes or what causes this logout with no screen, nor do i have an idea what else to try.

Just a little extra note: I used xrandr to adjust my screens

I wonder so much because it’s a pretty fresh install, what did i do wrong, what might be connected to such crashes?
One thing that might be caused by the same miss-configuration is that my yakuake just does not want to remember to open only on screen 1, it always sets back to screen 2 after boot, and only the “follow the mouse option”, the default option, is not changed after boot.
I saw more than one topic about desktop-setting losses, so maybe that’s even another problem.

Thanks everybody for your time.

Plasma Wayland is unstable, switch to X11.
If you want Wayland, should use p.e. Gnome

i think wayland was just set as default, i will try that

Really? that’s should be new, idk.
Anyway, don’t trust me so much, wait for better answers.

do you actually know where the gui setting is for switching to x11, i know for sure that i saw that option but cant find it anymore,
this solution does not help, i dont see any “advanced tap”

It should be on login screen (SSDM)

thanks @VioletF but i now only found the option to login automatically but that is not actually what i want, that would skip the password 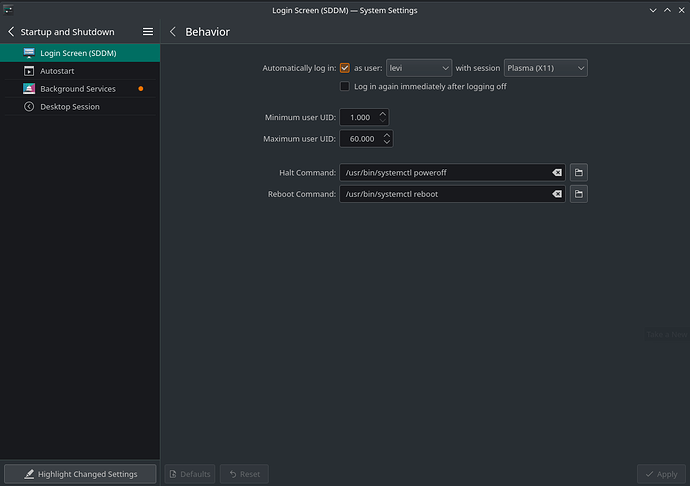 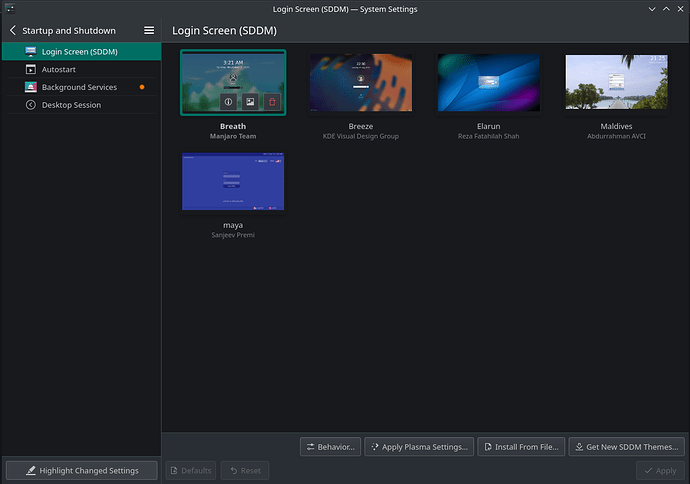 I meant, when you restart or log off, in the screen you write the password, it should be there, a menu to choose it.

i guess that’s it, on my laptop i run x11 for a few years now and it wasn’t that bad at least

@Bluntjaro See if this helps:

I can't close my computer Support

@potatoo This is a known issue from a long time which only happens on wayland. To verify you can switch to “Plasma (X11)” for sometime and check. Try the fix mentioned here:

I had to take away the solution marking, sorry ^^

it happened again, now with x11, but it was a bit diffrent:
i had no time to notice, everything got black and the monitors said “no signal”, which did not happen under wayland…

First, thank you for the hint.
I just wanted to say that i did not change the sddm.conf, i could not find any setting that makes no sense to me and since it should be the default - only not if the System Settings App changed it - i don’t excpect to make anything better by editing it.

I removed “matray” from auto start and added a 10-monitor.conf file. i guess the problem was matray, it was preinstalled

i think wayland was just set as default, i will try that

i think wayland was just set as default

No, not in the KDE Plasma edition. Wayland is only the default in the GNOME edition.

So i found an error in dmesg or journalctl saying something like “the cstate feature is not supported by bios”. After disabling that in my bios, I’m much more confident to say; the crashes are gone now.
Running my system now for about 8 month without such crashes.

As i understand Cstate is an energy-saving-feature for the cpu, and since my cpu does not support it, it caused the crashes when applications or manjaro requested the activation of cstate