Issues with updating to U-Boot

I followed the instructions to update u-boot, similar to this thread: Power button no longer works after uboot-pinebookpro-bsp upgrade

I did not have a recovery SD card ready, so I had to make one on my mac. After disabling the eMMC using the hardware switch, it will boot to the SD card, run me through the initial questions, but then it reports back “read only filesystem” and freezes after reboot. 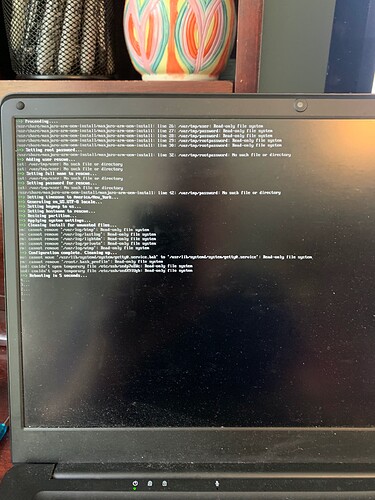 The SD card allows read/write on the mac that created it. (Disk Utility to format, Etcher to burn iso)

So I’ve got two issues:

Update. Used SD Card Formatter to do an overwrite format before installing the latest 22.04 Sway iso with Etcher. (Why sway? Because I’ve been wanting to try it. Why not make my life harder?)

Screen flashed some text and garbled graphics before booting up on the SD card. Now to fix u-boot…

Update: I dd’d the uboot files from the SD card to the eMMC, and was able to reboot from eMMC after taking the SD card out.

There must be some change in the settings from before, because it’s verbose on startup.

I tried syncing the latest uboot-pinebookpro-bsp from pacman, and dd’ing that per the instructions, and it bricked again.

Once again, I had to take the back off, turn off the eMMC, boot on the SD card, toggle on the eMMC a couple seconds after power on, and again dd the SD card boot files onto the eMMC. It works, so I don’t want to mess with it. 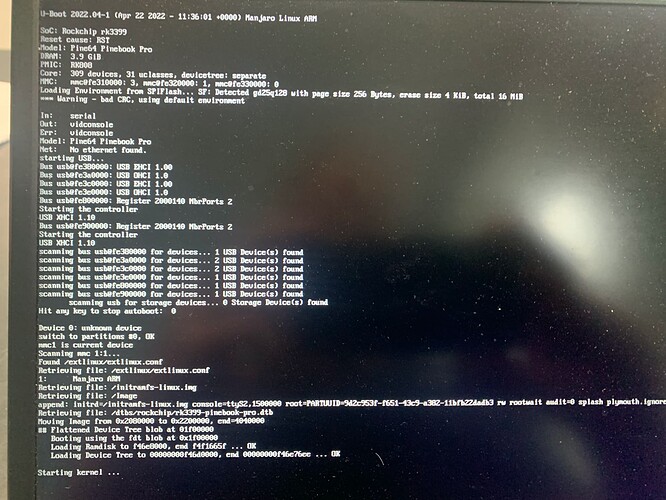 Hopefully I have a working setup and not a half-baked setup.