Internet Connection Cannot be established on a TP-Link WN821N

Hey guys , recently installed Manjaro and am fascinated by the wonders its has to offer but this issue has been a big one for me to handle since I am a absolute beginner in the Linux space so I figured it would be best to take help of those who are better aware of Linux then I am

I installed Manjaro 21.04 Xfce today on my machine . During the Live install I noticed that the Network Manager would display the available Wi-Fi networks but when connected to , will time out and say couldn’t connect to the network … I figured it might get solved when I install a copy of Manjaro on my PC but the issue persists even in the Installed version . I am using a TP-Link WN821N external USB network adapter which works flawlessly on Windows and even on some other distros of Linux Like Xubuntu and Mint …

My entire work is based on Networking and since I am new to Linux I really couldn’t figure out a fix , so any help suggestions and help would be appreciated

Could you open a terminal and type this:

Then we know, which chipset this is.

Sure thing mate .
I just have to paste
inxi -Nazy in the terminal , right ?

Here’s the output of the script mate …

Note :
I gained these results via a live install of Manjaro so if this was not how it was supposed to be please let me know since I had to remove Manjaro from the last time due to the network problem and have to use Windows for the time being …

Looks like a unified driver take place here and did not work properly:

You need to install an additional driver:

When done on a local installation, then simply reboot and it should work.

On a live session (temporary):

That looks like something that would work out !!
But the issue is that since I cannot connect to the internet so how do I access the links you attached while in Manjaro ? Maybe separately on a thumb drive ? Btw I have done installing Manjaro locally on my machine again …

And also you mentioned , “Install the headers” . What does that mean (sorry for being an absolute dumb head at this)? And what do I do with the drivers in the links you mentioned ? I mean how do I install them ? Like I know stuff in Windows so is there like any executable file like there is in Windows which I could simply run and install the drivers off ? That would be easy but I am willing to take any hard steps too …

Maybe separately on a thumb drive ? Btw I have done installing Manjaro locally on my machine again …

Well, this is not a binary, where you could just install it. Lemme explain:

The first link shows the AUR Repo. It contains the PKGBUILD. That is a recipe to build (compile) the driver.

The second link is the repo, which contains the source code of the driver.

(Both links are just there for reference, the commands below do the whole job for you.)

The linux headers are needed to be included at the building process, so that it fits your kernel. On every kernel upgrade, the driver must be compiled again (which is done automatically).

The really easy way is to have a temporary wired internet connection, install and build that stuff and then use the wirless connection, but it is also possible to download prepare that stuff before. But you need a bit more knowledge than just typing 3 commands on the terminal.

As I told you before am an absolute beginner and even worse in Arch-based Linux than In Debian so can you please just make it a little easier by telling what commands I shall input to make this work ?

As I told you before am an absolute beginner and even worse in Arch-based Linux than In Debian so can you please just make it a little easier by telling what commands I shall input to make this work ?

I will try to explain it:

Install the necessary tools for building:

After that there should be another file with the suffix *.tar.zst.

I didn’t test everything fully myself, but this theoretically what I do in this situation. If you stuck somewhere, just ask.

I’ll try that and update you on how everything goes ! Fingers crossed !

Ok , small doubt I have to do all of this is a live install in VirtualBox or as an Installed copy of Manjaro ?

After that there should be another file with the suffix *.tar.zst

And here you mentioned that a file with the mentioned suffix will be present … where is the location of this file ?

Ok , I tried all of the commands on a installed copy of Manjaro on VirtualBox and most of em went without a hitch but this one(even tried on the live install and gave me the error) …

You should install the base-devel group (pacman -S base-devel) to have (most) utilities for building packages.

Added that above. I must have forgot that. @Someone2305

Alright Got it , am installing all the tools rn thanks !

Ok , small doubt I have to do all of this is a live install in VirtualBox or as an Installed copy of Manjaro ?

And here you mentioned that a file with the mentioned suffix will be present … where is the location of this file ?

It is in ~/packages/rtl8192eu-git and in ~/packages. The tilde ~ stands for $HOME what would be for example: /home/manjaro.

Oh alright , got it thanks !

Ok looks like now the makepkg command is working perfectly but now can you please explain step 6 and 7 ?

That might be different on Windows, but you have to add a Share, and point to a folder which is on windows. This folder will be then available via samba on the file manager inside the virtual box. How it can be reached depends on your DE (KDE, Gnome, XFCE). 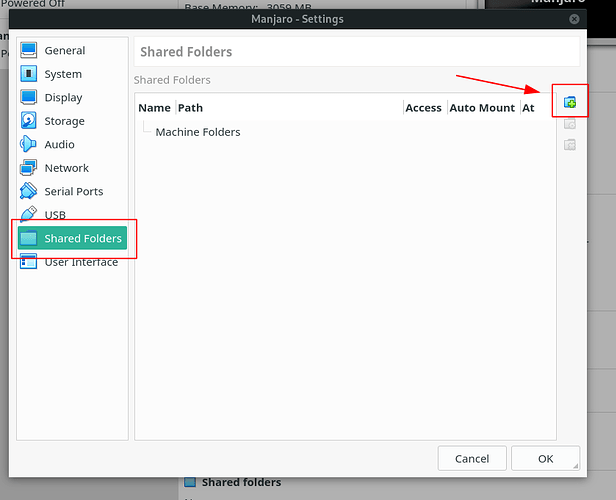 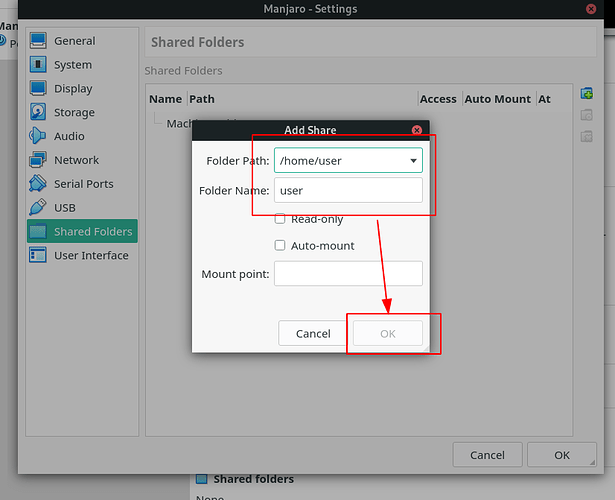