is this possible in manjaro gnome? I think workflow and function wise there could be better browers out there for my purpose.
Also it bugs me quite a lot that the alphabetical order does not work

is this possible in manjaro gnome?

(what) did you try?
AFAIK they all work.
… just not as nicely integrated and with consistent look and feel, of course

I use mc - works everywhere

I use mc - works everywhere

And as a bonus, it’s extremely powerful.

just not … with consistent look and feel, of course

What do you mean -

- it look the same every time I open it.

it look the same every time I open it.

Same here. MC has always looked the same to me, a nice blue background with white text. 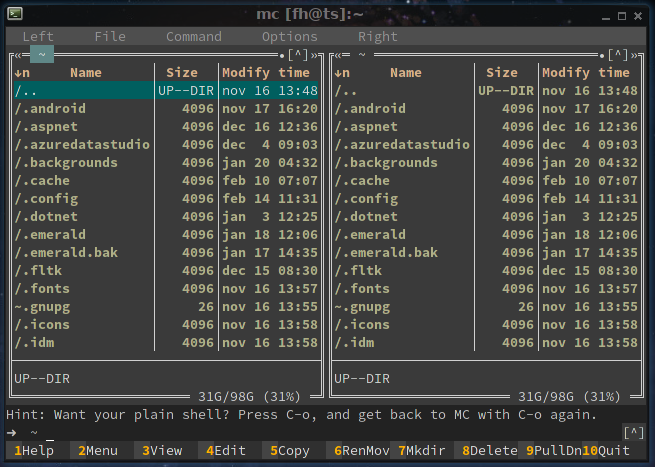 you get tired of the standard blue

Tired of it doesn’t make it non-consitent. In fact, it’s consistency that can cause you to get tired of it…

we are so much off topic now - back to business

alphabetical order does not work

What do you mean?

Is it the filedialog used when an app want you to navigate the folder structure?

After being on KDE and Cinnamon for months, I finally settled with Gnome.
But Files/Nautilus is lacking so much functionalities…

I installed Nemo and it works and integrates perfectly fine within Gnome.
There was just a tweak to perform in Dash to Dock.

I’ll say you may install whichever file manager you’d want. Maybe avoid Dolphin, it would be awkward in a Gnome system.

ok, thanks for all those answers! I was a bit unsure how to do it and didnt find something specifically about manjaro gnome. So I can just install it normally from add/remove software? Do I have to uninstall Files then?
One time I managed to somehow destroy my entire operating system just by installing or uninstalling something there so nothing was working anymore, so now I want to be carefull with something as fundamental as the filemanager haha

just in a regular files window. ive set it to sort after name and then in orders the files in a useless way like b,c,d,f,j,l,m,p,r,w,b,g,m or in another folder its 0,d,e,g,p,s,z,v,f,g,h,m,n,p,q,s,t,w
so its a little bit alphabetic, but not enough for my taste

Do I have to uninstall Files then?

I tried that in my first attempts.

But Files/Nautilus is still imbricated within Gnome environment, and without it, the Desktop view doesn’t work.

Just let it there, the new installed File manager will take precedence.
As for me, thanks to Nautilus-admin I think, the Desktop view is working (icons on Desktop), even if folders open with Nemo.

I just installed Nemo (and optional Nemo plugins) from add/remove softwares and that’s it.

According to specific use cases, you may have to tweak a little, but overall, it’ll work by itself.

ohhh it seems to consider/separate upper-case and lower case letters!?
This doesnt make any sense to me. Can this be turned off?

That is standard behaviour in Linux.

And just like humans, the capitals come first. So its ‘L’ the ‘l’.

ok, but at least now I know how to deal with it

Yes, you just need to install whichever you want

anybody got pantheon to work? Somehow it didnt take effect after installing and rebooting. I’m pretty used to and love the column view like in mac os.
Nemo seems to work already though. Seems nice so far, but now quicklook with space bar, arrghhh