Alright, at this point I am about to re-install my laptop from scratch, so this is a last straw, hoping someone can help me fix this…

When you upload a document in MS Office format (or Open Document Format, for that matter) in Google Drive and you right-click the file in Drive, you can choose to open the document in Google Docs, Sheets or Slides respectively. This works as expected on my Manjaro desktop.

However, when I upload a file from my Manjaro laptop to Google Drive, it insists that there are “No available apps” for opening that file when I right-click it.

So uploading the file works fine and after downloading it, I can open and use it with LibreOffice or WPS Office as usual, no problem either. It’s just that when uploading from my laptop, I can no longer open that file in the Google Suite office apps.

So something is borked on my laptop, but this is so insane that I have no idea where to start looking. And searching for a solution on the web has proven fruitless. So… anyone?

I have a .docx file.
I dropped it in my Drive>tmp folder.
When I right click that I get: 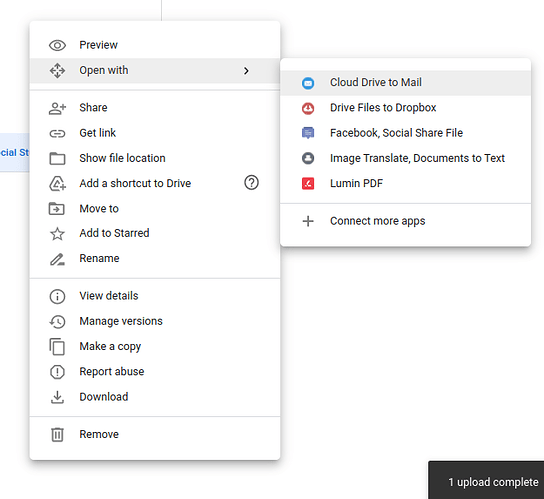 .doc and .docx are not supported by Google Drive - it won’t open on an ipad either.

So uploading the file works fine and after downloading it, I can open and use it with LibreOffice or WPS Office as usual, no problem either. It’s just that when uploading from my laptop, I can no longer open that file in the Google Suite office apps.

If you said ‘Uploading the file works fine and I can open that file in the Google Suite office apps’ I’d stay with you.

But you’re saying you can upload, download and edit - which is not surprising. But I don’t understand ‘when uploading from my laptop, I can no longer open it with Google Suite’ - seems irrelevant. That won’t work from my desktop either… and I just tried with a docx, also saved as a doc - it doesn’t work.

Okay, let me try to explain

When I upload a .docx file from my laptop which runs a fully current Manjaro Cinnamon Stable install, I get this situation: 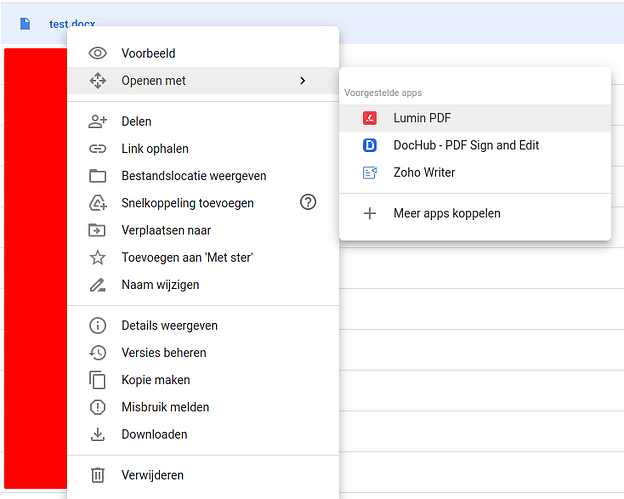 Notice how the file icon is flat. When I choose to “Open with” I cannot choose to open it as an editable document in Google Docs. This behavior occurs in both Firefox and Chrome/Chromium browsers.

Now, when I go downstairs to my desktop/game PC which runs a fully current Manjaro Cinnamon Stable install and I upload the exact same test.docx document, I get this situation: 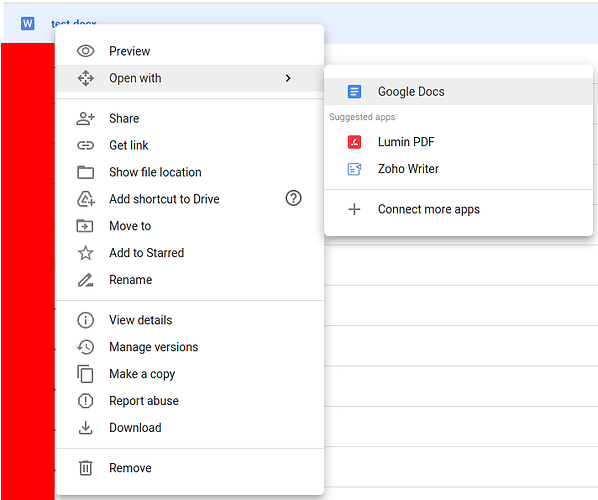 Note how the file icon is now a “MS Word” icon. When I choose to “Open with” Drive shows me the Google Docs app and when I choose that option, it will open as an editable document right in Google Docs.

So yes, Google Suite natively supports opening and editing MS Office document formats (and has for quite a while). But something on my laptop borks that functionality when uploading files.

I mentioned that on my laptop I can still upload and download the files to/from Drive and they work locally when downloaded, just to explain that the files are not somehow totally corrupted. Only the functionality to edit MS Office files directly in Google Suite is broken.

And the weird thing is: this used to work on my laptop too! It somehow suddenly became broken at some point.

[Edit: and just to be sure, it doesn’t work on Midori and Opera either on my laptop and Google won’t let me log in with Falkon as that browser is deemed “not safe”.]

[Edit 3: Oh, I just realized I should add this detail: a) when I upload the test.docx file from my laptop and then try to “Open with” on my desktop PC, it also shows the flat document icon and doesn’t show the option to use Google Docs, b) but the reverse situation is also true, when I upload the test.docx file from my desktop PC, on my laptop the file shows up with the Word style icon and I can open the file directly in Google Docs.

So, conclusion: something is broken when uploading the file on my laptop, but there is nothing inherently broken on my laptop about being able to open MS Office files in Google Suite apps.]

Interesting - on my desktop I don’t get this option either. No other answers?

Interesting font… but it should take you to office-editing and after that I get the option to edit (BTW when I use Drive, it opens as a Chrome app, not Firefox).

Something is still quite badly broken, even with the extension.

Normal operation without the extension on my desktop PC:

Operation with the extension:

So the conclusion is that whatever is broken, is still broken on my laptop.

The extension offers some functionality, but not the functionality I need to work and collaborate on documents for my employer. I guess I have to book a day off in my work calender to back up and reinstall my laptop.