“EFI variables are not supported on this system. grub-install error: efibootmgr failed to register the boot entry: No such file or directory”

This is the problem can anyone help me?
I have no idea what this means…
I am trying to install by cancelling everything else on SSD, is there something wrong I am doing?

EFI variables are not supported on this system.

I think you’re booting via legacy BIOS mode instead of UEFI mode. You need to boot it in UEFI mode.

(someone can chime in if I’m wrong)

thanks, that’s in “sync” with what I found so far, but I can assure you, my bios is in UEFI mode, so I don’t know what’s happening here.

When you select your USB stick to boot in, do you select the UEFI one? For me, my BIOS gives 2 options to boot in to the USB.

I’m sure I did, I put my BIOS in uefi only mode anyway

could it be something wrong during the process of putting the files inside the usb flash drive?
I have used rufus, isn’t that good?

What happens if I just create a /boot partition instead of /boot/efi partition?

Are you trying to install alongside Windows 10 by any chance? Beucase I had the same exact problem. It was solved HERE

No I am not, Windows 10 has been erased from the SSD

Also might a be good idea to format the drive before installation or to erase the disk from the Manjaro installation.

OP has already done these.

No I am not, Windows 10 has been erased from the SSD

Make sure to change the default settings in Rufus: 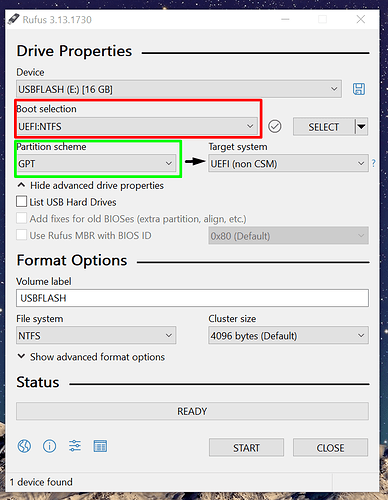 Rufus defaults to MBR (which is NOT what you want, you want GPT + UEFI).

Not sure if you’ve done it but when I had this problem it was because of this.

I’ve reformatted in gparted as GPT and it worked, thanks

I’m afraid it didn’t work for me. I think I’ve done everything suggested in this and other similar threads … including disabling secure boot in the bios and reformatting to GPT in gparted. But I still get the dreaded bootloader error when trying to install onto an Acer laptop. Messages like “grub install returned non-zero exit status 1”, “Could not prepare Boot variable: interrupted system call grub-install”, “efi bootmgr failed to register the boot entry.”
Surely it shouldn’t this problematic to install Manjaro from the official image? What am I missing?
Any help gratefully received, otherwise I’ll never get this laptop off the live usb.

Please open your own thread and we can help. You can reference what you’ve tried in your opening post.