Those of you who like the global menu in KDE Plasma will have already noticed that neither Firefox nor Thunderbird export their application menu to the Plasma global menu widget out-of-the-box. And indeed, in their original form as they ship from Mozilla, these two popular applications do not. But that doesn’t mean that you’re stuck with an inconsistent look & feel on your desktop.

The thing however is that you must not be using the stock Firefox and/or Thunderbird anymore, but that you must instead use one of the specially patched versions of these two software titles. This HowTo is intended to present you with the alternatives that do play nice with KDE Plasma.

Firefox is the Mozilla application where you have the most options, because there are four versions with global menu support in the AUR (“Arch User Repository”) that you can choose from, as well as a standalone version ─ the one we’ll address here first ─ which was specifically developed for Manjaro.

Plasmafox was specifically developed ─ and is still being maintained ─ for Manjaro by a former forum member, Torvic9. It is based upon firefox-kde-opensuse from the AUR, with special privacy enhancements from Waterfox, which itself is another Firefox fork.

You can download a readily installable Manjaro package of Plasmafox here. Be sure to then also download the Plasmafox Helper package for further Plasma integration. 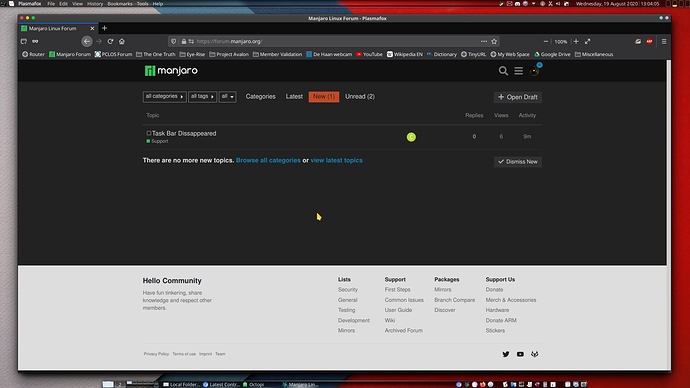 Manjaro stable branch is NOT supported! (EDIT: binaries, that is. You’re free to build your own, or drop system libs by commenting out the relevant lines in mozconfig )
It hasn’t been for several months, if not a year.
Use testing, or better yet, unstable.

He does however believe that it’ll most likely still work in the Manjaro Unstable branch.

This is the patched Firefox that Plasmafox is partly based upon. The package can be downloaded from the AUR, in two versions:

Unless you’ve got loads of RAM to spare and you have a very fast computer, you will almost with certainty want to choose the latter package, because ─ like with most software from the AUR ─ the first package comes as source code only and must be compiled on your own computer.

When I was still new to Manjaro, I once made the mistake of picking the source code version ─ there may not even have been a pre-compiled binary version of it at the time ─ and it took my computer a whole five (5!) hours to compile and link the source code and turn it into an installable package, with all RAM maxed out, 80% of my swap partition filled up, and all 6 cores of my i5-8400 processor running at the full 100% load. And all the while, the system was completely unusable for anything else.

So, again, unless you’ve got a very powerful machine with loads of RAM ─ say at least 32 GiB ─ you will most likely want to go with the pre-compiled version, i.e. firefox-kde-opensuse-rpm.

Same comments as here-above. It’s a package from the AUR, and it comes as both a source-code-only variant and as a pre-compiled variant. 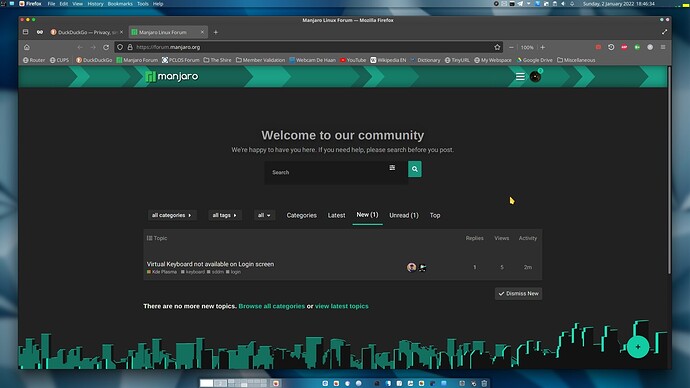 This version has global menu support patches from Ubuntu, given that Ubuntu uses GNOME as the default desktop environment, and Unity before that, and both GNOME and Unity have/had a global menu.

This version of Firefox is once again available from the AUR, but it comes as a readily installable binary package only. As the name says, the package is called firefox-ubuntu-bin.

firedragon is a fork of librewolf with the patches from firefox-kde-opensuse. There are two versions of it in the AUR.

Both of the above are supplied as source code only ─ so they’ll need to be built into binaries on your local machine, which can take up several hours, depending on your hardware ─ and if you install either of these two versions, then you should also build the firedragon-extension-plasma-integration and kfiredragonhelper packages from the AUR.

Analogous to Firefox ─ with the exception of Plasmafox ─ these are packages from the AUR. The offer is however a bit more limited than for its browser sibling.

How do I install any of these packages?

2. By way of the command line

This suggests that you use the command-line version of pamac, or that you have an AUR helper installed.

As an example, we’re going to be using the package firefox-appmenu-bin.

This command will first make sure that your entire system is fully up-to-date, including any AUR packages you already have installed and of which a newer version has been uploaded to the Arch User Repository in the meantime.

It is not necessary to prefix this command with sudo; in fact, yay will refuse to work if you do that, and instead it will prompt you for the root password when necessary. After making sure your system is fully up-to-date, yay will then download and install the package. No need to log out or reboot, because it’ll be readily available from the system menu right away.

If instead you prefer the use of pamac, then ─ using the same firefox-appmenu-bin package as an example ─ the command would be this…

While all of the above so far has been pertinent to getting global menu support in Firefox and Thunderbird, there is however something more you can do to have these applications further integrate with KDE Plasma.

You will need to log out of Plasma and log back in for this last setting to take effect, because the contents of the files under /etc/profile.d/ are only ever read at login time.

Hopefully this information was useful. Enjoy!

This HowTo is a wiki. Anyone can amend the information in this post.

29 posts were split to a new topic: Plasma Global Menu support in Firefox/GTK